Parliament of World's Religion: Day One! 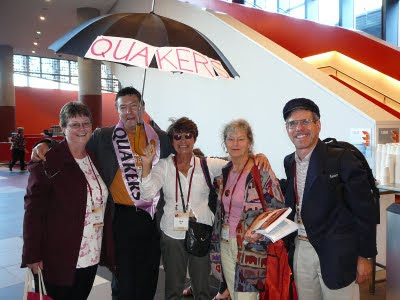 This gathering has been a life-transforming experience, and it's only just begun! I have been blown away by the amazing array of spiritual leaders who are attending this gathering, and by the quality of the program. During the opening plenary on Thursday night, an aboriginal elder danced and played the didgeridoo while the Melbourne Symphony played and singers from various traditions sang. It was truly awesome! There were benedictions by Jews, Sikhs, Muslims, Buddhists, etc. as well as speeches by various religious leaders and dignitaries. The program went on a bit long, till 10 PM, but most people stayed. This is a truly amazing event.

Over five thousand people are attending, and there are hundreds of workshops. I see parallels between the Parliament and the FGC gathering. Like the Gathering, the Parliament is an educational, not a deliberative body. It is bottom up, not top down in structure. Its goal is to build a world-wide grassroots movement—to build bridges, raise awareness, and transform the religious culture of the world. An ambitious goal, but one that it is accomplishing not only by its five-year gathering, but by creating a network of “partner cities” that organize local events with a global perspective on interfaith work. It is exciting to be part of a movement that will change the world!

The workshop on “Listening with a Heart of Mercy”that I led went extremely well. The room was packed with over sixty people. Among them was George Hunsinger, the Princeton professor who has been leading the National Religious Campaign Against Torture, and several Friends from the US as well as from Australia. I showed the documentary “Compassionate Listening,” talked about my trip to Israel/Palestine with the Compassionate Listening project, and led the group in a compassionate listening exercise. My co-leaders were a Sufi and a Jewish filmmaker who work with me on the local chapter of the Parliament. They did an outstanding job of discussing how to overcome obstacles to deep listening through a process very similar to our Quaker clearness committee.

After this presentation, I went to Friends House in Toorak, where we had a potluck dinner and a time of fellowship and worship. Quakers were one of only a dozen or so religious groups to host such a fellowship opportunity, and they were the only ones to provide food. I love being a Friend!

At this Quaker get together I had a chance to talk with two other Friends who are attending the Parliament. One is a woman about my age from Massachusetts who will be part of a worship on forgiveness and reconciliation. She has been leading workshops on forgiveness developed by a priest from Colombia. The other person I spoke with was a young woman from Atlanta, GA, who was recently laid off by the AFSC and is attending seminary. She is taking part in the Parliament thanks to a grant provided by her seminary.

During my first day at the Parliament I attended some remarkable workshops. I took a workshop with Michael Lerner and had a chance to talk with him later about compassionate listening.. I attended a session in which Jim Wallis, Joan Chichister, Rabbi David Saperstein and others discussed what the religious communities need to do to help end poverty. I attended a session on spiritual healing led by aboriginal people which I found fascinating. I took this workshop because I will be giving a summer school class at Australia Yearly Meeting on “Healing, Caregiving, and Grieving in the Light.”

Such has been my first twenty four hours at the Parliament. There are six more days to go!
Posted by LA Quaker at 10:50 AM