I was very moved yesterday when Jill and I went to Santa Monica and saw Veterans for Peace taking down the crosses they placed there to remember those who died in recent wars since 9/11. Every Sunday, Memorial and Veterans Day since 9/11 these peace-loving veterans have faithfully placed crosses on the beach and reminded people of the cost of war.
I was also moved by Chuck Fager's essay entitled "Quaker Memorial Day" in which he tells the story of  Southern Quaker during the Civil War who paid a huge price for standing up for his convictions.
Many Quakers did go to war, but those who remained faithful to our Peace Testimony deserve to be remembered and honored on this day. On this day, I'd like to lift up Bill Lovett,  a beloved and respected member of the Pacific Yearly Meeting since coming to California with his family in 1965. A birth-right Friend whose family became Quakers in the time of William Penn, Bill was born in 1923 in Fallsington, a small rural Quaker community in Pennsylvania not far from the Delaware River. He has been a passionate pacifist all his life and served time in prison during World War II because of his uncompromising commitment to conscientious objection. Bill refused to seek CO status as a Quaker because he wanted CO status to be extended to non-religious people of conscience.  Bill became involved in helping low-income farm workers in the Central Valley build affordable homes through Self-Help Enterprises, a precursor to Habitat for Humanity.


I came to know Bill through the Youth Service Program that I helped to start for Southern California Quarterly Meeting and the American Friends Service Committee (AFSC). In 1994, I took a youth group to the Central Valley to do a project with Self-Help Enterprises and we stayed at the Visalia Meetinghouse. There Bill shared with us his amazing story, much to the delight of our young volunteers. I must add that when my wife Jill heard Bill’s story at a PYM gathering, she was so impressed she insisted we stop off in Visalia and record it. The afternoon we spent with the Lovetts at Quaker Oaks Farm was an unforgettable experience, Here's the story of how Bill came to be a war resister during World War II. When the draft was reinstated, Bill was an 18-year-old volunteer working an AFSC work camp in Mexico.
While Bill was in Mexico, the draft age was lowered to 18. All American males of draft age had to register. Bill and several of his friends decided to send a letter to the Attorney General saying that they would not register for the draft. This was a radical decision since by not registering Bill could face severe penalties, including prison. If he did register, he could receive Conscientious Objector (CO) status as a Quaker and would be eligible for a deferment. At most, he would have to do alternative service in a Civilian Public Service (CPS) camp. But Bill’s commitment to the Quaker Testimony of Equality prevented him from taking this easier route. He wanted every person of conscience to have CO status, not just those who belonged to historic peace churches like the Quakers, Mennonites, and Brethren
When Bill and his friends crossed the border, they were greeted by federal agents who immediately arrested them and detained him in Loredo, Texas. This was especially hard on Bill because he was suffering from amoebic dysentery and had to be isolated. The government (and even the AFSC) tried to persuade him to register as a CO. He was told that if he were tried in Texas, he could receive five years in jail and a huge fine. Bill was adamant, and so were his friends, Arlo Tatum (of Iowa) and Tommy Woodman (of New Jersey). Finally, after some pressure from their families, these three war resisters were sent back to their home states to be tried.
They were released on their own recognizance, as often happened in such cases. Bill took a bus back to Fallsington and stayed with his family while awaiting trial. Bill was tried in Philadelphia and received a three-year sentence to Lewisburg Prison, a maximum security facility in Northwest Pennsylvania.
“Being in a federal prison was pretty educational,” recalled Bill, smiling.
Of the 1,200 prisoners, 120 were there for refusing to be drafted. Many of the other prisoners were incarcerated for violating laws relating to alcohol—they were known as “moon shiners”. One of the most famous prisoners at Lewisberg was Dave Dellinger, pacifist and advocate for nonviolent social change, perhaps best known for being one of the Chicago Seven arrested for disrupting the Democratic National Convention in 1968. Dellinger came from a prominent New England family, attended Yale, Oxford and Union Theological Seminary. Like Bill, he was imprisoned for taking what some called an “absolutist stance”—refusing to register for the draft, even though he was also eligible for a CO deferment.
While in prison, Bill and others became concerned about the treatment of their fellow prisoners. They were especially disturbed by racial segregation: blacks and whites lived and dined in separate areas.
“Just because you’re in prison,” recalled Bill, “doesn’t mean you close your eyes to racial abuse. So we went on a work strike which eventually escalated to a hunger strike.”
Initially strikers were put in solitary confinement. They communicated with other prisoners by slipping hand-printed newspapers under doors. But as their numbers increased they were housed in a dorm of 15-30 inmates. Bill refused to eat for 30 days and eventually was force-fed by prison guards.
“They didn’t know how to deal with us” Lovett said, explaining how the threat of solitary confinement or loss of good time release was wasted on conscientious objectors who planned on spending the duration of the war in prison. “We didn’t fight, but we had moral issues. We brought a little bit of democracy into the prisons.”


They used their privileged status to get the attention of political leaders. Most of the inmates were abandoned by the families, recalled Bill, but he and his fellow war resisters had strong support from their family and their religious communities. They used these connections to pressure prison officials in Washington. The prison dining halls were ultimately integrated due to their efforts.
To learn more, go to https://www.createspace.com/4832073 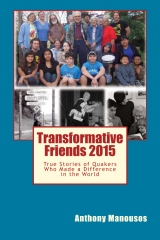