Why Bible study is important for liberal Quakers (and for me)

Many liberal Quakers don't like the Bible or see much value in studying it. Friends Journal recently published a scathing condemnation of the Bible by a member of our Meeting named Peter, who argued that the Bible is not suitable reading for children:


I have been dismissive of the Bible in the past for any age group. I saw no value in stories that I never for a moment believed came from the mouth of God or thought should be taken literally. They’re absurd; they contradict themselves; they are from a different time and culture and offer practices that are obsolescent.
Of course, many in meeting would agree with me but still believe in the truth of the Bible. I’m not arguing with them; there is wisdom embedded in these stories. I see that now. Whatever one may learn from the Bible, however, takes a level of maturity and experience that our children—by very definition of being children—are incapable of understanding. They are not equipped to deal with symbolism and nuance. The Bible is not a blunt instrument, though it seems the majority of people who accept it on face value use it as one.

My own experience with the Bible has been very different from Peter's. For many years, I helped my wife Kathleen Ross, a Methodist pastor, teach Bible stories to kids in a way that emphasized values like love, peace, and justice. We didn't use a sledgehammer to teach the Bible, nor did we demand that kids take it literally. We tried to show by our example that God is love, and the Bible is God's love letter to humanity.

As I taught these mostly unchurched kids, I was keenly aware that most of them had been brainwashed by video games and a culture that glorifies the myth of redemptive violence, as shown in countless Hollywood films. Our capitalist culture has also taught them that greed and competitiveness are good. What Kathleen and I taught using the Bible was counter-cultural.

Stories are the primary way that kids (and many adults) learn moral values. Developmentally, children are for the most part not not capable of abstract reasoning. That's why Hollywood plays such an important role in shaping the minds and hearts of children. And that's why myths were so important to the Greeks, and to indigenous peoples, and are still studied today as a source of wisdom.

Unlike these myths, however, Bible stories are a living sacred tradition that has an enormous influence on how people think and behave today. Nearly one third of the world's people (2.2 billion people) are professed Christians who see the Bible as a sacred text. Most see it as authoritative, as the "Word of God," an essential guide when making moral choices. There are over 1.6 billion Muslims in the world for whom the Bible narratives about Moses, Abraham and Jesus are sacred texts (albeit told in a revised form in the Quran). There are also 14 million Jews in the world for whom the Torah is a source of their identity and moral values, whether or not they believe in God.  For this, if for no other reason, the stories of the Bible need to be taken seriously.

For early Quakers, as for most Protestants, the Bible was essential reading. It is virtually impossible to understand early Quaker writings without knowing the Bible since the Bible is quoted constantly.

I agree with Peter that the Bible has sometimes been used as a blunt instrument, both figuratively and literally. In fact, George Fox 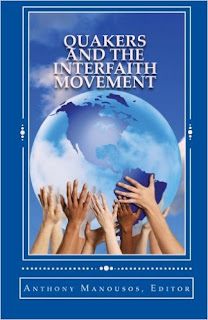 was once beaten up with a heavy, brass-bound Bible for preaching a message that his listeners didn't like. I believe it is important to know Scriptures so we can speak to those who interpret it in ways that are violent and hurtful. That's why I wrote "A Quaker Perspective on the Qur'an and the Bible" which was published in Quaker Theology (see http://quakertheology.org/issue14-manousos-01.htm). I wanted to show how these Scriptures can be read from a Quaker perspective. But I also wanted to show that certain passages in Scripture have been used to justify violence. If we want to work for peace and justice, we need to explore and understand how the Bible has been used for both good and bad purposes, to bless war and violence, and also to oppose it. 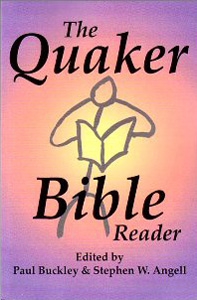 I believe that liberal Quakers can benefit from learning how to read and appreciate the Bibleas as a source of authentic wisdom. That's why I attend Bible studies at FGC and Yearly Meeting and have started Bible studies in my home meeting. My life has been enriched by wise teachers of the Bible like Steve Matchett, Max Carter, Doug Gwyn, Paul Buckley, Stephen Angell, and others.

Sometimes Bible studies can have unexpected consequences. Many years ago I started a Bible study at Santa Monica Meeting, where most Friends had opinions about the bible similar to Peter's. I faithfully convened a small group, sometimes only two or three Friends, each month and sometimes felt discouraged. Why are so few attending? Am I making any difference? A Friend who had never read the Bible before became intrigued by what she was learning in our little class. She started attending bible studies at Yearly Meeting with Steve Matchett. Now she is leading Bible studies, using the "Friendly bible study" approach. Sometimes seeds that are planted in good soil bear amazing fruit!

Jill and I started a Bible study at Orange Grove Meeting around the beginning of this year. There are only a few faithful attendees, but our discussions has been lively and deep. Burt Newton, Mennonite peace activist and author of the "The Subversive Wisdom of John's Gospel," joined us for one of our sessions and shared with us his radical understanding of the Gospel of Matthew. Maxine Kaufman-Lacusta, a Jewish Quaker who has written Refusing to be Enemies, a book about nonviolent resistance in Israel/Palestine, recently joined us for a discussion about Abraham and his two children, Isaac and Ishmael. This story has been interpreted as a rationale for enmity between Jews and Arabs, but we looked at it from a different perspective that emphasized God's love for all God's children. Our Bible study is small, but mighty. I feel confident that it will bear some very good fruit!

I am glad that we are exploring the Bible in a Quakerly way. There are no "experts" telling us what to think or believe. No one has to believe literally in what the Bible says. We just have to be respectful of each other's views and listen for what Spirit is teaching us. Everyone has a chance to share. We are convinced there is "that of God" in each of us.

As we deepen our understanding of the Bible, of God, and of each other, I am confident that we will grow spiritually and become better Quakers. We will be able to dialogue with our fellow Quakers who are Evangelical Christians in a way that's respectful and friendly.  As we grow towards the Light, we will come to see the truth of what Paul says in his second letter to Timothy:

"All Scripture is inspired by God and is useful to teach us what is true and to make us realize what is wrong in our lives. It corrects us when we are wrong and teaches us to do what is right." (2 Timothy 3:16).

There is of course much more that could be said about the Bible. For example, for most Christians, the Bible is more than just a source of ethical and moral teachings, it is also the story of God's redemptive role in history and in personal lives. But to do justice to that understanding of the Bible would require another blog entry....To be continued....

For those curious about the 7 most Quaker Bible verses, check out this "Quakerspeak" video: