William Penn and the Indians 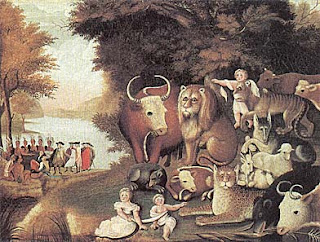 One of the myths of America is that the Pilgrims and the Indians had a "kumbaya" moment during the first winter after the Mayflower landed at Plymouth rock. The reality is that the Puritans were aggressive and hostile towards the local Wampapoags even as the first people made every effort to be hospitable and welcoming. Miles Standish even beheaded an Indian and committed other atrocities, for which his descendent has apologized to the Indians. The word "Thanksgiving" was used by the Puritans only after a military victory in which Indians were slaughtered. For the true story of the Pilgrims and Indians from an Indian perspective, see http://www.danielnpaul.com/TheRealThanksgiving.html


The story of the Quaker encounter with the Indians is less well known. In fact, it is hardly known at all by most Americans, and is never told in schools. Nonetheless, it is very instructive and much more hopeful.
The icon of the encounter between Quakers and the Indians is Edward Hick's "Peaceable Kingdom." In the foreground it shows the scene from Isaiah in which the lion lies down with the lamb, and the child can handle snakes and other animals without harm, and there is peace in all of God's creation. In the background, Penn is signing a peace treaty with the Indians--a peace treaty which, unlike virtually all others whites made with the Indians, was never broken. The message: the Peaceable Kingdom requires us to have peaceful and just relationship with the first people of North America (whom Penn equated with the lost tribe of Israel). This belief is at the heart of our Quaker faith.

Penn wrote a letter about his encounter with the Indians which ironically begins by saying he was treated with more kindness by the Indians than by many people in England! Penn along with other Quakers went to prison for his religious beliefs, and many Quakers fled to Pennsylvania to escape persecution.

Pennsylvania was not only a place safe for Indians, it was a haven for people of all faiths. (That is, until non-Quakers came and began fighting the Indians.)

Penn took pains to learn the language of the Indians and study their culture. He not onlythought the Indians were the lost tribe of Israel, he also believed the Indian language was similar to Hebrew. He describes the Indians and their customs in great detail and with much sympathy, which I think you'll find fascinating.

This was written ten years after the "King Phillip's war," in which the Puritans massacred the Indians--perhaps as many as 27,000, leaving only a remnant (3,000) alive.
I hope we take to heart what really happened when whites and Indians encountered each other, and listen to what the first people have to tell and teach us.
Posted by LA Quaker at 8:59 AM