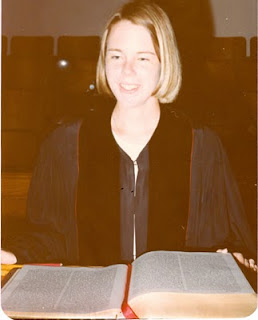 As Easter approaches, I can't help thinking of the person who had the greatest influence on my spiritual life--the one who taught me how to live as a Christian, how to love as a Christian, and how to face life-threatening illness and death as a Christian. I mean, of course, my beloved wife Kathleen of blessed memory.

This year, as I sorted through our "memorabilia," as she liked to call it, I found an audio-cassette with one of Kathleen's most moving and memorable sermons--her spiritual journey, which she shared at the Orange United Methodist Church twenty years ago. This is the church in which she grew up and which always held a special place in her heart. She gave this sermon in 1989, not long after we were married, when she was 37 years old. She had already served five churches by this time and had found her voice as well as her vocation as a preacher as well as a practitioner of the Word. She speaks from the heart about how the church helped her to grow and mature in her faith, enabling her to become all that God intended her to be. For Kathleen, the church--the community of believers bound to each other and to God through unselfish love--is what our Christian faith is all about. 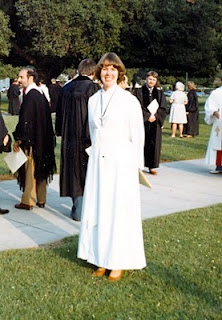 Kathleen’s Life in Her Own Words


[Kathleen wrote the following account of her life in the year before she died, with the intention that it be read at her memorial.]


I was born July 20, 1953, in Santa Monica, California, the first child of Gwendolyn Irene Fenwick and James Arthur Ross. From the beginning my two brothers, Jim and David, and I learned to “travel light”, moving to from Hollywood to Sherman Oaks, San Fernando, and Orange before settling in our parents’ custom-built dream home in Villa Park in Orange County.

My parents Jim and Gwen put a high value on education: I was given lessons in ballet, flute, piano, sewing, raising rabbits and cooking and sang weekly in the children’s choir at First United Methodist Church in Orange, where I was confirmed at age 13. I learned to dance The Lord’s Prayer in one of the first liturgical choirs in the United Methodist Church. My soul was nurtured by the experience of God in nature, church family camp at Wrightwood and powerful experiences of the personal presence of Christ.

My family experienced a major crisis in 1967 when our home burned to fine ash in a major brush fire, which burned 20 miles from Corona. Only family pictures were saved along with my silver flute and 3rd grade Bible and a few other precious belongings. But this was a powerful lesson in Christian love, for the members of Orange First Methodist Church held a housewarming to restock a rental home they helped my family to find so that we could start again.

My family moved to La Jolla where my brothers could find relief from severe asthma. My flute and piccolo got a good workout when I was accepted by the San Diego Youth Symphony which traveled throughout Europe as part of the first International Youth Festival, held in Saint Moritz, Switzerland. I was President of the youth group at La Jolla United Methodist Church.

I graduated from the Bishop’s School in 1971, and attended the University of Puget Sound in Tacoma, Washington for one year and spent the summer in Provence in southern France to become more fluent in French. My dream was to become an English teacher in France. I transferred to Smith College in Northampton, Massachusetts, where I changed my major to comparative religion and graduated in 1975.

Jobs for religion majors were hard to find that year when I moved to Philadelphia, but after nine months searching for work, I garnered a job for two years as secretary to the Chief of Hematology-Oncology at the Hospital of the University of Pennsylvania.

At this point the pull toward seminary could no longer be resisted. However, I firmly told the admission director at Duke Divinity School in Durham, North Carolina that I had no intention of being ordained. It wasn’t until my last year of seminary, spent at the University of Edinburgh, Scotland, that I finally gave in to God’s call to full time ministry.

But where to serve? Clergywomen in the South in the 1980s were sent to serve 4-point charges –one pastor for four rural churches. So I headed back West. I had an intern “learning experience” at First United Methodist church in Phoenix, holding three full-time associate pastoral positions at the same time for one year, and then was delighted to be hired by Community United Methodist Church in Huntington Beach to be mentored by Revs. Dick Burdine and Virginia Fifield.

Finally I was given a church of my own at Pomona Westmont United Methodist Church, which took a step in faith to host a new Chinese Methodist Fellowship. I lured Rev. Kathleen Puntar to join me for six years as co-dean of the Riverside District Elementary Camp at, of course, Wrightwood. My experience with the Walk to Emmaus Weekends resulted in an outpouring of the Holy Spirit, transformed my prayer life and focus of ministry.

Then a call came from God to explore retreat center ministry. My parents sacrificially traveled with me for one month across the US and Canada visiting 35 retreat centers. Then I began a nine month program as a student at Pendle Hill Retreat Center, a Quaker community outside of Philadelphia. I had thought God’s call was to help the California-Pacific Annual Conference to build a retreat center, but it seemed that what God really had in mind was for me to meet fellow student Anthony Manousos.

When the program was completed, Anthony followed me back to California, and on December 31, 1988, we were married at Claremont Quaker Meeting with a reception at Torrance First United Methodist Church, where I was serving as associate pastor.
That was a year of other great changes. My mother Gwen died of cancer at age 57, and my dream for a Conference Retreat Center had to be abandoned. On the plus side, my fascinating new husband’s peace work resulted in a breakfast at Norman Cousin’s home, and a dinner at a conference in Washington, DC where I conversed with notable Soviet writers, “Superman’s” father, Frank Reeves, and Garrison Keilor! The day the Berlin Wall fell, a delegation of Soviet young adults were hosted for dinner in the Social hall of Torrance First United Methodist Church!

Rich years of ministry followed at Del Rosa United Methodist Church in San Bernardino, during which time I accompanied Anthony to the former Soviet Union as part of a Quaker youth project. We returned to the US just a few days before the revolution in Moscow which ended the Soviet Union.

Del Rosa was a nurturing place for ministry to youth and children. In addition to my pastoral duties of worship and visitation, I began another Kid’s Club and started weekly chapel for the church’s preschool children, as well as helping to plan the excellent annual Church Family Camp (again at Wrightwood!). A strong fellowship of clergy had began the first Interfaith Clergy Association, of which I became the first woman President. Interfaith work became my passion ever since. On days off Anthony and I enjoyed many hikes and kayaking afternoon at Lake Silverwood, and Lake Gregory, and began to make frequent trips to visit our nieces, Adriana and Capri daughters of brother David and his wife Katherine.

Over the next few years I served a variety of churches as I sought to discern God’s will for my next focus in ministry. Bellflower UMC, Whittier First UMC and Montclair UMC helped clarify the changing ministry in the 1990s. Each appointment brought new challenges, blessings and learning opportunities as I worked to establish children’s chapels and Kids Clubs. My ability to serve low income families expanded as I wrote grants and dug out new financial resources for those in need as a member of the Foundation of the California-Pacific Annual Conference. I enjoyed serving as a mentor for several candidates for ordained ministry, including Alena Uhamaka and Lee Carlile.

At home, Anthony and I became American “parents” for 17 Asian students over a period of five years. They came to Whittier College to learn English, and often asked me how to find a good husband, as they were impressed by the strong marriage Anthony and I enjoyed. Two of these students, Anna Kee and Hye-Jeong Ahn, became “honorary daughters”, and after their marriages produced “honorary grandsons”, Brandon Wong and Max Lee. My family expanded with the birth of my nephew to brother Jim and his wife in 2000.

When I was appointed to Walteria United Methodist Church in Torrance in 2002 the church experienced a spiritual revival and growth, thanks to a restarted Vacation Bible School, a new Kids club, the Alpha program and an expanded volunteer base for the monthly Community Hot Meal. The church formed a partnership with Presbyterian, Antiochan Orthodox, and non-denominational churches, as well as local high school service clubs to feed low income and homeless individuals who became good friends. Torrance Korean United Methodist Church started sharing the facilities for its brand new ministry in 2003 to become an important partner in a multicultural outreach to the community. Walteria UMC also won the award three times for the highest per capita mission giving in the Long Beach District.

When I was called by God to a sabbatical in June 2008 I was surprised when the “sabbatical” became a “disability leave” after being diagnosed with lymphoma cancer in July. I was grateful that my loving husband graciously abandoned our previous sabbatical plans to spend a 20th anniversary year at Pendle Hill in order to nurse me back to health. We were supported beautifully in prayer by family and friends, by Santa Monica Quaker Meeting and countless Methodist churches and interfaith congregations, as well as by Dr. Eric McGary and the excellent and caring oncology teams at Kaiser West LA, Kaiser Sunset, and the City of Hope in Duarte.

God is so good – all the time!

[These were the last words that Kathleen wrote. She died at the City of Hope in Duarte, CA, on May 24, 2009, after complications from her chemotherapy and bone marrow transplant. Her "spiritual journey" sermon is in three parts, in the video clips below.]