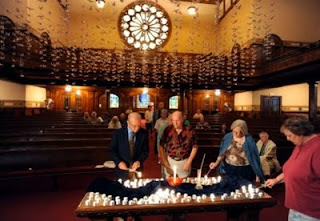 I was once again asked to give a short reflection on Hiroshima Day at the Long Beach Congregational Church. As you can see from this link, the sanctuary of the unabashedly liberal church is decorated with thousands of paper cranes. Each year religious leaders from different traditions are invited to speak about Hiroshima from their religious perspective. This year's speakers included a Tibetan-trained Buddhist nun, a Sufi, a Muslim woman, a Church of Religious Science minister, a Jewish woman, and a Quaker, yours truly. There is also music, worship, and a showing of a film about Sadako, the  12-year-old Japanese girl who became a legend after dying of leukemia, the "Atom Bomb Disease." You can see pictures of the church at http://www.firstchurchlb.org/cranes3.html.

I gave the following message linking Hiroshima and Fukushima. Afterwards, Nancy Nolan and Alan White (a Quaker from Orange County Meeting) came up to me with great appreciation since they had brought a petition calling for the closing of the San Onofre nuclear power plant. I am glad I was able to share a message articulating the viewpoint of many Friends, including Quaker Earthcare Witness, our national Quaker environmental organization.

Pacific Yearly Meeting has not come to unity about nuclear power, but PYM's Unity with Nature Committee recommended queries to help Friends (and others) have a respectful and meaningful discussion of this important issue. This minute is included after my talk.

As we near the advent of the 66th Anniversary of the bombing of Hiroshima on August 6, 1945, and the bombing a few days later of Nagasaki, it is hard not to notice grim parallels between what happened to Japan in 1945 and what is happening today. The tragedy of Hiroshima can be linked directly to the tragedy of Fukushima.

In 1945, the United States dropped their newly invented weapons of mass destruction, killing over 150,000 people and leaving tens of thousands more to die a lingering death. This act of unspeakable violence launched the Cold War and an era of nuclear terrorism that deeply traumatized Japan, and outraged people of conscience throughout the world. As a way to make nuclear power respectable, the US launched its “Atoms for Peace” program in 1953, which encouraged the development of nuclear power plants. Claims were made that these plants would produce energy “too cheap to meter” and be utterly safe.

We now see these claims were as false as the claim that we had no alternative than to drop bombs on Hiroshima and Nagasaki.

We are now told that in order to prevent global warming and to satisfy the desires of a world addicted to fossil fuel, we have no alternative but to build more and more nuclear plants, even though we still don’t know how to make them fail-safe or what to do with the spent fuel, which has the potential to cause death and disease for hundreds of thousands of years.

As a Christian and a Quaker and a human being, I grieve for the those who died and for those who are suffering from the lingering after effects of Fukushima and Hiroshima. Let us join with the mayors of Nagasaki and Hiroshima and say, “Never again.”

Let me quote from a statement made by a national Quaker environmental group called “Quaker Earthcare Witness”:

“We are horrified and saddened by the staggering physical, human, and environmental damage that has been suffered by Japan following recent major earthquakes and a major tsunami. We are deeply concerned about ongoing radioactive releases---with potentially severe global impact---from six heavily damaged nuclear fission reactors.

“The damage has exposed the vulnerability of many older plants like Japan's Fukushima Dai-ichi nuclear complex to disruption of vital cooling systems and breaching of containment structures. We join others in calling for the orderly shutdown of all nuclear plants….

“We call attention to a number of scientific studies that dispute the claim that fission-powered plants are "carbon-free" and therefore can play a significant role in controlling climate change, as well as the claim that radioactive releases during routine activities of the nuclear industry do not pose significant health or environmental risks.

“We also respond to the nuclear crisis in Japan in terms of the values that we find to be essential to a peaceful, just, and ecologically sustainable world. Fission-powered electricity, along with industrial agriculture and genetic engineering, emerge from a narrow, human-centered technological worldview rather than a proper understanding of ecological principles. These profit-driven enterprises are relics of Cold War-era thinking, which favors large-scale, centrally controlled systems. These tend to concentrate power and wealth at the expense of democratic values, community well-being, economic justice, ecological balance, and personal freedom.

“Proponents of nuclear fission and other advanced technological systems typically cite pressures to keep up with ever-expanding consumption and population growth. They do not acknowledge that on a finite planet, growth inevitably comes to an end, often tragically, and that the current economic model is based on endless growth. They tend to underestimate human fallibility and the limitations inherent in the laws of nature, including the law of unintended consequences.

“We encourage governments and nonprofit organizations to give priority to public education about the greenhouse gas emissions and radiation hazards associated with the entire nuclear fuel cycle.”

The statement goes on to ask each of us to “reduce our personal consumption of electricity that comes from nuclear fission and fossil fuels and to obtain the electricity that they do use from truly renewable sources as much as possible.”


We are also urged “to work individually and collectively with legislators and lobbying groups to encourage the development of appropriately scaled renewable energy systems and to eliminate subsidies for nuclear fission, coal, oil, natural gas, and other industries that are environmentally disruptive and ecologically unsustainable.”

Hiroshima Day is more than a look at the dangers of nuclear power, however, it is also an anti-war day and pro-peace day. Nuclear weapons were produced for war and have been used once in anger but now with many countries owning multiple warheads the risks of a nuclear war are even greater.

The exorbitant amount of money spent by the US government on the military continues to rob ordinary people of much needed resources for housing, welfare, fair wages and education. Hiroshima Day 2011 is a time for people of faith to get out and protest for an end to the nuclear war cycle and an end to war and preparation for war.


*****
Proposal to Encourage A Friends' Dialogue on Nuclear Power

The catastrophe at the Fukushima fission reactors in Japan has re-engaged Friends and others in responding to the use of nuclear power. Though Quakers have diverse views on this matter, it is unavoidably relevant in discussions about the challenges of increased energy demands, the need for sustainability, and the crisis of climate change.

Friends need to hear and understand each others' views on the use, expansion, or reduction of nuclear power. The first priority is not to reach agreement, but to grasp the underlying issues that might shape an informed opinion, relying on Friends' beliefs for guidance in the process of discernment. Some questions to consider include:

Inspired by our testimonies of simplicity and community, what might be realistic options in producing and consuming energy?

How might we balance the needs of the current generation with those of the future, and how do we maintain a healthy and livable Earth, as we use the energy we need?

What information do we lack, and how can we educate ourselves about nuclear power and alternative sources of energy?

In the coming year, we ask monthly meetings to hold threshing sessions, exploring and honoring varied opinions and looking for common concerns on these matters.
Posted by LA Quaker at 9:21 AM