Signs of hope in Meetinghouse and mosque... 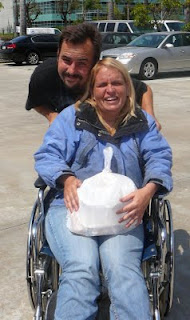 This week has been divine, thanks be to God.

On Sunday, I got up at the rise of Meeting and told Friends about my friends Melissa and Shawn, a homeless couple in Torrance that Kathleen and I have known, and loved, for several years. I reminded them that Melissa is living on the street because the $900 per month she receives from SSI isn't enough to pay for food and lodging, and because she has been waiting for Section 8 housing for 5 years. I told them I wrote a glowing recommendation of Melissa for her social worker. Melissa is a truly good person who doesn't use drugs or alcohol and often helps out her homeless friends. She loves her 10-year-old daughter dearly and Melissa's big dream is to have an apartment so she can take her daughter out of a foster home and live with her. A deeply believing Christian, Melissa often calls me and we pray together over the phone. But Melissa needs help. Her wheelchair is breaking down and because of Medicare cuts, she can't see a doctor for six months. I asked people to make a contribution and sign a card for her.

I love Santa Monica Friends not only because of they are generous and kind, but also because they stand up for justice. Last w 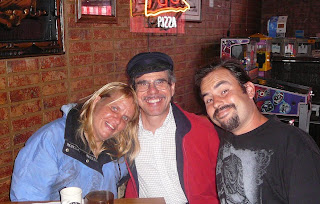 eek seven members of our Meeting went to Senator Feinstein's office to urge her to take a stand in favor of the House health care plan, especially the public option. I know that many Santa Monica Friends have been calling up their elected officials and letting them know the time has come to provide health care for all Americans!

On Sunday I went to an "Interfaith Celebration of Hope" at the Islamic Center of So Cal, where I saw many old friends and was pleased to learn that Dr. Jerry Campbell, the President of the Claremont School of Theology, was being honored because his school has decided to become an interfaith seminary. They plan to hire at least one Muslim scholar and a Jewish scholar to teach in this new program. This is certainly a sign of hope!

Also honored was Steve Gilliland, a Mormon interfaith activist, who is just back from a trip to Israel/Palestine and spoke with great feeling about the oppression of the Palestinians.

While in Israel, he went to the village of Bil'in, where Palestinians, Jews and internatonals are nonviolently protesting the confiscation of Palestinian lands and the erection of a wall separating them from their livelihood. He told us that last month over 200 masked and camouflaged Israeli soldiers swarmed into the West Bank village of Bil’in at 3 a.m. and raided five homes. Eight people were arrested, including Mohammad Khatib a leader of the Bil’in Popular Committee Against the Wall and Settlements. I applaud Steve's courage and passion for speaking out against these injustices.

Most of the talks were not political, however. They dealt with the theme of hope from a variety of religious perspectives--Muslim, Catholic, and Jewish. Among the speakers were Father Alexei Smith, Betty Cooney (a 7th day adventitst), Randolph Dobbs (a Bahai), and Jonathan Freund (Board of Rabbis). We also heard about humanitarian efforts that are being undertaken by different religious groups, including homeless feeding and micro-loans to people in developing nations. It was very inspiring.

After the talks, we had a time of prayer and then broke fast with dates and water. The non-Muslims were ushered upstairs for a magnificent feast. I got to sit next to my dear friend Gwynne Guibord, interfaith rep for the Episcopalian church. I had a nice chat with my Episcopalian friends.

In addition, I had an iftar potluck at my home on Satuday. Four Friends showed up and we had a good time. On Friday I went to Darlene's for a meditation session and we also had a potluck iftar. (Since Ramadan began, we have included a potluck with our meditation so that I would be able to attend.) I am grateful to Friends for supporting me during my Ramadan fast since I don't have Kathleen around any more to be my support.

This has also been a good week for writing. I am finally back in the swing of writing my Brinton book and have written nearly 10,000 words since Ramadan began--bringing the total to around 60,000 words. At this rate, the book may be almost complete by the time I go to Pendle Hill next month, inshallah.

Loving God, words cannot express the gratitude I feel for you bestowed upon me, especially Your presence in my life, the greatest gift of all being You!
Posted by LA Quaker at 6:08 AM