Memorial for Gene Hoffman this Sunday 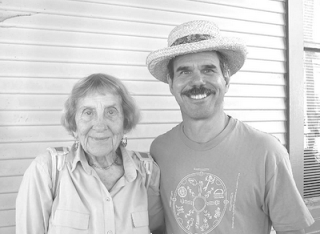 Gene was my dear friend and mentor, and I will be there "officiating" at the request of her family.

Here is her obituary--may she continue to rest in peace and may her life remind us not to rest until there is peace!

In Memoriam: a Tribute to Gene Knudsen Hoffman

On July 19, 2010, Gene died peacefully at Villa Alamar in Santa Barbara, California, where she had lived for six years.

Encouraged by her parents in the arts at an early age, Gene studied acting at the Pasadena Playhouse, in New York, and in Europe. She performed on the radio (including her long-running show, "Stories Children Love") as well as on stage, and her acting career continued through the 1960s.

In 1948 she divorced Ray and married Hallock Hoffman, the son of a prominent businessman and Republican political leader, Paul Gray Hoffman.

Hallock resigned his commission as captain in the Air Force and became the associate regional director of the American Friends Service Committee. Much to the chagrin of their conservative parents, Hallock and Gene became ardent liberals and pacifists.

Gene and Hallock became members of Orange Grove Quaker Meeting in Pasadena in 1951. Also at this time, Gene began writing a newspaper column and became involved in peace and social justice work. When she wrote a column favoring the United Nations, she was fired from her columnist job.

Gene took a strong stand on civil rights and sent her children to an integrated school in Pasadena—not a common practice for families of her background in the 1950s. When she published an article on her family’s experiences with integration, she was invited to become the first white columnist for the African-American newspaper the Amsterdam News.

Gene also took a controversial stand against the loyalty oath. In 1954, she became involved with a lawsuit against the city of Pasadena because it used a form requiring property owners to swear a “non-disloyalty oath.” The case was ultimately decided by the California Supreme court and the oath was removed.

The Hoffman family moved several times during the 1950s, following Hallock's job at the Fund for the Republic: the Center for the Study of Democratic Institutions. They lived in Pasadena, then in White Plains, New York, and finally settled in Santa Barbara in 1959, where Gene spent the rest of her life.

Gene and Hallock made their various homes into creative spaces. They offered their children art and music lessons, and had a room in the house dedicated to art and stocked with supplies. Gene read aloud to the children in the evenings while the children illustrated the stories she read.

Gene and Hallock also hosted many foreign exchange and some Native American students in their homes, and held classes and gatherings for young people.

Hallock and Gene threw legendary New Year's Eve parties; they wrote politically satirical plays and had friends act in them as part of the celebrations.

In the 1969, Gene had a nervous breakdown. She signed herself into a mental hospital, and afterward emerged with new insights that aided her on her journey to becoming a pastoral counselor. She wrote a book about her experiences called From Inside the Glass Doors.

Gene and Hallock divorced in the early 1970s.

Gene explored peace activism and various psychological and spiritual therapies in the 1970s. She was deeply involved in re-evaluation counseling, and she was instrumental in founding the Night Counseling Center in Santa Barbara. She also hosted the Peace Resource Center in her house, and created the Gathering Place there, a space where people who worked toward bettering the world could meet free of charge.

She taught poetry for personal growth and healing for many years in various venues around Santa Barbara, including at La Casa de Maria and the psych ward at Cottage Hospital.

Gene studied the philosophy of Martin Buber, was fascinated by the life of Muriel Lester, met with David Reynolds to study Morita Therapy in Japan, and went on retreats with Thich Nhat Hanh, buddhist monk and peace activist. She organized a retreat for Vietnam vets with Thich Nhat Hanh, and based the international program she founded, Compassionate Listening, on his teaching that " we must listen to both sides of any conflict before we take actions."

She traveled the world to study the peace movement and spent a year as a student at Pendle Hill, a Quaker adult study center near Philadelphia.

A member of the Fellowship of Reconciliation (FOR) for over fifty years, Gene traveled many times to the Middle East and the former Soviet Union during the 1980s and 1990s to do reconciliation work. She worked with the FOR on the Forbidden Faces and the Seeds for Hope projects in the former U.S.S.R.

Gene has published articles, books, and pamphlets about her experiences in Israel and Palestine, including Pieces of the Mideast Puzzle (1991) and No Royal Road to Reconciliation (1995).

When Alaskan hunters and fishers and indigenous people came into conflict over hunting and fishing rights, Gene helped to arrange Compassionate Listening sessions through the American Friends Service Committee (AFSC).

She has written extensively and given innumerable workshops and talks about peacemaking. Her work has inspired many others, including Cynthia Monroe, AFSC staff person in Alaska, and Leah Green, founder of Mideast Citizen Diplomacy’s Compassionate Listening Project. Gene has worked with such notable peace workers as Adam Curle, Herb Walters, Virginia Baron, and Richard Deats.

In 2003, her articles and essays were collected in a book called Compassionate Listening: the Writings of Gene Hoffman, Quaker Peace Activist and Mystic, edited by Anthony Manousos.

Gene summed up her approach to peacemaking: “The call, as I see it, is for us to see that within all life is the mystery: God.... By compassionate listening we may awaken it and thus learn the partial truth the other is carrying, for another aspect of being human is that we each carry some portion of the truth. To reconcile, we must listen for, discern, and acknowledge this partial truth in everyone.”

Dennis Rivers, a Berkeley-based web designer and interpersonal communications skills specialist who has made some of Gene's work available for free online, observed that Gene’s “calling was to carry pastoral counseling out of the pastor’s study into public life. What has energized her work over the years is the Quaker teaching that ‘there is that of God in every person.’”

Judith Kolokoff, former AFSC regional director in the Pacific Northwest, said of Gene: “She is a real prophet. And she’s a remarkable facilitator. She has the capacity to bring out the very best of the truth in each individual.”

Leah Green writes, " I honor you, Gene, for your remarkable lifetime quest in service to personal and collective healing. Thank you for your love, belief and investment in me personally, and in our wider community of compassionate listeners. You are and will remain the founder of Compassionate Listening, and the birth-mother of a movement."

For some of Gene's writing, see:

A memorial for Gene will be held at La Casa de Maria, 800 El Bosque Road, on Sunday, August 8, from two to four p.m.

In lieu of flowers, please make donations to the Compassionate Listening Project.