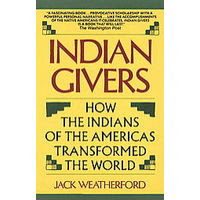 How can we thank the Native people this Thanksgiving for all they have given us? That's the question I have been asking myself this year. In the past I have deplored the fact that Euro-Americans mythologize and sanitize what happened when the Pilgrims arrived on territory belonging to the Massasoit people. I have contrasted the Pilgrims (whose descendants massacred Native people) with the Quakers, who tried to keep their treaties and never took up arms against the First people. See http://laquaker.blogspot.com/2010/11/william-penn-and-indians.html

But this year I want to stress the positive. I want to thank my Native American brothers and sisters for what they have given to us and the world. Many years ago, I was inspired by Jack Weatherford's marvelous book "Indian Givers" to lead a Methodist worship service in which we thanked the Indians on Native American awareness Sunday. I handed out a list of what the Native people have given us, from avocados to zucchini, including such things as chocolate, beans, tomatos, wild rice, rubber, lima beans, corn, etc. People then expressed gratitude to Native people for items on this list. It was an especially moving service since several Native Americans were present.

This year I am going to include as many Native American foods as possible on our Thanksgiving menu and remind our family to say "thank you" not only to God, but to the Native people who gave us these foods. We will have squash, succotash, corn bread, and of course chocolate--the greatest gift of all!

As I reflect on I owed the native people, including the land on which I live, I think of all the marvelous native people I have met and known, beginning with Jake Swamp, an Iroquois elder who came to Princeton Meeting when I first became a Friend in the early 1980s. Jake conducted a "tree of peace" ceremony at our Meetinghouse, and I later had a chance to visit him and his people at their reservation in Upper New York state during an FGC gathering. I learned about many of the things that the Iroquois Confederacy contributed to our nation, including ideas for our Constitution.

Over the years I have been enriched by the writings and spirituality of Native people--their concern for the land, for their elders, and for the Creator. I could easily write a book on what I have learned from my indigenous brothers and sisters.

This month a Native American elder, Sylvia Salazar, spoke to our Parliament of the World's Religion group and shared something I will never forget. Asked if the Indians celebrate Thanksgiving, she responded, "Our people celebrate Thanksgiving every day. Our prayers are almost always prayers of thanks for what the Creator has given us."

To which I can only say, "This Friend speaks my mind!"
Posted by LA Quaker at 8:19 AM