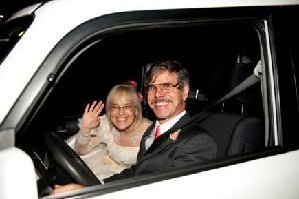 Jill and I want to wish you a joyful holiday as we experience our first Christmas as a married couple.  We are incredibly grateful for the miracle of love and how God has brought us and our family and friends together. Since meeting on Palm Sunday April 17th, 2011, we've had amazingly rich experiences: our whirlwind courtship, our mega wedding, our fabulous honeymoon in Hawaii (where we co-spoke on each of our books!) connecting with Anthony’s Quaker roots in Philadelphia, with Jill’s Missions Door colleagues in New York and with Anthony’s sister and her family in Princeton, where he grew up. We are greatly enriched by each other’s friends and spiritual traditions. It feels we are living out what Jesus said: “I have come to bring life, and bring it abundantly!”

Jill’s family—her Mom Donna and sister Jana and brother-in-law Dwight and their two sons Joey and Peter—came to celebrate Thanksgiving with us. We had a blast! We loved Anthony's idea of offering thanks for the various foods that our Native American brothers and sisters bestowed on us: corn, tomatoes, cactus, beans, squash, sweet potatoes, potatoes, pumpkin, wild rice, and of course, the greatest gift of all, chocolate!

The Advent season began with wonderful news. A couple with seven kids contacted us a few weeks ago, telling us that they were being evicted from their apartment due to the landlord going into foreclosure. Jill spent hours on the phone trying to help this family—we prayed—and our prayers were answered: they were accepted into the Family Promise! They entered the program on Dec. 4th--the very day they had to be out of their apartment and the day the network opened--after 3 years of organizing! Jill helped to recruit many of the 14 churches now part of the San Gabriel Valley network--the local expression of this nationwide program, whereby 2-4 homeless families are hosted by a congregation for a week, and are then rotated to the next congregation. Daily families seek jobs and housing at the Family Promise Resource Center. A full-time social worker works with them. We were blown away when 101 people came to the volunteer training Dec. 8th! We are thrilled to see such interest and how this family and others will now have a chance for a new life.

We are also grateful that the homeless survey we helped to conduct last summer has yielded good results. Twenty of the most at-risk homeless people in Pasadena have now been housed!

We are grateful that we have a warm and cozy home, and that it didn’t suffer much damage when winds up to 65 mph roared through our area on November 30. The shingles on our back roof were blown off, but they were old and needed to be replaced, and insurance will cover most of it. Anthony says: “It’s an ill wind that doesn’t blow somebody some good.”

During this unusually violent storm we offered Jill’s back house to a man who recently became homeless and was living in his car when the shelter where he was staying closed down.

Everywhere we turn, we see people who lack adequate shelter. That’s why we feel it’s important to revise Jill’s book on affordable housing. The need is huge, and churches are playing an important role to in realizing the goal of early Christians: "There was no poverty among them, because people who owned land or houses sold them and brought the money to the apostles to give to others in need." (Acts 4:34-35). Jill book will continue to encourage people to follow this example and do what it takes to “make housing happen” with the desperate need. At the Christian Community Development Association’s annual gathering this fall, Jill was humbled to learn that a young woman discovered her book in the office at Sojourner’s magazine and upon reading it decided to switch careers. She is now developing affordable housing for homeless youth in Minneapolis.

Jill published a feature article called “Seven Ways Home” in the December issue of Sojourners magazine. Anthony was very proud when Jim Wallis saw us both in an elevator and said, “Oh, you’re Jill Shook. You’re famous!” (You can read it online at http://www.sojo.net/magazine/2011/12/seven-ways-home)


Anthony has continued to be involved in his various peacemaking efforts. This year he published a book called Quakers and the Interfaith Movement and has given talks at various churches and other venues. During the summer he gave a workshop at the national Quaker gathering, Friends General Conference. One of our goals as a married couple is to host a weekly discussion series in Feb 2012 to look at biblical underpinnings of peacemaking. We will consider alternatives to war in the Bible, and how the church has been on both sides of this issue, both supporting it and playing a significant role in ending it.

On Oct 7 Anthony was arrested at a rally in front of the Los Angeles Federal Building along with 14 other religious leaders on the 10th anniversary of the US invasion of Afghanistan, the longest war in US history. He and the other religious leaders spent the afternoon in jail. When asked about this experience, Anthony said: “I used to wonder why early Christians and early Quakers were so cheerful when they were taken to jail, or worse, for their beliefs. When I was taken to jail with my good friends, I had a taste of that joy that comes when we follow our conscience, no matter what.”

For the past few weeks, Anthony has been working with various religious leaders in the LA area to have a sharing circle and worship opportunities at Occupy LA. Anthony believes that the nonviolent approach of Dr. Martin Luther King is needed at this time in order to turn America from a culture of greed to a culture of compassion and mutual accountability.

It feels as if America, and the world, is going through a time of rebirth, a process that is painful and messy as well as beautiful. (Kind of like a marriage!) We are feeling the drama of birth in other ways, too. Jill had planned to work on the revised version of her book throughout 2011, but due our meeting and wedding, we are now facing the pressure of a January deadline. Jill is deeply grateful for Anthony's many hours of help in editing and for his appreciation of the value and great need for this book at this time of the foreclosure crisis. It feels as if giving birth to a book is our first child!

During this time of Advent, we are seeing the rebirth of the One who was born to show us how to live and love with grace. We hope and pray that all of you will experience once again this amazing grace and have a truly blessed holiday!


PS. The picture below shows us when we gave a presentation together about our respective books at Honolulu Meeting. We plan to speak together at One Voice, Jill’s church, on Sunday, Dec 18, about how the birth of Jesus challenged the existing social order. You’ll be able to access this talk at Anthony’s blog at laquaker.blogspot.com. 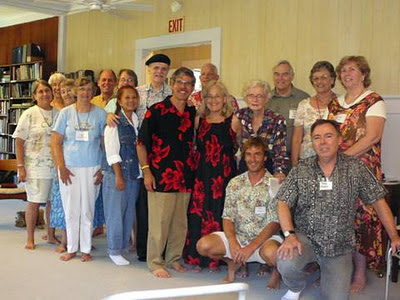