Seeing the Light through a Prism....Reflections on the Quaker Testimonies

I was intrigued that the June/July issue of Friends Journal contains four articles reflecting on and questioning the formulation of Quaker testimonies that Howard Brinton developed in the 1940s, which has come to be known as SPICE (Simplicity, Peace, Integrity, Community and Equality).
In his article "Categorically Not the Testimonies," Eric Moon points out that "testimonies are something Quakers do, not something we talk about." Yet like many Friends, including me, he spends a lot of time talking about the Testimonies! What he says is thoughtful and valuable, however, and I agree with him that "when we codify, make creed, and canonize a few words, we limit our vision, as well as the possibility of God's work through us." It is far better, Eric says, that we share our stories about our experiences, inward and outward, with Spirit than to focus on the Testimonies as if they were Quaker dogmas.
In "Reviving the Testimonies," Michael Levi also expresses concern that the Testimonies have been turned into a dogma or creed, setting up a "false authority" that gets in the way of revelation. He also recommends that Friends share stories about how Spirit is at work in our lives.
In "Reclaiming Our Divine Birthright," Patricia Barber shares her personal story about how she tried to put on Quakerism like a new dress, and how unsatisfying this approach was. She didn't really understand Quakerism until she had a direct and transforming experience of the Divine.
Jacob Stone, on the other hand, sees value in the Testimonies since they give us something to think about. In "On Authority, a New Apologia," he argues it is important that Quakerism become a "moral system that transcends theological divisions and encourages us all to define and live a universal morality." Jacob takes a humanist perspective and believes that Quakers should be able to analyze their beliefs logically and in the light of modern science and philosophy.
This discussion is extremely important. I think Howard Brinton would have been appalled (as I often am) that many Friends have come to see his formulation of the Testimonies almost as a creed or dogma, rather than as a way of explaining how God is at work within and among us. Brinton utterly rejected creedalism in all its forms. For him, true religion sprang from a direct experience of the Divine, not statements about the Divine. For Howard, as for early Friends, the Testimonies are not about what we believe, or even what we do, they are about what Spirit is doing through us. 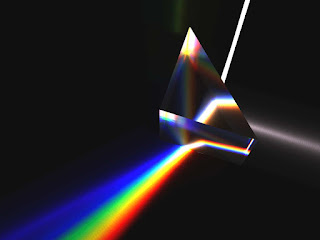 In Friends for 300 Years, Chapter 4, Brinton explained the origin of Social Concerns by using the image of Divine Light streaming down from above, entering a meeting, and scattering into four “testimonies,” almost like light refracted through a prism becoming a rainbow.


I love this fluid, dynamic image, especially after having seen a retrospective of the work of James Turrell, an artist who grew up in a Quaker family in Pasadena and uses light as a medium of art. As Turrell’s work discloses, physical light is mysterious energy, transforming everything, yet often taken for granted. The same is true of Divine Light. When the invisible, yet omnipresent Divine Light is refracted through the silent, centered worship of a meeting or an individual, it becomes visible through action.


One reason many Friends have lost touch with the Inward Light and rely instead on external Testimonies is that we have become too conventionally educated and “heady.” There is nothing wrong with relying on reason or on authority to some extent, according to Brinton, but they are not enough. We need the guidance of something greater and deeper than human means, something that Friends called the “Inward Light.”


I resonate with how Patricia Barber described the transforming power of the Inward Light in her life—the “divine birthright”—that enabled her to “live under the cross” and experience “abundant life.”


Her words reminded me of the traditional Christian meaning of testimony, i.e. “witnessing to the work of Jesus Christ within a person’s life” (Historical Dictionary of the Friends (Quaker), edited by Margery Post Abbott et al.) This meaning of testimony is one embraced by Evangelical Friends and is worth re-framing, as Michael Levi does, for liberal Friends.
How can I testify (i.e. provide evidence) that Spirit is at work in my life, in specific ways? How am I being stretched beyond my natural abilities and inclinations to love my neighbor, care for creation, reconcile conflicts, and promote justice?
If we ask this question honestly, as individuals and as a Meeting, and if we are willing to seek and submit to the guidance of the Inward Light, we may yet reclaim the spiritual power to which the lives of early Friends abundantly and radiantly testified.
Posted by LA Quaker at 10:15 AM