From War to Peace: A Guide to the Next Hundred Years 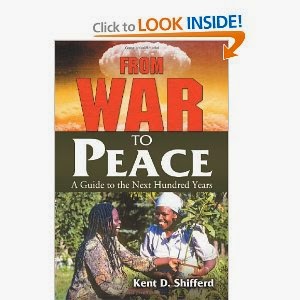 Suppose you went to a conference and found that scientists had discovered breakthrough cures for cancer, and were confident that in a hundred years or less, cancer would be a thing of the past. Wouldn't you want to share this good news with everyone? That's how I felt last week when I went to an  historic meeting of peace activists and scholars at Ben Lomond Quaker Center. Peace scholars like Kent Shifferd have shown us that there are evidence-based ways to resolve conflict without violence, and that war could be abolished in much the same way as slavery, if only we had the political will to do so.
It won't be easy, of course. There are huge profits to be made from war, and it will take a world-wide mass movement to take back governments from the war makers and plutocrats. But the same was true of slavery. We need to remember that people power has brought about social changes once thought impossible, such as giving women and blacks the right to vote, and ending the Cold War.
To learn more about how we could reduce and eventually eliminate the threat of war and create a peace system to replace our war system, I recommend going to the World Beyond War website at http://www.worldbeyondwar.org/. There you'll find a wealth of information and resources that can help you to become active in this effort to create a culture of peace and a peace system.

Ending war has been the goal and dream of God's people going back to the time of the prophets. "Everyone 'neath vine and fig tree will live in peace and unafraid," said the prophet Micah. "And into ploughshares beat their swords/ Nations shall learn war no more." Jesus rode into Jerusalem on a donkey to fulfill the prophesy of Zachariah that declared the Messiah would come to abolish war. Jesus made it clear that those who seek peace and justice are blessed, and those who live by the sword will perish.

Religious people need to take up the cause of ending war, just as a hundred and fifty years ago, many people of faith joined the abolitionist movement. We have grounds for hope, rooted in the bible, and also in research done by social scientists, that the culture of war can be changed into a culture of peace. As Kent Shifferd concludes in his important new book:

"The abolition of  slavery, an institution as old as war and as deeply entrenched, took about a hundred years to succeed.  This new story, the abolition of war, has a good chance to succeed in the next hundred years. At the very least, we can start to teach our children that war is not the only and inevitable story on the planet.  We have good reasons to believe that we may well be trending toward peace."

Summary of
From War to Peace: A Guide To the Next Hundred Years (Mcfarland Pubs, 2011)
By Kent Shifferd
(All material in this document may be used freely with attribution.)  This book is currently in use in college and university classes around the country.
While this book looks at war in an utterly realistic fashion, nonetheless the conclusion is a positive outlook for the probability that humanity will end the practice of war.
Introduction: “The Tragedy of War and the Expectation of Peace” introduces the great paradox, good people hate war but still support it.  Section I explains why.
Section I: War
War is not human nature but it is a cultural system deeply embedded in all the institutions of our society including government, but also religion, education, sports and the economy.  All give positive feedback to the belief that war is inevitable and to the mechanisms for prosecuting it.  It is a self-perpetuating and self-feeding system.  Positive rewards accrue to this behavior.  The cause of war is war itself, the mirror imaging of fear that drives each nation to arm and behave in bellicose fashion which confirms other nations of the need to do the same for self-defense in an ever upward spiraling of the technologies of violence.  Chapters in this section are:
1.    Describing and Analyzing War
2.    The Psychology of Killing
3.    The War System: Part I
4.    The War System: Part II
Section II: Peace
The war system is not the only system.  Since 1815 there is a revolutionary and growing trend toward crafting a peace system which I predict will result in the outlawing of war sometime in the next hundred years.  Chapters are:
5.     Defining Peace
6.    The History of Peace in Ancient and Medieval Times
7.    The History of Peace: 1800 To the Present
8.    The Successes of Nonviolent Struggle
9.    Abolishing War and Building a Comprehensive Peace System
10. The Wellsprings of Peace.
Below is a succinct summary of these trends from a separate document.
The Peace Revolution
by Kent D. Shifferd
The twentieth century was the most promising century for the eventual development of peace in the last eight thousand years.
We are living in the midst of a great revolution. True, the twentieth century was one of the most violent in human history and the twenty-first opened up with its share of wars.  It’s an old story but it’s no longer the only story.  Another is in the making although most educators, the media, and even presidents don’t know about it. Twenty-seven undeniably demonstrable trends have been are leading us toward the evolution of a system of global peace.  Below I have briefly summarized these inter-related trends.
Before the nineteenth century, great individuals espoused peace.  Jesus taught love of enemies, St. Francis reconciled quarrels in Tuscany, Erasmus wrote his “Complainte of Peace,” Kant his” Perpetual Peace”, but there was little if any organized activity.  Then, between 1815 and 1816, at least four peace societies were formed, three in the U.S. and one in England.   On 16 August, 1815, David Low Dodge founded the New York Peace Society to discourage war and promote peace. Over the next hundred years, organized peace movements came into being.
Beginning as a religious impulse peace thinking became a secular ideology arguing for a lawful international order and respect for the rights of peoples.  Citizens organized.  By the early twentieth century there were perhaps three hundred thousand European and North American peace activists from over a hundred peace societies that together formed a transnational movement and shared a common ideology then called “pacifism.”
2.    The progressive development of international institutions for adjudicating international conflict
This citizen based peace movement led to the 1899 conference at The Hague which resulted in the creation of the first form of the “world court,” now called the International Court of Justice. Regional courts developed in Europe and Latin America, and ad hoc tribunals arose to deal with war criminals, and most recently the International Criminal Court became a reality.  International courts are a crucial part of an interlocked peace system.
3.    The emergence of supra-national parliamentary institutions to keep the peace   World War I led the great powers to create the League of Nations and then to improve upon it with the United Nations in 1945.  While the UN remains imperfect, the goal of these organizations—to prevent war by negotiation, sanctions, and collective security is revolutionary in the long history of warfare.  The peace-building work of UN agencies is crucial to the evolution of a culture of peace.  Additionally, the European Union, the Organization of American States, and the African Union monitor regional disputes and engage in peace building activities.
4.    The rise of neutral, international peace-keeping  Neutral forces (the UN Blue Helmets) composed of several nations intervene to quell a conflict or keep it from re-igniting have been deployed in dozens of conflicts and are currently serving around the world.  And now another new development--non-violent, citizen-based peace keeping and peace building such as the Nonviolent Peaceforce and Peace Brigades International are a reality.
5.    The development of nonviolent struggle as a substitute for war, beginning with Gandhi, carried on by King, perfected in the successful struggles to overthrow the dictatorial regimes of Marcos in the Philippines, the Soviet Empire in Eastern Europe and the Communist coup in Russia and emergence of the Arab Spring.  We no longer need to resort to arms to defend ourselves.  It has been conclusively demonstrated that all power comes from below even in dictatorial regimes.  Nonviolence was even used successfully against the Nazis.
11. The end of political colonialism. Beginning in the 1960s, the old European colonial empires disappeared and dozens of peoples became self-governing.
19.  The rise of the human rights movement. Human rights are now an international norm and when they are not respected it is considered an outrage in most countries. Human Rights Watch and Amnesty International are often able to bring effective global pressure on dictatorial regimes to free political prisoners and respect human rights.

All this is new, unprecedented! How it will play out, no one knows.  The abolition of   slavery, an institution as old as war and as deeply entrenched, took about a hundred years to succeed.  This new story, the abolition of war, has a good chance to succeed in the next hundred years. At the very least, we can start to teach our children that war is not the only and inevitable story on the planet.  We have good reasons to believe that we may well be trending toward peace.

*****
Kent Shifferd is emeritus professor at Northland College and author of From War To Peace: A Guide To The Next Hundred Years (McFarland, 2011).  Contact kentshifferd@gmail.com