The Way of a Pilgrim: Reflection on my Greek Orthodox Roots and Quakerism 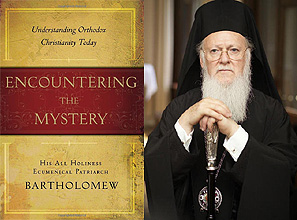 Ecumenical Patriarch of Constantinople, Bartholomew I. This humble, erudite and deeply compassionate man of God has become the symbol of unity for the Orthodox Christian churches throughout the world. He is well known for his commitment to protecting the environment, and for opening communications with other Christians (especially the Roman Catholic Church) as well as with Muslims and other religious groups.

I loved his book Encountering the Mystery: Understanding Orthodox Christianity Today,  which was published in 2008. (The Quakers published book with a similar title called Enlivened by the Mystery, which includes some Zen poetry I wrote.) Bartholomew’s work opened my heart and mind to the Orthodox tradition in many new ways. I was especially impressed by what he said about interfaith dialogue. I’m paraphrasing, but the gist of his message was: When we dialogue with others about the ineffable  mystery of God, we need to be utterly humble since what we know about the infinite is extremely limited. He also summed up Orthodox theology in a way that spoke to me as a Quaker. The whole purpose of theology, he said, is to bring us to such wonder at the awesomeness of God that we are silent.
I could talk at length about other experiences like going to Greece with Jill and partaking of Orthodox Easter, but Bartholomew’s call for silence seems like a good place for me to end this reflection on my Orthodox roots. I hope that during our spiritual practice time we can enter into a silence that brings us closer to each other and to the Infinite.

For our spiritual practice, I’d like us to use a variant on the Jesus prayer. This prayer is simply: “Lord, have mercy on me, a sinner.”


Whether are not we believe in God, or in the concept of being a sinner, we all recognize that we are fallible human beings in need of forgiveness and compassion. So let’s direct our minds and hearts towards the God of our understanding, the Inward Light, the Inward Christ,  the Buddha nature, or however we conceive our higher power.  Let’s breathe in mercy and compassion for ourselves, and breathe out mercy towards others. I suggest we use words like “Have mercy on me.” And “Let me have mercy towards others.” If we are comfortable with the word "God" or "Christ," let's use it. And let's began and end with silence.
Posted by LA Quaker at 3:33 PM