"Who would benefit from ADU’s? Yes in my back yard!" An op ed about the need for "Granny Flats"

Who would benefit from ADU’s?
By Jill Shook

units, aka “granny flats”) might benefit or hurt the city of Pasadena, I published an op ed in the Pasadena Star News providing evidence that ADUs would not significantly increase traffic, create parking problems, lower property values, increase crime, or have any other measurable negative impacts. See: http://www.sgvtribune.com/2017/07/13/granny-flats-dont-bring-the-problems-some-cities-fear-guest-commentary/

Statistics don’t tell the whole story, so I’d like to put a human face on this issue by giving some examples of people I know who live in or benefit from ADUs.

Pasadena has a sizable lower wage workforce to serve its higher income population (house keepers, gardeners, car washers, restaurant workers, those working in dry cleaners and even teachers). Some say that if you can’t afford to live in Pasadena you should move, but California’s Housing Element law requires cities to plan for sufficient housing for all income levels recognizing that a healthy city needs all income levels to make it work and help prevent long commutes. For these much needed workers to live close by, and to retain the character of the single family neighborhoods (rather than tearing down homes to build apartment buildings) ADUs allow for gentle infill nestled behind homes throughout city.

ADUs allow people to live in our city and enable low income homeowners and seniors on fixed incomes to keep their homes.  ADUs help families to live together and support each other. Recent studies show that the LA area is one of the most difficult regions in the country for a Millennial to get enough money for the down payment for a house. Living with parents or grandparents in an ADU can help young people save money to purchase their first home and gain entry into the middle class.
Currently many people in Pasadena live in unpermitted ADUs. Some of these ADUs are not up to code and have safety issues. And the city is not getting the property tax income on these units.  The city needs to adopt policies to facilitate an affordable path to legalization of such units and encourage building of new ADUs to strengthen the tax base. The example of other cities, like Santa Cruz, is worth following.
What could prevent a legal path to build and legalize unpermitted ADUs are Pasadena’s excessive lot size requirement (15,000 sq ft) and excessive fees that could add $50,000 to the cost of construction or renovation. $50,000 are only the fees, not including construction costs. Arcadia, Burbank, Glendale, Monrovia, and LA County (Altadena), all have no minimum lot size for detached ADUs. Temple City’s fees for ADUs are only $3,000. Glendale’s total fees are between $10,000-$20,000. Pasadena’s excessive fees do not seem in compliance with the new state law, (Assembly Bill 2299 • Senate Bill 1069, effective January 1, 2017.)
It is the intent of the Legislature that an accessory dwelling unit ordinance adopted by a local agency has the effect of providing for the creation of accessory dwelling units and that provisions in this ordinance relating to matters including unit size, parking, fees, and other requirements, are not so arbitrary, excessive, or burdensome so as to unreasonably restrict the ability of homeowners to create accessory dwelling units in zones in which they are authorized by local ordinance. http://leginfo.legislature.ca.gov/faces/codes_displaySection.xhtml?lawCode=GOV&sectionNum=65852.150

Portland saw a boom in second unit construction through fee waivers. See http://www.oregonlive.com/front-porch/index.ssf/2015/09/market_for_granny_flats_has_bo.html. Multnomah County is also launching a pilot program that provides homeowners with free tiny homes if they are rented to homeless people. This approach will actually save the city money since the cost of housing homeless people in apartments is higher than the cost of these tiny homes. See http://www.oregonlive.com/portland/index.ssf/2017/03/multnomah_county_wants_to_ince.html
Do second units make housing more affordable? Studies concludes that ADUs definitely help homeowners to live more affordably, and to truly help renters, it depends on costs like construction and fees. See   https://accessorydwellings.org/2014/08/07/do-adus-provide-affordable-housing/ 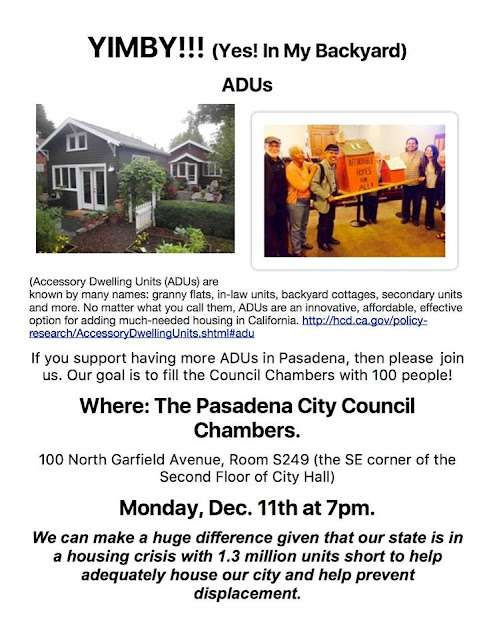 This Monday, Dec. 11th if the City Council votes to again make it possible to have detached ADUs on properties throughout the city with fees that are more reasonable, it will help move our city a bit closer to its housing vision:

All Pasadena residents have an equal right to live in decent, safe and affordable housing in a suitable living environment for the long-term well-being and stability of themselves, their families, their neighborhoods, and their community. The housing vision for Pasadena is to maintain a socially and economically diverse community of homeowners and renters who are afforded this right.
Posted by LA Quaker at 9:44 AM