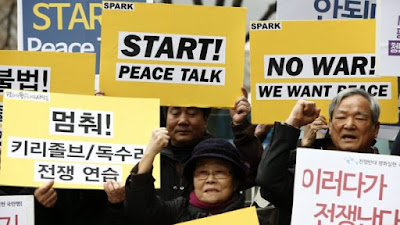 The Friends Committee on National Legislation (FCNL.org) has launched a nation-wide campaign to avert war with North Korea,  Interfaith Communities United for Justice and Peace (ICUJP.org)  is taking part in this effort to persuade our elected officials to pass these bills:

Federal - S 2047:A bill to bar the executive branch from using taxpayer money to launch a military strike against North Korea or introduce the Armed Forces into hostilities in North Korea unless Congress explicitly authorizes such actions or unless such actions are taken to rescue US personnel or repel a sudden attack on the United States or its allies.
Introduced October 31, 2017 by Sen Christopher Murphy (D-CT).

Federal - HR 4837: A bill to prohibit the introduction of the Armed Forces into hostilities in North Korea without a declaration of war or explicit statutory authorization, and for other purposes.
Introduced January 18, 2018

If you'd like to make a lobby visit to your elected officials, here's some information that you'll find helpful. Also please feel free to contact me if you're in the LA area. We have already planned visits to the offices of Senators Harris and Feinstein and Reps. Chu, Schiff and Gomez.

First, read Dr. Martin Hart-Landsberg’s article, which was recommended by Rev Hyun Hur and also material by FCNL staffers Anthony Weir, Abigail Stowe-Thursdon, and Erin Connolly. Dr. Martin Hart-Landsberg is Professor Emeritus of Economics at Lewis and Clark College, Portland, Oregon; Adjunct Researcher at the Institute for Social Sciences, Gyeongsang National University, South Korea; and a member of the Board of Directors of the Korea Policy Institute and the steering committee of the Alliance of Scholars Concerned About Korea.

then read these talking points carefully and decide which one(s) you’d like to present to your your elected official. Also think of a personal story explaining why you care about this issue.

Here is how FCNL recommends that we conduct Congressional office visits. First, we meet in advance to plan our visit and discuss our talking points. During our visit, we follow the following guidelines. We


Here are our talking points. We may not have time to cover all of them. We choose the ones that we feel we can present most effectively.

War Is Not the Answer. “A war in Korea today — without the use of nuclear weapons — would kill up to 300,000 people in the first few days of fighting, according to the Congressional Research Service. It would affect upwards of 25 million people on either side of the border, including at least 100,000 U.S. citizens. The full scale of destruction would be even larger, and nearly unthinkable, if nuclear weapons were used either by North Korea or the United States.
“And when it comes down to it, there is no military option that would solve the problems posed by North Korea.
“According to the Pentagon, securing all of the sites related to North Korea’s nuclear weapons program would require a full-scale ground invasion. This means thousands of American boots on the ground in another potentially long, bloody war of attrition on foreign soil. The consequences of a war on the Korean peninsula would range from humanitarian disaster to global economic instability to the collapse of our alliance structures.”-—Op Ed by Abigail Stowe-Thurston and Erin Connolly (FCNL Staff)
Nuclear scientists recently moved their Doomsday clock closer to midnight than it has been since 1953, largely because of tensions between North Korea and the US. The threat of war, either intentional or accidental, is very real

It’s the job of Congress to stand up to President Trump. “President Trump has the nuclear codes, but Congress alone may authorize war. Congress should pass legislation today reaffirming that the president may not start a war on the Korean Peninsula without explicit authorization from Congress. The Constitution demands it, and the American people deserve it. The Framers were not immature or short-sighted. They knew that war is dangerous, destructive, and corrosive. They wisely insisted that no one person should have the power to start a war. Their foresight is only more relevant today, when the cannon and the sail have given way to the thermonuclear warhead and the intercontinental ballistic missile.” Anthony Weir (FCNL)

Peace negotiations are possible and needed. Foreign policy expert Hart-Landsberg: “We don’t have to go down this road [to war]—we have another option—but it is one that the U.S. government is unwilling to consider, much less discuss. That option is for the U.S. to accept North Korean offers of direct negotiations between the two countries, with all issues on the table.”
North Korea is reaching out to South Korea to deescalate tensions, as evidenced by their recent efforts to engage in Olympic Game diplomacy (“Olympic games rather than war games”). This is not a time to threaten war, but to encourage negotiations. If Congress passes this bill, it will send a strong signal to North Korea that the US is serious about negotiations.

Dispelling myths about North Korea (based on an article by Dr. Martin Hart-Landsberg)

Most Americans don’t know much about Korea and what we think we know is mostly untrue. We need to educate ourselves. Time permitting, let’s dispel myths and share some of these important facts.
Hart-Landsberg writes: “U.S. government and media dismiss this option [of negotiations] as out of hand—we are told that (1) the North is a hermit kingdom and seeks only isolation, (2) the country is ruled by crazy people hell bent on war, and (3) the North Korean leadership cannot be trusted to follow through on its promises. But none of this is true.
North Korea is not a “hermit kingdom,” it is willing to negotiate: According to Hart-Landsberg, “If being a hermit kingdom means never wanting to negotiate, then North Korea is not a hermit kingdom. North Korea has been asking for direct talks with the United States since the early 1990s. The reason is simple: this is when the U.S.SR ended and Russia and the former Soviet bloc countries in central Europe moved to adopt capitalism. The North was dependent on trade with these countries and their reorientation left the North Korean economy isolated and in crisis.
“The North Korean leadership decided that they had to break out of this isolation and connect the North Korean economy to the global economy, and this required normalization of relations with the United States. Since then, they have repeatedly asked for unconditional direct talks with the U.S. in hopes of securing an end to the Korean War and a peace treaty as a first step towards their desired normalization of relations, but have been repeatedly rebuffed. The U.S. has always put preconditions on those talks, preconditions that always change whenever the North has taken steps to meet them.
“The North has also tried to join the IMF and World Bank, but the U.S. and Japan have blocked its membership. The North has also tried to set up free trade zones to attract foreign investment, but the U.S. and Japan have worked to block that investment.
So, it is not the North that is refusing to talk or broaden its engagement with the global economy; it is the U.S. that seeks to keep North Korea isolated.”
North Korea is not an outrageously militaristic country: According to Hart-Landsberg, “ N. Korea spends considerably less on it military than does South Korea: the media portray North Korea as pursuing an out of control militarism that is the main cause of the current dangerous situation. But it is important to recognize that South Korea has outspent North Korea on military spending every year since 1976. International agencies currently estimate that North Korean annual military spending is $4 billion while South Korean annual military spending is $40 billion. And then we have to add the U.S. military build-up. North Korea does spend a high percentage of its budget on the military, but that is because it has no reliable military ally and a weak economy. However, it has largely responded to South Korean and U.S. militarism and threats, not driven them. As for the development of a nuclear weapons program: it was the U.S. that brought nuclear weapons to the Korean peninsula. It did so in 1958 in violation of the Korean War armistice and threatened North Korea with nuclear attack years before the North even sought to develop nuclear weapons.”
North Korea has been a more reliable negotiating partner than the U.S.. Dr. Hart-Landsberg shows that it is usually the US, not North Korea, that has reneged on agreements. Furthermore, North Korea’s nuclear program is largely for defensive purposes, to protect the North and to bring the US to the negotiating table. “The North has tested a nuclear weapon 5 times: 2006, 2009, 2013, and twice in 2016. Critically, North Korean tests have largely been conducted in an effort to pull the U.S. into negotiations or fulfill past promises. And the country has made numerous offers to halt its testing and even freeze its nuclear weapons program, if only the U.S. would agree to talks.”
This is a good time to negotiate: Hart-Landsberg writes: “The outcome of the recent presidential election in South Korea might open possibilities to force a change in U.S. policy. Moon Jae-in, the winner, has repudiated the hard-line policies of his impeached predecessor Park Guen-Hye, and declared his commitment to re-engage with the North. The U.S. government was not happy about his victory, but it cannot easily ignore Moon’s call for a change in South Korean policy towards North Korea, especially since U.S. actions against the North are usually presented as necessary to protect South Korea. Thus, if Moon follows through on his promises, the U.S. may well be forced to moderate its own policy towards the North. What is clear is that we in the U.S. have a responsibility to become better educated about U.S. policy towards both Koreas, to support popular movements in South Korea that seek peaceful relations with North Korea and progress towards reunification, and to work for a U.S. policy that promotes the demilitarization and normalization of U.S.-North Korean relations.”
That’s why we need to support bills that reject war and make diplomacy our priority.