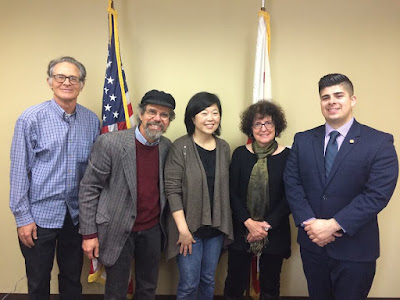 We began the meeting by introducing ourselves and thanking Roberto Gama for sitting down with us. Because Roberto had not met with us before, Anthony Manousos told him about FCNL and its role in advocacy.

We let Roberto know how pleased we were that Congressman Jimmy Gomez had voted against HR 71, the resolution that increased military spending at the expense of social programs. We also commended the congressman for his strong stand on environmental issues, voting against the Concealed Carry Reciprocity Act and co-sponsoring the Assault Weapons Ban

Our purpose in meeting with Roberto was to let Congressman Gomez know our concern about a possible war with North Korea. We asked that the congressman support HR 4837 that would prohibit the use of any kind of military force against North Korea without explicit authorization from Congress. We informed Roberto that this bill was sponsored by California Congressman Khanna and that 13 other California representatives are co-sponsors. We also let him know that Senator Diane Feinstein has signed onto the Senate version of the bill.

We asked Roberto to encourage Congressman Gomez to support the possible upcoming negotiations between Kim Jong-un and President Trump and to urge the administration not to set up any preconditions for these talks. We told Roberto that President Moon of South Korea has the backing of his people for these negotiations to take place and that Kim has stated that he will suspend nuclear test while talks are pending. He has also stated that he will let the military exercises being carried out by the United States and South Korea continue as planned.  We told Roberto that we felt that HR 4837 was more important than ever because if the talks do not produce results, the administration may feel its only alternative is a military strike.

Sue Park-Hur spoke of the work she and her husband have been doing through ReconcilAsian that has facilitated discussions between North Koreans and American Koreans. The current travel ban imposed by the United States has halted those important talks. She stated that these talks need to be continued and would like the congressman to support the end of the travel ban.
We invited Roberto to attend our upcoming event “Give Peace a Chance – How to Avert War with North Korea” that will be held on May 6th.