Open Letter to Fuller Seminary: "Finish well" in Pasadena, leave behind a legacy of affordable housing 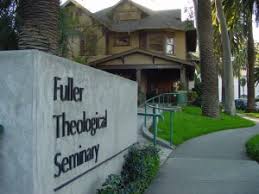 This letter is being sent to the Board of Trustees of Fuller requesting that they leave behind a legacy of affordable housing to Pasadena, a city that has been its home for 70 years. The Greater Pasadena Affordable Housing Group (GPAHG) believes this is a reasonable request because Fuller made an agreement with city to designate 179 units to be permanently affordable. They must be sold with that condition. GPAHG is asking the Board to comply with this agreement by selling part of its property to an affordable housing developer at a reduced rate. This letter provides the moral and theological as well as policy reasons for this request.
Oct. 23, 2019
Dear Fuller Seminary Board of Trustees and Senior Administration,
As Fuller Theological Seminary is preparing to leave Pasadena and build a new campus better-suited to preparing Christian ministers and leaders for the next century, there has been discussion, both within Fuller and the local community, about what legacy you will leave here, that you will “finish well.” What better legacy could there be than a project that would minister to the most vulnerable among us, a project that would remain in the city that has been home to Fuller for the past 70 years?

GPAHG is a community group that is faith-based and deeply invested in advocating for the poor. Our vision is that all Pasadena residents shall have safe, quality, accessible, and affordable housing; people are not displaced from the community; and our community is racially, ethnically and socially diverse. Our group consists of members throughout the Greater Pasadena area, including business owners, city planners, seminary students, pastors, teachers, and the homeless—all coming together to address one of the greatest crises in Southern California—homelessness, and a lack of affordable housing.
Before we delineate our reasons for this request, we call to remembrance the distinct role and history of Fuller Seminary. We understand that Fuller’s vision is to “form global leaders for kingdom vocations.”[1] Fuller’s Mission Beyond the Mission names as a key purpose: “to work for…the good of human society at home and around the globe.”[2] Considering Fuller’s legacy and purpose, the question at hand is whether Fuller Seminary will conduct the sale of its property by embodying its core values to be faithful, courageous, collaborative, innovative and fruitful leaders that serve “the least of these?” (Matthew 25:40)[3]
Over the past few years, GPAHG and students of Fuller Seminary have advocated tirelessly for Fuller Seminary to reflect its decision to sell 197 housing units affordable for students, to Carmel Properties. This resulted in zero affordable housing for the community and a displacement of many of Fuller’s students who were no longer able to live there. We write this letter out of deep concern that Fuller Seminary be true to its commitment to affordable housing, as stated in the Fuller Master Plan.
There are a number of reasons for this request. First, it is important that Fuller finish well and leave a legacy for the city (as well as for those of us who have attended Fuller) that we can be proud of, namely, a much needed affordable housing development. There are also deeply theological and spiritual principles at play here.
On a personal note, as the Chair of GPAHG and the Director of Making Housing and Community Happen, and as an Evangelical Christian with a Doctor of Ministry, who has studied at Fuller and has been invited to guest lecture in many classes, I feel a deep love and sense of connection with Fuller Seminary. I therefore feel led to share with you this biblical perspective.

At the end of this letter there’s a list of scriptures that indicate how those who demonstrate a commitment to love the poor by addressing the root causes of poverty will be blessed abundantly. It is my prayer that Fuller be blessed abundantly in its new location. In His wisdom God has bound up the way we love the poor as a way to show our love of God, and receive His blessings.  It can be tempting to move forward and “leave the past behind,” but the key theme of Deuteronomy is “remember” for a good reason—we have been given the Bible in part so we might remember the past to inform our future. We must not forget the pain and unintended consequences of hasty decisions lacking transparency and learn from them, so they won’t be repeated.

From Genesis to Revelation the Bible makes it clear God’s priority is to bring the most vulnerable and those on the margins into the center of his care. The poor, the widow and those on the margins of society are the focus of every message directed to pharaoh and the kings, from Moses to Esther. Additionally, Jesus lifted up the poor and disenfranchised in each story and parable. He brings them front and center and so should we.  Jesus died for our sins but he also died because he was proclaiming a kingdom of love, mercy and justice, which was contrary to the greed of the leaders of his day.
When God gave us all we need to sustain us in Genesis 1, he never gave us the land. God made it clear that “the land was mine, thus says the Lord.” We are to steward the land according to God’s principles.

The first five books of the Old Testament prepared a people to go into the Promised Land with detailed laws on how to govern in such a way that land would be distributed to every tribe and person to have a place to call home—to live together in peace and security—in a way that would be a light to the nations. Israel lost their land because they didn’t obey God’s laws. The book of Lamentations is all about grieving the loss of land. Many of us have been grieving the devastating loss of Fuller in Pasadena.

God sent prophets to hold kings accountable to make sure such laws and principles were upheld. But as we all know, prophets were killed and stubborn Israel refused to honor God‘s laws. At the time of Jesus, the Pharisees and Sadducees, in collusion with Roman rule, had gobbled up most of the land, leaving the peasants landless. Jubilee land distribution and other anti-poverty laws throughout Leviticus and Deuteronomy had not been upheld. In Luke 4 Jesus came preaching good news for the poor and inaugurating his ministry by proclaiming jubilee—a type of land redistribution. The Early Church lived this message (Acts 4) by sharing all things in common. Many churches across the US are providing affordable housing as a way to emulate the Early Church.

Fuller wisely set aside student housing at 10 to 20% below the market. This commitment within the Fuller Master Plan is something to be admired as a wise steward caring for the students and employees.

Fuller is not alone in its struggle as churches are re-envisioning what it means to be the church, and pastors are not attending seminaries as they once did. A number of seminaries are trying to figure out the best use of their land. Taking the lead by providing a site for affordable housing would be an example to other seminaries and churches seeking to address the housing crisis, one of the major social issues today in the US.  It is important that Fuller not only care for its students, but also demonstrate a love for “neighbor as yourself” as commanded by Scripture.

As a faith-rooted organization, we at GPAHG feel that it is not at all unreasonable to request that at least one parcel, large enough to do a sizable affordable housing project, be sold to an affordable housing developer. We are not indicating what we feel would be a reasonable number of units, but wish you to keep in mind that 197 units affordable to students were lost to our city. This impacted the city by causing students to compete with long-time residents for the few affordable units that exist.

Additionally, we understand that the 179 affordable inclusionary units at Chang Commons are required to be kept affordable in perpetuity. Pasadena’s policies make this clear. Yet we understand that Fuller is seeking to get out of this commitment and sell only some of these units as affordable, ignoring the city’s policies.  Since Fuller has embraced addressing homelessness in its course offerings and praxis, partnering with Urban Initiatives to assure that each homeless person is counted, we recommend that these units be sold to an organization like Door of Hope, a Christ-centered ministry seeking to help formerly homeless families stay in Pasadena, so they will continue to be nurtured by this excellent ministry located just a few blocks from Fuller. There are a number of highly respected affordable housing developers that could also partner with Door of Hope as a way to keep the 179 units permanently affordable.

Leaving behind a legacy of affordable housing would indicate Fuller’s love for the city of Pasadena, as Jesus loved Jerusalem and other cities. By showing concern for those that Jesus cared deeply about, Fuller will have indeed finished well in the city of Pasadena.
With over half of the seminary students embarking upon ministry outside of church walls, Fuller Seminary is being watched and held accountable by a host of community members to see if it will conduct business in a manner that is a faithful witness to not only teach and disciple others for kingdom work but to demonstrate by example how to do so while caring for the poor.[4]

Oh, the joys of those who are kind to the poor!
The Lord rescues them when they are in trouble.
The Lord protects them
and keeps them alive.
He gives them prosperity in the land. Psalm 41:102

He gives generously to the poor;
his righteousness endures forever;
his horn is exalted in honor. Psalm 112:9 (ISV)

Those who give freely gain even more;
others hold back what they owe, becoming even poorer. Proverbs 11:24 (ISV)

Whoever is kind to the poor is lending to the Lord—
the benefit of his gift will return to him in abundance. Proverbs 19:17 (ISV)

Whoever refuses to hear the cry of the poor
will also cry himself, but he won’t be answered. Proverbs 21:13 (ISV)

When a king faithfully administers justice to the poor,
his throne will be established forever. Proverbs 29:14 (ISV)

In Isaiah 58 God’s Reward is clear for those who shelter the homeless and loose the bonds of injustice:

“Then your light will break forth like the dawn, and your healing will spring up quickly; and your vindication will go before you, and the glory of the Lord will guard your back.


This is our prayer and hope for Fuller as it seeks the Lord in how to finish well in the city of Pasadena.