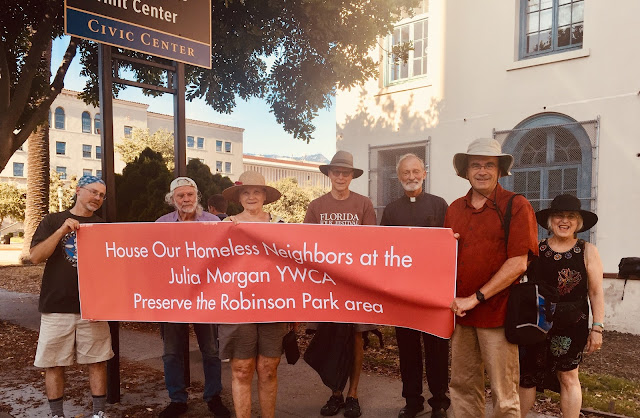 Our August 26 weekly vigil was small, but mighty. A dozen people showed up in front of the Julia Morgan Y, including several who were experiencing homelessness.

Those taking part in our vigil included Jill Shook (my wife and director of MHCH), Bert Newton (Mennonite pastor who was recently hired by MHCH), Jeff Utter (a UCC pastor), Peter Hartgens (a Quaker activist), Jochen Strack (a nurse practitioner who practices street medicine with people experiencing homelessness), Charles Jacob (a Unitarian), and Kathe Poole (a member of All Saints), and Natasha (a young African American woman who does environmental work).

After our vigil, we went to City Council where Jeff and Jochen spoke powerfully about the need for homeless housing. Jeff spoke about the divine mandate to care for the most vulnerable, and Jochen spoke out of his experience as a nurse practitioner caring for those who are living on the street.

In addition to advocating for homeless housing, I spoke about the Quaker peace and justice activist Bayard Rustin. He was an extremely important civil rights leader--mentor of Dr. King and organizer of the March on Washington--who has not received the recognition he deserves because he was gay. 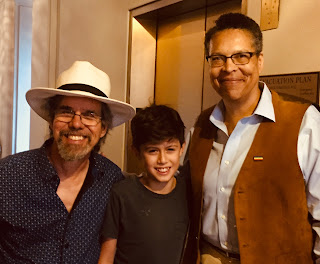 about a campaign to honor Rustin with a commemorative stamp, our Meeting strongly supported this campaign. So I joined with Lauren and a young student named Henry from Friends Western School to urge the Pasadena City Council to pass a resolution in support of a Bayard Rustin stamp. Council member John Kennedy seemed interested and told me to seek the support of the local NAACP chapter, which I intend to do.

This is what I said to the City Council during my 3-minute public comment:


I want to thank the City Council for last week’s decision to raise the inclusionary set aside to 20%. I also want to thank Margaret McAustin for asking the Planning Department to determine whether it’s feasible to raise the set aside to 25% and incentivize family units. I also appreciate her interest in CLTs as a way to preserve affordable housing. Finally, I want to encourage the Council to take seriously her proposal to eliminate the nearly $20,000 residential impact fee for ADUs and charge only $950 as you do for affordable housing. These are positive steps towards addressing our city’s housing crisis. As you know, the need for homeless and affordable housing is urgent and I am part of a city-wide coalition of groups advocating for more homeless housing, including at the Julia Morgan Y.       Today I am here on behalf of Orange Grove Quaker Meeting to urge the Council to pass a resolution in support of a Commemorative Stamp honoring Bayard Rustin, a Quaker Civil Rights leader. The California Legislature recently passed a joint resolution in support of the national Bayard Rustin Stamp campaign. Resolution ACR-27 “honors the legacy of Bayard Rustin, who stood at the confluence of the greatest struggles for civil, legal, and human rights by African Americans, as well as the LGBTQ community, and whose focus on civil and economic rights and belief in peace and the dignity of all people remains as relevant today as ever.”       I feel it would be very appropriate for our City to pass a similar resolution since Rustin came to our City in 1953 to speak at the Pasadena Athletic Club on behalf of peace and civil rights. Sad to say, Rustin was arrested in Pasadena for engaging in a homosexual act and served two months in prison but this didn’t deter him from his commitment to civil rights and justice.Rustin went on to become the mentor of Dr. King and helped to organize the March on Washington. During the final year of Dr. King’s life, Rustin and King launched the Poor People’s campaign. Among other things, this campaign advocated for fair, non-discriminatory and affordable housing.  Their efforts led to the Fair Housing Act of 1968, which ended racial covenants in Pasadena.We owe Bayard Rustin a great debt of gratitude for his tireless work on behalf of justice and civil rights. I hope you will pass a resolution in favor of  a Commemorative Stamp honoring his legacy.