A Palm Sunday drama for kids: a peace and justice perspective on the Gospels

For the past six months I have been teaching a faith development and Bible class for middle schoolers at the Peace and Justice Academy here in Pasadena. (See http://www.thepeaceacademy.org/ms/)  I've used a variety of teaching techniques--powerpoints, videos, art activities, field trips, etc. to engage students and show the connection between the Bible and social justice and peace. The kids also take part in events like the Palm Sunday Peace Parade, which give them a sense that the Bible message is not confined to the church but can be lived out in the streets and in the community. (see http://laquaker.blogspot.com/2012/03/palm-sunday-peace-paradea-life-changing.html


This week I was inspired to write some skits for the kids to perform. Please feel free to use these skits in your Sunday or First Day School.

Actors: Two of Jesus’ disciples, Peter and John, are waiting for Jesus, standing slightly apart from the crowd (4 people).
John: “Is he here yet?”
Peter: “No, he’s probably off somewhere healing someone who’s sick. You know how he is.”
John: “It’s getting late. The crowds are restless.”
Peter: “Look! Isn’t that Jesus? What is it he’s riding on?”
John: “Looks like a donkey to me.”
Peter (rolling his eyes): “A donkey? That’s impressive.”
As Jesus arrives on a donkey, someone in the crowd begins to shout: “Jesus is coming to save us. He’ll cure the sick. Bring the dead back to life. Drive out the Romans!”
The crowd begins to shout: “Hosannah in the highest. Hail, our king Jesus.!”
Peter: “Wow! The crowds are going wild, throwing down their cloaks like he’s their king. Let’s shout with them.”
Crowd follows Jesus around, shouting. Peter and John shout the loudest of all.
A Pharisee steps aside and watches with disapproval. When the procession stops, he says to Jesus.
“You better keep your followers under control or you’ll get into trouble.”
Jesus replies calmly: “If they keep quiet, these very stones would start shouting.”
The Pharisees shakes his head, disgusted.
Jesus then points to the city and says:
“Jerusalem, it’s too bad that today your people don’t know what will bring them peace! Now it is hidden from them. Jerusalem, the time will come when your enemies will build walls around you and attack you. Armies will surround you and close in on you from every side. They will level you to the ground and kill your people. Not one stone in your buildings will be left on top of another.”
The Pharisee walks away, muttering: “This guy is bad news. If he talks like this, he won’t last long.”

Unsung heroes of Torrance: how a homeless woman in a wheelchair went to city hall and obtained justice, with the help of religious leaders

Torrance, California, has has become famous thanks to the Angelina Jolie's movie "Unbroken," the true story of Louis "Louie" Zamperini, a man who overcame huge hurdles and became an Olympic athlete, a war hero, and finally a powerful Christian who toured the country sharing the Gospel (a fact glossed over by the movie). I'd like to share the story of unsung heroes of Torrance, Melissa Bayless, and members of the religious community willing to take a stand for justice. 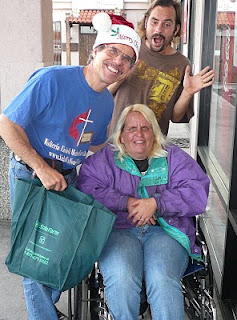 Born and raised in Torrance, Melissa also had to overcome huge hurdles. She had the misfortune to be born with endofibromitosis a congenital disease that causes tumors to form and has left her legally blind and in a wheel chair in her 30s. She had abusive parents who kicked her out of the house and left her in foster care when she was a child. Melissa ended up marrying an abusive man and had a daughter by him whom she dearly loves but couldn't live with because of her poverty and health issues. Despite her abysmally bad luck, Melissa is upbeat. She doesn't drink, smoke or do drugs. She is a devout Christian. And some have nicknamed her "Little Miss Sunshine." Like the poor widow that Jesus praised (Luke 21:1-4), she loves to help people, even though she has little of her own to share. She is sometimes asked to share her story at churches, where she often compares her fate to that of Job.


"Job lost everything--his family, his wealth, his health," says Melissa, "and people said, 'What did you do wrong to deserve this?'"

Her SSI check is only $900 per month. To pay for lodging in a "cheap" motel, she must spend her life panhandling to afford food, rent and other necessities. She gets by thanks to the kindness of strangers, and "donors" like myself, who contribute regularly to keep her off the street.

Six years ago, she was overjoyed when she got on the list to receive a Section 8 voucher, which pays for 2/3 of rent, and would make it possible to live without begging.  She waited patiently and finally received her voucher last October. However, there's a catch. She was given only a month to find a place. She immediately set to work, aide by her boyfriend (who pushes her around in her wheel chair, their only mode of transportation) and several religious leaders whom I contacted: Jee Kim, the wife of a Korean pastor, and Roy Currence, a retired engineer who is one of the lay leaders of Walteria United Methodist Church, where my wife Kathleen of blessed memory used to be a pastor. We formed a team that has worked tirelessly for the last four months trying to find a place, and get extensions for Melissa.

There is a deplorable dearth of affordable housing in Torrance, but persistence finally paid off. After hundreds of phone calls and numerous site visits, Roy found a large apartment complex with over a dozen Section 8 units that are handicapped accessible. Unfortunately, none are available at this time. Roy befriended the property manager, explained Melissa's story, and gained his sympathy. The property manager agreed to place Melissa at the top of the list next time there is an opening.

We brought this good news to the attention of a Section 8 officer but he refused to grant another extension. He wanted a definite commitment and a move in date. Melissa's voucher was due to run out on March 3 and we became desperate. Losing a voucher meant having to wait another six years or more, probably with same outcome.

I urged our group to go to the City Council, but Jee had a better idea. She made an appointment to see Mayor Patrick Furey on Monday. We conferred by emailed and decided to get signatures on a petition from church members. Over 100 signatures were gathered. Roy also got a letter from Melissa's doctor explaining her disability, and a letter from the property manager assuring that he wanted to rent to Melissa. Armed with these documents, and fortified with prayer, the group went to City Hall accompanied by Melissa and Shaun.

Mayor Furey turned out to be a nice guy and very sympathetic. He was just elected mayor after recently retiring from the County of Los Angeles as a Principal Deputy County Counsel assigned to the Children's Services Division. He showed genuine interest in Melissa and her story. He seemed surprised to learn how difficult it was to get affordable, accessible housing in his city.

At one point, he said there was nothing he could do as mayor since Section 8 is a federal program.

Roy was not going to let the mayor off the hook that easily, however. In his quiet way, Roy is a bull dog.

"Mayor, you have the power of your office," Roy said in his low key, but authoritative voice. "You can go to the Section 8 office and let them know how you feel."

The Mayor was moved to take action, went to the Section 8 office, and returned ten minutes later with Section 8 officer who was sympathetic to Melissa's case. After reviewing the documents, she decided that the assurance from the property manager was sufficient justification for granting Melissa an extension until a unit opens up, whether in one month or more.

Melissa and her supporters were jubilant. This means that Melissa will almost certainly obtain affordable housing!

Meanwhile, she is living in an overpriced, "cheap" motel, paying $1100 per month for a room with a microwave oven and a small refrigerator.

I thank God for religious folk who have taken their Bible seriously and are standing up for the poor, as God commands. And I thank God for a mayor willing to show some heart and do the right thing.

Roy told me that Mayor is thinking of starting a commission to address homeless issues in Torrance and wondered if Roy might like to join it.

I felt a surge of joy that brought tears to my eyes. Clearly, God is at work in Torrance, and isn't finished with this city yet.

(For more about Melissa, see also http://laquaker.blogspot.com/2009/09/post-traumatic-growth-syndrome.html or just type "Melissa" in the search box. There are plenty of stories about her on my blog!)
Posted by LA Quaker at 8:42 AM 1 comment: