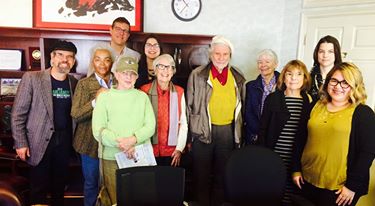 Our first San Gabriel Valley FCNL Advocacy Team visit was to the office of Representative Judy Chu, a Progressive Democrat. Around 11 people showed up, twice  as many as expected. We gathered at  Peet's to prepare  for our visit  and to get  to know each  other better. We  each shared about  why we had  decided  to become  active in this cause.

We then  went to Judy  Chu's  office in Pasadena, a place I've visited many times before in the past four years. After introducing  ourselves to  Judy Chu's  aides, Elizabeth  Andalon and Anna Iskikian, I  told them that people in her district care deeply about immigrants,  as evidenced by  how many showed up at her  office.   We want her  to continue  to  stay strong in supporting  the Bridge Act  and  opposing  funding Trump's wall and other  anti-immigrant legislation.

We thanked  her  for her efforts on behalf  of  immigrants,  as  well  as women and workers. We also asked  about the prospects for immigration legislation  in  DC.

Her  aides  said  that things are very  uncertain now  in DC. The Dems  have  very  little power.   Trump is very unpredictable but seems to  be worse  than  expected. They appreciated our coming to be  supportive.

Response: They  encouraged us  to get in  touch with friends  and family in  red  states  and districts and  encourage  them  to support the Bridge  Act and other  legislation protecting immigrant  rights.

Michelle  also  asked  about the  ramifications  of defunding California, but the aides didn't  have  an answer.

Juliana Serrano, coordinator of the peace and justice program for All Saints Episcopal Church, asked  about  the "Reforming  American  Immigration   for  Strong Empowerment  Act" (RAISE) that would limit the number of family-based visas so that only spouses and unmarried minor children of citizens and permanent residents can get green cards? (this will also rank immigrants by class and accept more highly educated immigrants over the "lower skilled" workers.) Are there plans to introduce a House bill like this Senate bill? Will she oppose it? For more information, read this: http://www.cnn.com/2017/02/07/politics/cotton-perdue-immigration-bill/index.html

Elke  , a psychologist, shared  articles  showing  that  the crime rate  among refugees  and immigrants is  lower  than among  the general  population,  both in the USA and in Germany, which accepted  a million Middle Eastern  refugees.

The aides told us that once the situation becomes  more  clear  in DC, Judy Chu plans to do an "immigration clinic."  We encouraged  her  to  do one at  the  Reformation Lutheran Church on Orange  Grove Blvd  because  this is in the middle of  a largely Latino neighborhood, and  this church has  an  Hispanic congregation. The Quaker  Meeting  nex door also hosts  an Hispanic  congregation. The  aides were  open to making  that suggestion to Rep Chu.

They told us that  they  sometimes help  immigrants  who  have problems with their  status. They refer  them  to  lawyers who provide  pro  bono  or  low  cost counseling.

I  shared  that Quakers  are  looking  into having  events  for our Latino  neighbors  focusing on  "Know  Your Rights as an Immigrant,"  "Dealing  with  the  Stresses of  Having Undocumented Family Members"  and "What  Legislation Do We  Need  to Support  or  Oppose  at  the Federal and State Level?" We hope  that Rep Chu  would be  part of this community  forum.