"Moving from a War Economy to a Peace Economy": an ICUJP presentation this Friday at 7:30 am by Jodie Evans, Co-founder, CODEPINK

Where Do Trump and Biden Stand on Affordable Housing? 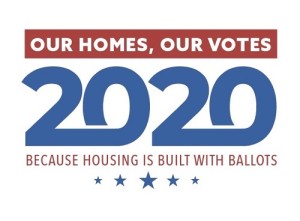 We at MHCH are convinced that because the outcome of this election will significantly impact our nation’s housing crisis, we need know where candidates stand on affordable housing. While MHCH is nonpartisan and doesn’t endorse a candidate, we believe that voters need to know the facts and decide for themselves who is best qualified and able to address our nation’s housing and homelessness crisis.

President Trump has cut HUD funding each year and intends to cut it even more in 2021, if reelected. President Trump’s and HUD secretary Ben Carson’s Fiscal Year (FY) 2021 budget request proposes to drastically cut housing benefits that help millions of low-income seniors, people with disabilities, families with children, and other individuals afford their homes. Overall, the administration proposes to cut HUD by an astounding $8.6 billion or 15% below 2020 enacted levels, not including those cuts offset by increased FHA receipts. See https://nlihc.org/resource/analysis-president-trumps-fy-2021-budget-request

Trump appointed Ben Carson to head HUD, a surgeon with no experience in housing policy who is not only unqualified for this position, he is also philosophically opposed to affordable housing and other government programs intended to help reduce poverty.   Carson has tried to eliminate a number of HUD programs in their entirety, including Community Development Block Grants (CDBG), the Public Housing Capital Fund, HOME Grants, housing vouchers for veterans, housing block grants for Native Americans, and the Choice Neighborhoods Initiative, among others. Programs that weren’t cut entirely were slated for massive cuts, including chronically underfunded housing vouchers and the Public Housing Operating Fund. These programs are designed to either build, maintain, or revitalize affordable housing for low-income families. Fortunately for those families, Congress rejected all four of these budget proposals.https://www.curbed.com/2020/8/17/21372168/ben-carson-hud-housing-trump

With much fanfare, Trump rolled back the Affirmatively Furthering Fair Housing rule, falsely claiming that affordable housing leads to crime and deterioration of property values. The Obama-era update to a decades-old federal requirement aimed to eliminate discrimination and combat segregation in housing. https://www.cnn.com/2020/08/03/politics/fact-check-trump-low-income-housing-suburbs-crime/index.html

(The opinions expressed here are those of Shelterforce,  not necessarily MHCH.)

Joe Biden has proposed an ambitious housing platform to spend upward of $640 billion to increase federal funding for the construction and maintenance of public housing, and access to Housing Choice Vouchers and other rental assistance. His plan would also expand the Low Income Housing Tax Credit program, bolster the Fair Housing Act, and more.

If Biden wins and is able to implement his housing goals, it would mark a significant shift in how America tackles housing affordability. But with Democrats fairly unlikely to flip the Senate and Senate Republicans even less likely to sign on to sweeping affordable housing reforms, Biden would face a steep uphill battle for any idea that required Congressional approval.

So what could a future Democratic president accomplish on affordable housing if they can’t get their bills passed? Perhaps not enough to create paradigm shifts. But according to housing advocates and policy experts, the executive branch has a lot of leeway within administrative rulemaking to increase access to housing, protect vulnerable communities from discrimination, and potentially even increase housing supply.

Biden wants to bolster the Housing Trust Fund by $20 billion to construct low-income housing, make Housing Choice Vouchers an entitlement (meaning they would reach everyone who is eligible, instead of the current 1 in 4), allocate $5 billion a year for a renters’ tax credit, expand LIHTC and Community Development Block Grants by $10 billion each, invest $13 billion to address homelessness, and more.

That is sure to be a hard sell to a Republican-controlled Senate. But there are elements of his plans that can be done administratively.

Biden wants to reimplement AFFH and other elements of the Obama administration’s fair housing rules that Trump is rolling back. He also wants to establish a rule that HUD can only contract with housing providers willing to house formerly incarcerated individuals, part of his pledge to end homelessness for people who leave prison.

None of those administrative actions would drastically increase affordable housing supply, of course. But they are signals that Democrats are taking affordable housing seriously and advocates and experts are hopeful about what that could mean in years to come.

How would Trump or Biden approach housing and homelessness?

Even before the coronavirus crisis hit, cities across the nation were confronting a historic surge in homelessness as hundreds of thousands of Americans found themselves unable to afford rising rents.

Now, some of the millions who lost their jobs as businesses shut down to slow the contagion are in danger of eviction or foreclosure. Regardless of whether Congress and President Trump agree on a new relief package, the housing crisis is sure to remain severe in the months ahead.

In the primaries, former Vice President Joe Biden and his Democratic rivals released sweeping and costly housing proposals reflecting heightened voter concern about higher rents and the spread of homelessness, especially on the West Coast.

Trump has taken no major steps to relieve homelessness or expand the supply of low-cost housing. But a White House spokesman said the president deserved credit for revitalizing urban communities in part by “building the most inclusive economy in American history.”

Trump’s signature housing initiative has been the repeal of a rule requiring communities to build low-cost units in neighborhoods where it can relieve racial segregation in housing. The rule, “Affirmatively Furthering Fair Housing,” was issued under President Obama to enforce the Fair Housing Act, one of the landmark civil rights laws of the 1960s.

“I am happy to inform all of the people living their Suburban Lifestyle Dream that you will no longer be bothered or financially hurt by having low income housing built in your neighborhood,” Trump tweeted in July. “Your housing prices will go up based on the market, and crime will go down.”

The Trump administration threatened last year to “crack down” on homelessness in California by tearing down encampments and sheltering the homeless in government facilities. Nothing came of it.

Trump’s 2017 tax cut included incentives to encourage developers to build projects in low-income neighborhoods known as “opportunity zones.” The projects have included luxury housing. Among the applicants for the tax breaks are well-connected developers and investors such as former White House aide Anthony Scaramucci and the family of Trump son-in-law Jared Kushner.

Trump’s campaign website includes no proposals on housing or homelessness that he would pursue during a second term, only a section on “promises kept.”

Biden has promised to reinstate the fair housing rule scrapped by Trump.

He has also pledged a sharp increase in Section 8 rent subsidies to ensure they’re available to all Americans whose income is low enough to qualify. He would allocate $5 billion for a tax credit to ensure that no family that is eligible for the subsidies would have to spend more than 30% of the household’s income on rent.

Biden would establish a $100-billion affordable housing fund to finance the upgrading of housing for low-income Americans. He vowed to put $10 billion into tax incentives that encourage developers to build affordable housing in communities that need it the most.

Biden would also condition federal grants to localities on the elimination of zoning restrictions that limit development near public-transit centers or encourage suburban sprawl.

Biden has pledged $13 billion in spending to combat homelessness. His criminal justice proposals include a goal of ensuring housing for all formerly incarcerated individuals upon release from prison. https://www.latimes.com/politics/story/2020-08-17/trump-biden-housing-homelessness-policy

You’re invited to our MHCH Monthly Housing Justice                 Educational Forum. Learn about the environmental dangers posed by the ill—conceived Spacebank housing development in East Pasadena, and how and why affordable housing is often the most environmentally friendly housing ever built.

Register in advance for this meeting:

After registering, you will receive a confirmation email containing information about joining the meeting.

Kristin Shrader-Frechette is O’Neill Family Professor, Department of Biological Sciences and Department of Philosophy, at the University of Notre Dame. She has previously held senior professorships at the University of California and the University of Florida. She has been personally affected by environmental pollution: her  mother died of an environmentally-induced cancer at the age of 43, leaving seven children motherless in Kentucky. Not only does she know her science–with degrees in mathematics and philosophy as well as post-doctoral work in biology, hydroecology, and economics–she is also well versed in Catholic social teaching. Here in Pasadena she has taken up the cause of making sure that any housing built at the Spacebank, a site contaminated with toxic waste from military testing, is safe for children and families.

Created with NationBuilder, software for leaders.