"Fierce Love": Quakers gather virtually in Washington, DC, to advocate for an end to police brutality 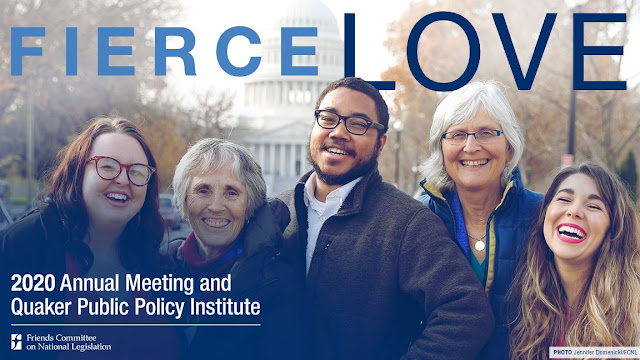 [This is a message I shared at Orange Grove Meeting during adult study on November 15, 2020.]

It’s a great joy to share with you FCNL’s response to the current election and also what’s happening during FCNL’s annual gathering which is taking place as we speak. Right now over 500 Friends and supporters of FCNL from around the nation are meeting virtually to advocate for our Quaker values in Washington, DC. Despite, or maybe cause of Covid, more people have participated in FCNL’s annual fall gathering as well as in FCNL’s spring lobby day than ever before.

The mood at this year’s FCNL gathering is very different from four years ago. I vividly remember flying into DC and arriving at the airport just as the election results were being confirmed. The news was so daunting and disheartening that I saw grown Quaker men weeping during Meeting for worship, and I was one of them. We were devastated but we also felt blessed. We weren’t grieving alone. We had each other. We worshipped together, we share our fears and hopes, and we committed ourselves more passionately than ever to social justice and to being the change we want to see in the world. I came back to Pasadena eager to start an advocacy team and our team took off and grew and linked up with Interfaith Communities United Justice for Peace. We advocated for peace in North Korea and Iran, and for sunsetting the Authorization for the Use of Military Force. And we are still going strong.

The mood that Quakers are feeling today is one of relief and joy and renewed commitment. Our clerk, Ron Ferguson, reminded us that FCNL is faith-rooted and non-partisan. He read to us the words of a 17th century Friend named Edward Burroughs that seem especially relevant today: "We are not for Names, nor Men, nor Titles of Government, nor are we for this Party, nor against the other, because of its Name and Pretence; but we are for Justice and Mercy, and Truth and Peace, and true Freedom, that these may be exalted in our Nation." This is the message our sick and divided nation needs to hear today.

The theme of our 2020 FCNL annual session is “fierce love”—a term that may seem strange to mild-mannered modern Quakers, but “fierce love” describes what it means to be prophetic. Fierce means fearless, relentless, unwilling to give up. This is the kind of love that a mother feels for her child when it’s threatened. This is the kind of love that motivated John Woolman, Gandhi, Dr. King, and contemporary Quaker activists like David Hartsough and George Lakey.

As we Quakers gathered virtually in DC, ten thousand pro-Trumper protesters gathered to protest the election results. They felt the same kind of disappointment and fear that many of us felt four years ago, and they were filled with outrage. Their demonstration drew counter protesters and ended up with violence in the streets.

As Friends, we need to mobilize a different kind of fierceness and speak out fearlessly for love and truth and peace. We also need to be as gentle as doves and be a force of healing. Especially with friends and family members who voted differently from us and feel angry and upset. It isn’t easy to be a peacemaker and a prophet, but that’s the work that Spirit calls Quakers to do.

I was excited to learn that the focus of this year’s lobby day is racial justice, and specifically ending police brutality. We are calling on Congress to pass the Justice in Police Act (HR 7120/S.912) or advance legislation that includes the bill’s provision to ban racial and religious profiling; outlaw chokeholds; prevent police officers from using lethal force except as a last resort; and end the militarization of local police departments. Click here to find out how to contact your elected officials to advocate for police reform.

I can’t think of anything more relevant for Quaker to advocate for, especially for Orange Grove Friends. We know only too well about police brutality here in Pasadena. We know what happened to Kendrec McDade, Reginald Thomas, Christopher Ballew and most recently, Anthony  McClain. Some of you participated in a Quaker worship service that took place at the Anthony McClain memorial next to Pintoresca Library, only one mile from our Meeting. Many of us advocated for a police commission and independent auditor that was approved by the Pasadena City Council a week after McClain was killed by Pasadena police. We were disappointed that this commission and independent police auditor aren’t as strong or independent as we would like, but at least Pasadena is moving in the right direction. Let’s not rest in peace until we have ended police brutality in our city and across our nation.

I will provide information so that you can join us in advocating for Justice in Policing. I also hope you’ll go to the FCNL website and make it a regular practice to write to your elected officials. FCNL makes it easy to show your fierce love for justice and truth.

What do we do to help protect Democracy this week? A message from David Hartsough

David Hartsough, one of the most dedicated Quaker peace activists I know, sent me this email even though he is going through a very serious health challenge. Please hold our friend David in the Light, praying for a speedy recovery. He continues to do all he can to work for peace and justice and sent out this email:

Have you heard? Millions of people are planning to protest in the streets if Trump loses the election and refuses to leave office – it's called Protect the Results. This is a coalition of more than 100 organizations that are committed to protecting our democracy if Trump throws our country into a manufactured constitutional crisis.

Here's the plan: we will hit the streets in our communities and demand that every vote be counted, even if it takes days or weeks to get an accurate count from critical states, especially given the expansion of mail-in and absentee voting during the COVID-19 pandemic. We need to ensure that the loser of the election concedes and that Congress, the Electoral College, and state officials honor the accurate, final vote count.


If Trump declares victory before all the votes are counted, makes unfounded claims that the election was "stolen," tries to stop votes from being counted, or otherwise threatens the election's integrity or the peaceful transition of power, Protect the Results will activate nationwide mobilizations.

These potential actions will be happening nationwide next week. There are more than 485 events (and counting!) already scheduled on the event map. People like you are organizing in their communities to prepare to mobilize in case of a worst-case scenario.

If you're ready to save our democracy, check out the events map to find an action on November 4th or November 7th near you. We need you now more than ever.
Posted by LA Quaker at 4:26 PM No comments:

"Confronting the 2020 Election, Part 1" Rabbi Susan Goldberg and Eisha Mason: ICUJP this Friday at 7:30 am