Becoming a Friend of God: the Path of Sufism and Quakerism 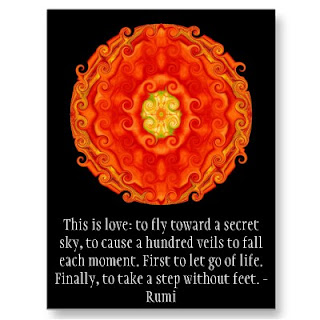 I have been busy these past few months working on a pamphleet/booklet about Sufism and Quakerism, two mystical paths that I have walked in my life and want to share with others. So far, I've written nearly 15,000 words and plan to keep writing as long as Spirit leads. It's been a joy to plunge into the ocean of mystical writings associated with Sufism and to discover many unexpected affinities with Quakerism. I will post my work as it evolves and would appreciate your feedback. My hope is to publish this work as a follow-up to my pamphlet "Islam from a Quaker Perspective."

Outwardly, Quakerism (the mystical branch of Christianity) and Sufism (the mystical branch of Islam) may seem worlds apart. Sufism is associated with dervish dancing, exotic Middle Eastern music, and the ecstatic poetry of Rumi. Quakerism is associated with peace activists, plain-dressed people sitting in silent worship, and William Penn, the founder of Pennsylvania, and the icon of oatmeal. But there are deep affinities between these two spiritual paths, and it is no accident that Quakerism and Sufism refer to its practitioners as “Friends.”

In this collection of short essays I explore the similarities between these spiritual paths and suggest how they can help us to become more intimately connected with our true selves and with Reality. These mystical paths also have a prophetic dimension—a social witness against materialism and injustice--that is much needed in today’s world. We live at a time when most people in the industrial world inhabit a “virtual reality”—a world of television, movies, and the internet—a world where we are defined by what we buy rather than who or what we are. In this unreal world of compulsive consumerism we become addicted to our desires, and eventually become prey to fears and anxieties. These fears become the seeds of bigotry, violence and war.
Mysticism, as practiced by Quakers and the Sufis, can help free us from our fears and our addictions and lead us onto the path of true freedom. As we come to know who we truly are and become acquainted with our true self, we can also form deep, life-transforming relationships with others, based on the realization that each person is sacred and therefore worthy of our deepest attention and respect. This is the way of Friends.

Sufism is the mystical heart of Islam. It emerged in the 8th century CE as an Islamic ascetic movement. Some scholars see connections between Sufism, Buddhism and Christianity and no doubt such connections exist, but most Sufis see their practice as deeply rooted in Islam. Early practitioners of Sufism include Hasan al-Basri (642-728) and Rabiah al-Adawiay (d. 801), the first great female Sufi teacher and poet. Perhaps the most famous Sufi is Jalal a-din Rumi who founded the Mevlevi order (known as whirling dervishes) and has become the most popular poet in America, thanks to Coleman Barks’ imaginative translations. Sufis played a political role in Islamic history, often standing up for the rights of the poor and oppressed. Sufism has also encouraged women to be spiritual teachers and leaders.

Quakerism began in the 17th century in England as part of the Puritan movement to reform Christianity by restoring it to its primitive roots. Quakers believe that each person can have direct access to God or Christ through the Inward Light and the practice of silent worship. Quakers are perhaps best known for opposing war and for championing the rights of women, African-Americans, homosexuals and other oppressed groups. Like Sufism, Quakerism is a mystical faith that emphasizes the direct experience of the Divine Within rather than outward rituals or the words of scripture.

I became a Friend, that is, a Quaker, in 1984 at about the same time that I encountered my first Sufi, a spiritual teacher from Sri Lanka named Bawa Muhaiyaddeen (who was known as “Bawa” to his followers). Coleman Barks, a student of Sufism known for his brilliant translations of Rumi, described Bawa as “one living in the state of union… and totally present in each moment… It was exhilarating to be there where he sat on his bed in Philadelphia, like breathing ozone near a waterfall” (Rumi, The Book of Love, p. 118).

I met this Sufi saint in Philadelphia, where he was well known and much appreciated by many Quakers. Some Friends even joined his Fellowship.

At that time I was editing a multi-faith publication called Fellowship in Prayer (now called Sacred Journey). The pay was modest, but the perks were priceless: thanks to this job, I had the opportunity to interview and worship with a remarkable array of spiritual teachers from various faith traditions.

One of my assignments was to interview Bawa, who first came to the United States in 1971 and established the Bawa Muhaiyaddeen Fellowship in Philadelphia. This Fellowship grew to over 1,000 followers in the Philadelphia area, with branches spreading throughout the United States and Canada, as well as Australia and the UK. I knew very little about Sufism at this time, but I was eager to learn more about it. Having just earned my Ph. D., I asked one of Bawa’s followers a decidedly academic question:

The man smiled, paused to reflect, and then replied, “If a plane is flying at 30,000 feet, and another plane is at 20,000 feet, but you are on the ground, what difference is it to you the altitude of the planes?”

This zinger was just what I needed at this point in my spiritual journey. I realized that to understand Sufism (or any other mystical practice), it wasn’t enough to ask academic questions. I would need to walk the path, or at least one very much like it.

I’m not belittling academic studies. I have the utmost respect for scholars of religion, particularly ones like Huston Smith and Karen Armstrong, who have dedicated their lives to promoting interfaith understanding. If you want to know about Sufism, I heartily recommend the work of Seyyed Hossein Nasr, Laleh Bakthtiar, Carl W. Ernst, Llewellyn Vaughan-Lee, Idres Shah, Hazrat Inayat Khan, Kabir Helminksi, and Annemarie Schimmel. I have also provided a short list of books by and about Sufis for those who want to delve more deeply into this topic.
But books alone will not give you a taste of Sufism, any more than cook books will give you a taste of haute cuisine. To understand Sufism, or any other religious practice, you must acquire first-hand knowledge and experience. As the Psalmist says: “Taste and see!” (34:4). Fortunately, if you are interested, you can easily find opportunities to connect with Sufism and Quakerism and taste the Truth they seek to embody. The appendix lists some of the leading Quaker and Sufi organizations here in the United States.

For the past twenty five years, I have practiced Quakerism and had close friendships with Sufis who have opened my heart and mind to what it means to be a “Friend of Truth/God.” During this time, I also followed the example of Huston Smith and learned about various religions by practicing them. For nine months, I lived in a Zen Buddhist center in Providence, RI, and practiced meditation.

I also spent a year at Pendle Hill, a Quaker center for study and contemplation near Philadelphia, where I studied with many outstanding Quaker teachers, such as William Taber, Sonya Cronk, and William Durland.

Since 9/11, I have adopted many Muslim practices, such as fasting during Ramadan, praying five times a day, and worshipping with Muslims whenever I have the chance. I also make it a daily practice to read the Qur’an or some other Muslim devotional work along with the Bible.
Prior to 9/11 I didn’t have a single Muslim friend, but today many of my dearest and closest friends are Muslims and I have come to feel a part of the Muslim “family” here in Los Angeles. I owe an eternal debt of gratitude to kindred spirits such as Shakeel Syed, John Ishvardas Abdallah, Sherrel Johnson, Noor Malika Chishti, et al.

In 2002, I published a pamphlet called Islam from a Quaker Perspective which attempts to explain Islam to Quakers, and Quakerism to Muslims, in the most succinct possible way. This pamphlet was co-published by three Quaker organizations—Friends Bulletin, Wider Quaker Fellowship, and Quaker Universalist Fellowship—and circulated over 5,000 copies in 100 countries. It was even translated into German.

In this pamphlet, I focused on mainstream Islam and showed that there are many parallels between mainstream Islam and Quakerism. I deliberately omitted any reference to Sufism, however. I did this in part because I wanted to explain what the majority of Muslims believe and practice, and thereby help readers appreciate what James Michener called “the world’s most misunderstood religion.” In this current work I go deeper and explore the inner world of Islam and Christianity as I have experienced it through my study and practice of Quakerism and Sufism. I will examine a wide variety of motifs which are interwoven with the theme of spiritual friendship:

· Mysticism and the path of Friendship.
· The scriptural basis for becoming a Friend of God.
· What is the “Word of God” according to Sufis and Quakers?
· Yearning for the Divine and the Double Search.
· Simplicity, silence and becoming intimate with one’s true self.
· Find a balance between the male and female.
· Stories and Narrative Theology.
· Befriending the poor, the sick, the oppressed to become God’s Friend.
· Becoming a nobody in order to become a true Friend

My hope is that what I have to share abut Sufism and Quakerism will inspire you to go deeper in your spiritual life and to become more intimate with the source of truth within you and within every living being you encounter.
Posted by LA Quaker at 6:59 PM