The Resurrection and our Quaker Faith 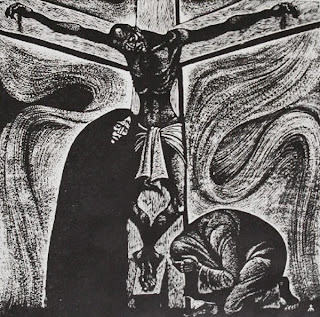 Alana Parkes, a Quaker singer and musician, gave the following testimony about Easter in her album entitled "Grace in Your Face":

"A couple of years ago, I went on a Quaker retreat for Easter weekend. The purpose of this retreat was to consider Jesus' death and resurrection, to figure out what that meant to us, and to our spiritual lives...On the evening of holy Saturday, we gathered in the dark and prayed together, and tried to imagine ourselves as if we were Jesus' friends waiting in the darkness after his death and wondering what would become of us. As I sat there, I was overtaken by a powerful spirit. I felt as if I were one of his friends, as if I were one the the women who had been his disciples. And I felt this powerful sense that my friend had been taken from me and I cried and cried that night. As I sat with my friends and prayed, we turned towards the morning and considered Jesus' resurrection. In that moment my sorrow was transformed and I felt this incredible joy because I learned something new about death: when Jesus said I will not leave you, I will leave my Spirit and my Comforter will always be with you, I knew that was true, and that was true for me. And over the years I was able to cry not only for the death of Jesus, but of my friend Hunter, who died of AIDS when he was only 23 years old....I learned that Hunter hadn't left me, his spirit was with me. And that knowledge has carried me as two of my other friends were infected with this terrible disease. I know that when they pass on, God will take them in His arms and hold them...."

Alana helped to form a Quaker gospel choir whose lead musician, Frederick Evans, died of AIDS in 1994. Never have I heard an album so full of love and life and joy-- yet the specter of death was never far from the minds of its singers.
"AIDS is not only all around us, it's in the middle of us," Alana avows. "As scary as this is, we try not to hide from it....What happens if you stop hiding? When we sing, we lift each other up, and are lifted. We love each other very much and love is the tide that carries us. We are so scared, we are so blessed. Find some friends. Look at what is in the middle of your life and sing it..."
When I heard these words, and the music accompanying them, my heart opened up, and I wept tears of joy. I had just come back from taking a group of Quaker teens to an AIDS hospice center in L.A. The teens had served food and sung Christmas carols to the residents, and it was a very moving experience. During that time of sharing our feelings about AIDS and dying, we came closer together than we ever had before. It was a moment that none of us will ever forget.

Death, and the hope of resurrection, are things that we cannot hide from. How we respond to this mystery says a great deal about who we are, and how we live our lives. There are basically four ways that people respond to the mystery of resurrection: 1) They deny it completely (the skeptical approach) 2) They accept it as an article of faith (the dogmatic approach) 3) They regard it as a symbol (the Jungian approach) 4) They keep an open mind and an open heart (the experiential/existential approach). I would suggest that the fourth approach helps us to get in touch with the heart of our Quaker faith.

To deny the Resurrection entirely is to presume that one has certain knowledge and understanding of the universe and its laws. Such an attitude may seem "scientific" and rational, but it really isn't. A real scientist keeps a mind open to all possibilities, even the miraculous.

On the other hand, to accept the Resurrection as an article of faith means that one is relying on secondary sources--written words rather than a direct experience. The believer runs the risk of placing a distance between himself and what the Resurrection is all about. Such a blind-faith approach may also lead to authoritarianism.

The Jungian perspective appeals to the intellectually minded because it assumes that the Resurrection was a psychological rather than physical reality. The problem with this approach is that we usually do not stake our lives on mere symbols. If the Resurrection is simply an archetype, like that of the mythological Osiris, we can contemplate its meaning with calm detachment. There is no rolling away of the stone, no frantic women running from an open grave in amazement and terror, and no smell of fish when Christ communes with His disciples.

For those who staked their life on the Cross, the death of Jesus was not a mere symbol. A real man suffered and died on a real cross, just a real men and women have suffered and died for the Truth throughout history. What, then, can we know for certain about the resurrection?

The most honest, the most scientific, and perhaps the most Quakerly, answer is: we don't know. And we never will know for certain. Even if tape recorders and video had existed in the time of Jesus, there would still be an element of doubt. There is a limit to scientific and human knowledge.

What we do know is that there was something about Jesus that keeps pushing away the stone from his tomb. Generation after generation, lives are changed, incredible risks are taken, and painful sacrifices are made, because people know in their hearts that Christ lives and is dwelling within and among us.

This, to me, is the real miracle of the Resurrection.

Many leaders have used personal charisma to persuade their immediate followers to "martyr themselves." But Jesus was somehow able to influence people who never knew him to make the ultimate sacrifice. Paul knew Jesus only from a vision, yet this hard-headed, pious Jew was willing to gamble everything, even his life, on the Resurrection. Why? Because he knew in his heart, from deeply felt personal experience, that Christ cannot die, that Truth cannot be destroyed, and that each of us can, through our faith, can become embodiments of the Truth.

Thousands of Quakers and millions of Christians have followed Christ's example and willingly, even cheerfully faced persecution and death.

I don't know if I have that kind of faith. Reflecting on this question, a very honest Quaker woman once said to me, "I haven't been tested yet."

Although I haven't had to face the ultimate test, I have, like most of us, been "quizzed" on my faith by daily challenges. Hardly a day goes by that I don't have to choose between trust and cynicism, between taking risks and playing it safe, between holding grudges and forgiving those who have hurt me. Each day I must choose between affirming and denying Life. Sometimes I make the wrong choices, and live to regret it But when I choose Life, when I choose to love instead of hate, to forgive instead of judge, to give of myself instead of hold back, I feel a joy and power that is impossible to put into words.

Perhaps that is why the Quaker song puts the Christ story in the first person. In singing Sydney Carter's "The Lord of the Dance," we are obliged to identify with Christ:

The whipped me and stripped me and they hung me on high,
And they left me there on a cross to die.
They buried my body and they thought I'd gone,
But I am the dance and I still go on.

They cut me down and I leapt up high,
I am the life that'll never, never die.
I'll live in you if you'll in me.
'I am the Lord of the Dance,' said he.

As I reflect on the mystery of Christ's death and resurrection, I feel immense gratitude that a man named Jesus was willing to gamble his life on the divine potential of us flawed human beings. When a disciple said, "Show me the father," Jesus responded, "If you have seen me, you have seen the father." This statement has often been interpreted to mean that Jesus uniquely embodies the image of God. Such a view is in a way very comforting. It says, "I don't have to do any redemptive work. Jesus will do it all for me." But Jesus did not let his disciples off the hook that easily. What he made clear is that no savior, and no priest, and no paid minister can "do" religion for us. We must work out our salvation for ourselves, in fear and trembling, in love and hope, because just as God can become like us, we can become like God. Jesus says in a seldom quoted passage (it's far too revolutionary!): "To tell you the truth, anyone who trusts in me will not only do what I have been doing, he will do even greater things..." (John 14:12). What a staggering thought! If we trust in the divine potential within us, we will not only equal, but surpass what Jesus did.

This is too radical an idea for conventional minds, but it has been the revolutionary faith of Friends since the time of Fox, and it has inspired incredible acts of faith, courage, and love. The redemptive power of God--the eternal Christ---lives in each one of us. And if we are willing to speak our truth, risk rejection and remain faithful to the Light, we will come to know what James and William Penn meant when they spoke of the "crown of life":

Blessed are those who persevere under trial, because when they have stood the test, they will receive the crown of life that God has promised to those who love God--- James 1:12