Diplomacy Not War with Iran

As the Trump administration sends mixed signals about going to war with Iran, here are statements on Iran by leading Quaker organizations such as FCNL and AFSC 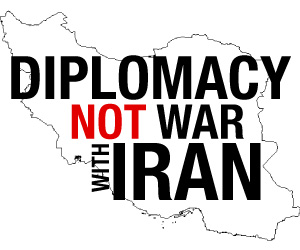 along with a statement that I helped to craft for ICUJP.

Please contact your  elected officials and tell them you oppose war against Iran. Here's a link that makes it easy:  https://www.afsc.org/action/no-war-iran


“WAR IS NEVER THE ANSWER”

Interfaith Communities United for Justice and Peace
Urge Congress and the President to Resolve Conflicts through Negotiations, not War

As an interfaith organization founded in Los Angeles in response to the events of 9/11 with the mission “Religious Communities Must Stop Blessing War and Violence,” we are convinced that  a just and lasting peace can be achieved only by good will and diplomacy. We must do our utmost to prevent an unnecessary and potentially disastrous war against Iran. We are therefore grateful that our California Senators Harris and Feinstein are co-sponsors of S.1039 - Prevention of Unconstitutional War with Iran Act of 2019.
In light of this imminent crisis, we are also urging Congress to approve two important amendments to military spending bills: 1)  the bipartisan amendment to the Fiscal Year 2020 National Defense Authorization Act (NDAA) to prohibit funds from being used for military operations against Iran without explicit authorization from Congress [1], and 2) the amendment already passed by the House repealing the Authorization for the Use of Military Force (AUMF), passed after 9/11 and used by Presidents to justify wars in over 19 countries.
The way of war and violence since 9/11 has proven an utter failure, especially in the Middle East. Since 9/11, the US has spent nearly 5 trillion dollars on regional wars, which have resulted in hundreds of thousands of deaths, an upsurge in violence and terrorism, and the largest refugee crisis since WW II.[2]The only way to achieve a stable peace is through international agreements and negotiations, as evidenced by the Iran Accord, which was signed in 2015 by United States, the United Kingdom, Russia, France, China, Germany and the European Union. This accord convinced Iran to suspend its nuclear program. But even though Iran has abided by the terms of this agreement, the US pulled out and imposed punitive sanctions on Iran, much to the dismay of other signatories and the detriment of the people of Iran.  The decision by the US to choose the way of violence and threats instead of negotiations and treaties has destabilized the Middle East and exacerbated the current conflict with Iran.
We are poised on the brink of another Middle East war, directed by the same people who misled us into war with Iraq.[3] Therefore, we urge Congress to immediately reclaim its authority under Article 1, Section 8, of the Constitution: “Congress [not the President] shall have power…to declare war.”
Congress needs to make it clear that no President may initiate a military intervention in Iran or anywhere else without Congressional approval. War is not the answer.

Here's a statement by the American Friends Service Committee on what you need to know and how can you call for lasting peace.


1. U.S. aggression toward Iran is reaching a fever pitch.

On Thursday, President Trump ordered strikes on Iran, only calling them off at the last minute. That morning, Iran had shot down an unmanned surveillance drone it says crossed into Iranian airspace.
U.S. leadership continues to push us toward strikes against Iran. Secretary of State Michael Pompeo has been heard using the 2001 Authorization for Use of Military Force (AUMF) to justify potential U.S. military action against Iran, and Sen. Tom Cotton called for immediate retaliatory attacks. National Security Advisor John Bolton has a long history of calling for preemptive strikes against aspiring nuclear powers.

2. These recent developments are just the latest in a long line of provocations between Iran and the U.S.

Last week, the United States accused Iran of using naval mines to attack two tankers near the Strait of Hormuz.  Iran then announced it would increase uranium enrichment – a reaction to sanctions reinstated after the U.S. withdrawal from the Iran nuclear deal. What’s happening now follows a long line of provocations, including the incorporation of Iranians in the Trump administration’s Muslim ban and economic sanctions imposed by each nation on the other.  Tensions reach back to the US CIA’s involvement in the 1953 coup that deposed Iran’s democratically elected leader to establish a dictatorship friendlier to U.S. and U.K. oil interests.

The accusations of Iranian guilt in the tanker mining incident are based on the intelligence community’s assessment of limited evidence – an assessment that a Japanese official called “speculation.” In addition, military action against Iran would likely be based on the AUMF and shaky claims that Iran has collaborated with al Qaeda. If there is one thing we learned from U.S. military intervention in Iraq, it’s that war does not make people safer and only further entrenches and expands conflicts.

4. The military-industrial-complex has already benefited from the rhetoric.

The Trump administration used tensions with Iran to justify circumventing the congressional approval process for an $8 billion dollar arms sale to Saudi Arabia.

AFSC stands against any military action against Iran. We reject the idea that national security is a zero-sum game and seek a model of security that recognizes the interconnectedness of all people.
Join AFSC and people across the country in calling on Congress to do everything in their power to stop the Trump administration from bringing us closer to war with Iran! Contact your elected officials today.
FCNL statement:
PRO-DIPLOMACY ORGANIZATIONS CALL FOR VOTE ON UDALL AMENDMENT TO PREVENT AN UNAUTHORIZED WAR WITH IRAN
June 20, 2019 Americans for Peace Now, Arms Control Association, Council for a Livable World, Foreign Policy for America, Friends Committee on National Legislation, Indivisible, J Street, MoveOn, NIAC Action, Ploughshares Fund, VoteVets and Win Without War issued the following statement:
As pro-diplomacy organizations that oppose unauthorized war with Iran, we call on Senators to support the bipartisan Udall amendment to the National Defense Authorization Act and insist that it be put to a vote.
Having violated and abandoned the agreement restraining Iran's nuclear activities and engaged in a series of escalations with Iran, the Trump Administration is now poised to subvert Congress' constitutional prerogative to decide when the United States will and will not go to war. While Iranian misbehavior has increased in recent weeks, the Trump Administration's provocations and saber rattling have made conflict, not negotiations, more likely.
The question of whether American forces should be put in harm's way to strike a country nearly four times the size of Iraq and with more than twice the population is one of the utmost gravity. It must not - and constitutionally cannot - be left to any administration alone, especially one that has acted with gross recklessness and profoundly weakened key alliances and multilateral partnerships essential to addressing threats from Iran. Any unilateral escalation risks both further alienation and getting mired in another disastrous war in the Middle East.
We therefore urge Senators to support and further insist that the bipartisan Udall amendment - which would prohibit appropriated funds from being used for military action against Iran without explicit authorization from Congress - receive a vote in the Senate's present consideration of the National Defense Authorization Act.
The Trump Administration's current Iran policy has proven a disaster. Launching an unnecessary and unauthorized war would do a disservice to our troops and all Americans. If the Senate fails to consider the Udall amendment while legislating on defense authorization, at the very moment the administration is barreling toward an unauthorized and costly war of choice, it would be an historic abdication of constitutional responsibility.