A Time to Break Silence: Reflections on Pacific Yearly Meeting and Minutes of Concern 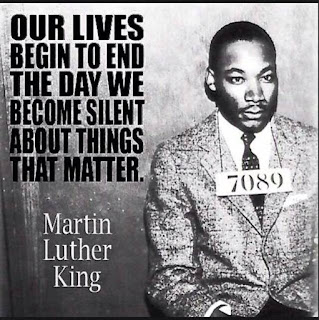 A Time to Break Silence
“It may well be that we will have to repent in this generation. Not merely for the vitriolic words and the violent actions of the bad people, but for the appalling silence and indifference of the good people who sit around and say, "Wait on time.” Dr. King
"In the end, we will remember not the words of our enemies, but the silence of our friends." –Dr King

“There comes a time when silence is betrayal.” –Dr. King
These words of Dr. King speak to my condition as I reflect on the moral depravity of the Trump regime and its attacks on immigrants, the poor, and the environment. How can anyone keep from speaking out during this era where laws and norms of common decency are violated daily, and where our fragile democracy is at risk?

I have been a Quaker for 35 years and I value the contemplative silence of our worship.  Our practice is not simply mystical, but also prophetic. Quakers wait together in silence and listen for divine guidance.  In the silence we often hear the “still, small voice” that leads us to speak out against injustice and to take faithful action, like the prophet Elijah (1 Kings 19).

When I came to Pacific Yearly Meeting in 1989, I was impressed by our faithful public witness. We met in August and held vigils during Hiroshima Day, calling for an end to nuclear weapons. We went to the nuclear test site in Nevada to protest and some of us were arrested. Others went to the Soviet Union to build bridges of understanding that helped bring about a peaceful end to the Cold War. We approved minutes of concern that testified to our commitment to social justice and peace. I felt grateful to be part of a religious community that walked its talk. Over the years, I have served the YM as the editor of Friends Bulletin, coordinator of SCQM’s youth program, clerk and member of the Peace and Social Order Committee for over a dozen years, and coordinator of the Transformative Friends program.

Over the past decade I have seen the prophetic fire of our YM grow dim and our public statements on peace and justice become increasingly feeble.[1] For the past three years Pacific Yearly Meeting has not made any public statement about justice and peace. For me, this is a grievous loss.

Three and a half years ago Ministry and Oversight sent out a letter to the clerks of activist committees like Peace and Social Order stating that minutes of concern are pointless because they do not bring about any change. We were instructed not to bring forward minutes of concern until a new procedure was agreed upon.[2] For three years, we have not had a procedure and have not spoken out. But silence is also a statement, and at times a damning one. There is an old Latin adage:  Qui tacet consentire videtur, ubi loqui debuit ac potuit. “He who is silent seems to consent, when he should and could have spoken.” Dr. King would have agreed with this adage since he knew all too well how many church folk kept silent during the Civil Rights era, much as Pacific Yearly Meeting is doing during the Trump era. Bonhoeffer would also have agreed that silence was betrayal when church goers kept silent in the face of Nazism.

I have been told that Quaker process is slow, and that I should be patient, let go of this concern and let committees handle it in their Quaker time. But three years have gone by and the matter has still not come before a Plenary for worshipful discernment. Last year five of us spoke about minutes of concern during a Plenary session, but there was no follow up during the Plenary, no opportunity for Friends to respond. The five of us never even met afterwards to debrief or to dialogue. We simply presented our views and went our separate ways, and the Plenary continued as if nothing had happened.[3] My understanding of Quaker process is that Friends with different viewpoints meet in person in a spirit of worship and seek Divine guidance. This hasn’t happened yet, as far as I can tell. At least, I have not been invited to be part of such worshipful discernment. We seem to be avoiding this topic rather than seeking Divine wisdom and guidance. In the words of Dr. King, we are sitting around and saying, “Wait on time.”  I ask myself: what would John Woolman or George Fox do under such circumstances? Or would they have been (like FCNL) “persistent, passionate and prophetic”?

I am grateful that I belong to a Meeting which doesn’t keep silent when it comes to social justice and peace. We have approved minutes of concern on immigration reform, climate change, “Ending Endless War,” and housing justice. And these minutes have given support and encouragements to members of our Meeting who feel called to work for justice and peace. I wish that Pacific Yearly Meeting would give similar support and encouragement to those of us who are trying to put our Quaker faith into practice, but that isn’t happening.

I know that most Friends in Pacific Yearly Meeting care deeply about justice and peace, and many are taking action. During my final report as clerk of Peace and Social Order, I asked Friends to stand if they had attended a demonstration in the past year. Almost everyone stood up. I asked how many had written letters to elected officials or gone on a lobby visit. More than half stood up. I asked how many had been arrested or been war tax resisters. At least a couple of dozen people stood up. I was moved almost to tears by how committed Friends are individually to peace and justice. I cannot understand why collectively Pacific Yearly Meeting Friends remain silent.

For the past couple of years even our epistles were silent about our peace and justice concerns until last year until I took the initiative and sent some text to the Epistle Committee describing the important work that the Latin American Concerns committee is doing around immigration issues. I’m pleased that last year’s epistle included this text. If we cannot come to unity about minutes of concern, I hope that our epistle will reflect our peace and social justice concerns.

Since I no longer serve on any committees of PYM, all I can do is speak the truth I have been given, and pray that Pacific Yearly Meeting will once again speak out boldly and prophetically. To me, this is what it means to be an authentic Quaker.

[1] In 2013 I compared PYM’s minutes of concern during the Vietnam Era with those approved in the aftermath of 9/11. I also compared PYM minutes with those of other Yearly Meetings. The results show quite clearly that PYM’s statements on social justice and peace have become increasingly weak. Sadly, things have grown worse since 2013.  https://laquaker.blogspot.com/2013/10/how-did-peace-testimony-fared-at.html
[2] I have become concerned that the Ministry and Oversight has become, in effect, the executive committee of Pacific Yearly Meeting, telling other committees what the can or cannot do. This is not my understanding of Quaker polity. See https://laquaker.blogspot.com/2016/06/minutes-of-concern-and-our-quaker-polity.html
[3] See https://laquaker.blogspot.com/2018/07/our-quaker-witness-personal-testimony.html