What’s your housing story? How did your parents afford a home or an apartment when you were growing up? How do you afford a home or apartment today? How has your housing situation influenced your life? These are some of the questions that we explore in Jill’s Housing Justice Institute and in our monthly GPHAG meetings. We learn a lot about each other, and how housing influences our lives, when we reflect on our housing stories.

I’ve done this exercise numerous times and each time I learn a little more about myself and about housing policy in America. This blog is about what I shared during the most recent GPAHG meeting.

If you want to see a video of the last GPAGH meeting in which Jill and Bert Newton discussed the "Theology of Land and Housing," you can see a livestream of this event at: 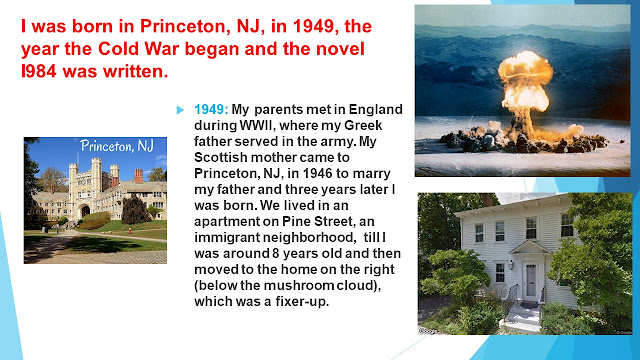 I grew up in Princeton, an elite college town, but the neighborhood where I grew up did not fit the Princeton stereotype. Instead of college professors and professionals, my neighborhood was filled with working class immigrants, mainly Greeks and Italians. Our street was short and narrow, with gasoline stations and diners on the corner, and had the nickname Pig Turd Alley. But it was actually a great street on which to raise a family since homes were side-by-side and had almost no front yards. Instead, there were porches or “stoops” where families hung out, especially on hot summer nights. Mothers all knew each other and took turns watching each other’s kids. It felt as if the whole neighborhood was an extended family. For the first 8 years of my life, we lived in an apartment and then moved across the street to a fixer upper that cost around $13,000. That was a lot of money back then since the average income was $3,600.  (Per year, not per month!)

How could we compare that price to today’s home prices? A good rule of thumb is that you can afford to buy a home that costs no more than five times your yearly salary. If my father’s yearly salary was, say, $3,000, he could afford a $15,000 home. So this fixer up was within his price range.

Another reason my immigrant father was able to afford a home in elite Princeton was due to the Veterans Home Loan Program, which was created in 1943. My Greek father served in the army during WWII, which is how he earned his citizenship, and he was therefore eligible for this program. Rather than provide veterans with a cash bonus to help with purchasing a home, the government decided a loan guaranty was a more powerful and viable long-term solution. And it worked. Being a vet enabled my father to obtain a 30-year mortgage and home in which to raise his family. But the expenses of having a home required that we rent rooms for extra income. Our house had five small bedrooms and two of them were converted to studios and rented out. That’s what made our home affordable.

Our neighborhood began to change in the 1960s when a Princeton University history professor named John Shy moved in next door. He was a nice guy and my father loved to talk with him about his favorite topic, history. (He also took me under his wing and gave me a job helping him with research when I was a freshman in high school, but that's another story.)

Having a professor on Pig Turd Alley changed the character of our neighborhood. Once the first professor dared to move in, others followed. And soon our little street was no longer affordable to anyone making less than a Princeton professor’s salary, i.e. $200,000 a year. We didn't have a term for this back then. Today we call it "gentrification."

I became a home owner myself when I was in my late 40s. I was married to a Methodist pastor and we lived in parsonages for the first 10 years of our marriage. But when we moved to Whittier, I convinced my wife we needed to own a home to gain equity for our retirement. So we bought a condo around the same time that Jill bought her house in Pasadena. Our condo cost $150,000 and we could afford the down payment only because my father-in-law gave us $15,000. We also rented out two rooms for foreign students for around $1200 a month total. That paid for our mortgage and taxes and helped make our condo affordable. We bought and sold our condo at the right time and made a profit. With equity from our condo, we purchased a detached home in Torrance for $450,000 and sold six years later for $650,000—a month or two before the housing market crashed, when prices were at their peak. That’s why I was able to retire at age 60 and devote myself to peace and justice activism.

What helped my family afford a home was a government program that enabled us to buy a home that could be used to generate income as well as raise a family.

What helped me to purchase our first condo was having a wife whose father could help us financially, and renting out rooms helped us to gain equity to purchase a detached home. Now I live with Jill and am able to use some of that equity to maintain and improve our home as well as make it a model of environmental sustainability. I feel very blessed to be a homeowner and would like everyone to have a decent, secure and affordable home. That’s why I work for housing justice.