The joys of winter gardening 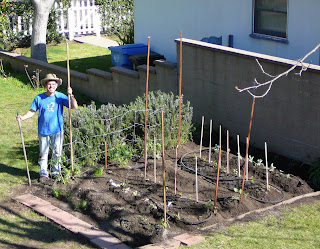 As the rest of the country reels from blizzards and hunkers down for an impending ice age, I am enjoying one of the perks of being a Los Angeleno: winter gardening.
After a week of drenching rain, the LA sun burst forth in all her glory, the May flies swarmed in the humid air, and an inner voice whispered, "It's planting time!"
Since I missed the fall deadline for planting seeds. I went to OSH to buy potted plants. As I filled my cart with my favorite winter veggies, I inhaled the heady and intoxicating smell of humus---a high that gardeners cannot resist. I felt a rush of joy and remembered what Adam told Eve in Paradise Lost: "Not for irksome toil but for delight God made us." In case you're wondering, the delight that Adam was referring to was gardening.

Yesterday I planted my potted veggies in my kitchen garden--a one-by-twelve-foot strip of land next to my back door where I grow greens and herbs for salads and cooking. It wasn't very onerous work since last year I painstakingly prepared the ground, using a pick axe to bust sod that had turned rock hard and didn't want to relinquish its grip. Last year's sod-busting nearly killed my back. This year the soil was soft as cake as I gently turned it over with plastic hand digger. I planted lettuce, spinach, cabbage, cauliflower, collared greens, parsley, cilantro, onions, etc. I also harvested a half dozen exquisitely delicious tomatoes from my last tomato plant, which has not only survived, but thrived. 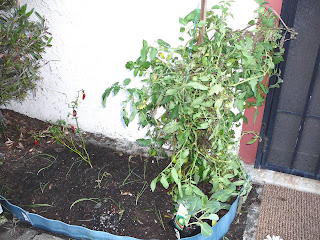 Gardening has been a passion of mine most of my life. When I was in grad school, and spent much of my time in the library, the garden was a godsend--a way to get out of my head and down-to-earth. One of the best lessons I learned from grad school was how to grow basil and make pesto.

When I was living in an apartment in West Philly during the Quaker phase of my life, I had an urban garden which inspired a poem I called "The Surrender Garden" (instead of "Victory Garden") which I will quote later. 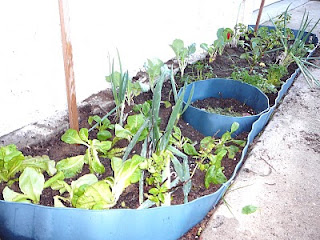 Today I began turning over the soil in my front garden. That's a bigger task than my kitchen garden since it's ten by fifteen feet in size, but since the sod was busted last year and I used lots of grass clippings as mulch, the soil was soft as putty and swarming with earthworms--a good sign of soil health. I was able to turn over half the garden in half an hour without straining a muscle.

I plan to use a seed catalogue this year and experiment with plants not easily found elsewhere--brussel sprouts, beets, asparagus, arugula, and some purple potatoes.

There is no end to the joys of gardening, whether you do it in the winter, spring, summer or fall. For me, it's a spiritual practice that brings the body and the soul in harmony with the Ground of Being--the Creator and Sustainer of Life--and always fills me with deep gratitude. As the Psalmist says, "Taste and see! the Lord is good!"

I farm a room-sized plot of earth
where once a factory stood.
In spring, I'm met by eager volunteers--
onions and leeks, Swiss chard and kale
green and sweet as those in paradise.
But as I turn the soil for the first time,
bricks the size and shape of potatoes
stick in my digger's stubborn teeth.
My brow sweats. My winter-weary muscles ache.
I feel the effects of the fall.

My seeds are scattered to the sound
of kids and cars, trolleys and boom boxes.
I use my hands instead of a digger
because I love to mold and stroke the earth,
to feel it touch my skin.
I sit in my garden like a kid in a sandbox
and think of my Greek grandfather
for whom gardening was no game.
With the sun and rains
weeds rise up like angry peasants
insisting on their squatter's rights.
I can't blame them.
I've been an absentee.
Down on my knees, I make a space
for my seedlings as I pull the weeds
carefully by the roots,
roots that go on and on
like my compulsions and obsessions.
This is the work that never seems to end,
the work my father and his father handed down.

Some evenings I come here simply to sit alone,
and watch things grow.
It's quiet and still as a church.
At the far end of the garden
a woman waters her flowers,
and the smell of wet earth rises
like a prayer, an offering,
into the darkening sky.