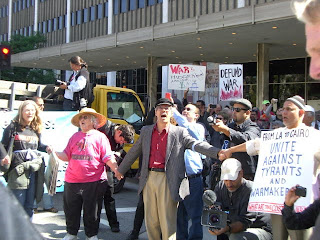 I used to marvel reading about how early Quakers went to prison cheerfully, often singing hymns of praise to God. I now have a sense of how they felt, after being arrested in front of the Federal Building in downtown LA on Oct 7, the 10th anniversary of the US invasion of Afghanistan.To protest what is now the longest war in US history, 14 religious leaders in LA (including myself) committed civil disobedience and were arrested. I had the honor of being among them.
As the police placed handcuffs on me in front of a crowd of witnesses that included some of the most dedicated peace activists in the city, I felt a surge of joy, as if the gates of heaven were opening up.

Unlike the Quakers of old, I didn't have to go to a dismal dungeon where there was a chance I would end up dead or seriously ill. The police were very kind--they even called us the "clergy council"--and the company of 7 women and 7 men was delightful.

I spent the afternoon in the tank with some of the best people I know--Rev George Regas, intrepid rector emeritus of All Saints, Pasadena; Shakeel Syed, the executive director of the Islam Shura Council of So Cal (and a best man at my wedding); Ralph Fertig, former freedom rider and colleague of MLK (and currently professor at the USC School of Social Work); Friar Tom, a flamboyant Catholic priest; Father Chris Ponnett of Pax Christi; and a gentleman named John who has just published a book on the "History of Peanut Butter."

The holding tank was cold and sterile, the processing long and tedious, but the company heart-warming and delightful.

We ended up spending 6 hours together in a holding tank until we were released on our own recognizance. During that time, we shared stories about our lives, discussed politics, and enjoyed each other company. Thoreau was right. When the system is corrupt, the best place for a free person is in the slammer.

On November 4, we must appear in court to be sentenced. We will probably receive a year's probation.

This small act of disobdience set an example for the young people who now see that we old guard peace activists support them. We hope our action will awaken people in the religious community to their power and encourage them to resist the domination system that has taken over our country (and is taking over the world).

The response from friends has been very encouraging, and includes people of all theological persuasions, from liberal to conservative evangelical. One thing we can agree about: we are tired of theoligarchs and plutocrats running all over us. We want the wars to end, and our tax dollars to be used for education, health care, and other vital social needs.

To achieve these goals, we stand up for ourselves and demand justice. We have to be just as bodacious, creative and determined at the Tea partyers. And if we exert enough pressure, we can make a difference.

As more and more people follow the example of the "Arab spring" and reclaim their power, the powers that be will no doubt become increasingly fearful and respond inappropriatedly, as they did when they ordered police to arrest 700 demonstrators on the Brooklyn Bridge. Such overreactions can cause a backlash that will help to strengthen the resolve of those who want to take back the country from the banksters and the Wall Street elite. So far, there are signs this is happening.The Occupy Wallstreet movement has grown exponenientally, from 70 to 700 actions in one week. The City Council of LA is considering endorsing this movement.

Early Quakers had a great name for a similar struggle that went on in the 16th century. They called it the "Lamb's War." By this term they were referring to the Book of Revelation--a work that has been coopted by fundamentalists, but is really an anti-imperialist tract calling for nonviolent resistance to the demonic domination system. For the past 350 years, real Quakes have been fighting this Lamb's War, using nonviolent, spiritual weapons. This is a subject for another post at another time.

For now, let me conclude by saying the media gave us excellent coverage for which I am grateful:


***********************
My friend Gene Rothman, a member of the local chapter of the Parliament of the World's Religions, wrote this piece which beautifully captures the spirit of this rally. My only disagreement with Gene is over the the size of the rally--a subject of endless dispute among activists. At 9 AM we filled La Placita Church with what I estimate to be have been been 200-300 people. I would guess that around fifty to a  hundred young people from Occupy LA joined us. Others came just for the noon arrest. By noon the crowd had thinned out to perhaps a 100-120, but over the course of the morning I would estimate that at least 300-400 people took part.

It was not a huge rally, but it brought together a very diverse group, as Gene rightly notes: young people, veteran activists, and labor activists. This is how democratic movements are created, one step at a time.


**********************
“Stop Funding Wars!  Fund Jobs and Schools!!”  was the theme of a peaceful demonstration , drawing a crowd of some one hundred or so demonstrators under the auspices of the Interfaith Communities United for Justice and Peace (ICUJP).  A wide range of faith groups, secular organizations, and labor unions were also represented by their clergy or other leaders.  The march passed by the encampment of Occupy L.A. demonstrating our solidarity with them.  (Occupy voted last evening to endorse our march and some of their members also joined our march).

Some fourteen religious activists volunteered to commit an act of non-violent civil disobedience for which they were arrested.  [Full disclosure: I personally know four of those who did so.]

Apart from speeches from religious leaders, other notable speakers included Maria Elena Durazo from the AFL-CIO and Black activist Cornel West, each of whom drew sustained cheers from those present.  Durazo said that what she learned from her activism is that some government officials may have their hearts in the right place, but they will not do the right thing until and unless there is massive pressure from the streets to do so.

Cornel West—who is on a tour with Tavis Smiley visiting cities with “Occupy” movements—at one point addressed the police who encircled all of us and said that they, like nurses, teachers, and others were part of the 99% of America who are hard-working and who are not getting nearly what they deserve.  Addressing the religious participants, he cited the importance of welcoming and including secular leaders, explicitly including humanists, agnostics and atheists as well.


One popular theme in speeches, comments and elsewhere was summarized in a picket sign that read:  “Prosecute the Greedy, Feed the Needy.”
Folk singer/activist Ross Altman did his best to encourage the reactivation of the labor movement by citing anecdotes and singing songs by Woody Guthrie.   Guthrie was once taken to a hospital where he was asked to indicate his religion.  He checked an open-ended item and wrote: “All.”  The clerk said she was a workingwoman and asked him to give her a break to be more specific—to select SOME religion. Woody wrote next the word “All”—“or NONE. “

Guthrie was also once accused of being a Communist.  He replied: “Well, I don’t know about that but I’ve been in the red my whole life.”  Finally, Altman urged a revival of the song “The Banks Are Made of Marble” for today’s times to help workers and ordinary folks.  The crowd sang it with gusto.   [See lyrics at the end].


Impressions from Your Intrepid Reporter:  [Opinion].
Protests are building around the “occupy “ movement city by city and around the world.  In , however, there are different streams with little coordination as yet.   Although “Occupy L.A.” endorsed the interfaith march, they are a younger crowd and the interfaith group was largely older folks with civil rights and peace activist backgrounds. Veterans who also oppose the war elected to do their own separate demonstration at 4:30 p.m.  Today.  Similarly, ANSWER chose to do its own separate march.
Some organizers said they had hoped for a better turnout but added that the diversity of participants and the better than expected representation of labor groups were very positive developments.