The Life and Legacy of the Brintons: Resources and Links 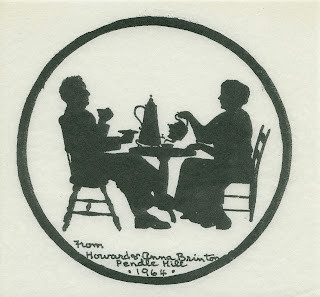 I am thrilled that in a couple of weeks, my biography of the Brintons, which I began thirteen years ago, will finally be published by FGC Quakerbridge. Entitled "Howard and Anna Brinton: Reinventors of Quakerism in the Twentieth Century," this is the first book-length biography of this influential Quaker couple.
Beginning July 1, I will also be giving a workshop on the Brintons at the Friends General Conference gathering in Colorado. I am excited about the opportunity to share what I have learned about the Brintons with Friends, and also with the world (through this blog and my book). I am also very pleased that Jill will be joining me and be part of this amazing gathering of Friends from across the continent.
For those who want to learn more about Howard and Anna Brinton, I recommend these topics and links:


1.          Letting One's Life Speak. How did the Brintons exemplify Quaker values and also face the challenges of 20th century Quakerism: conflicts between Orthodox and Hicksite, liberal and Christ-centered, East Coast and West Coast Friends. What do the Brintons tell us about the challenges we are facing as Quakers today? The importance of biography and of family/community for Friends. For the story of how Howard's memoir was written, see http://laquaker.blogspot.com/2013/01/yuki-brinton-and-autobiography-of.html

"Growing up in Brinton Country": http://quaker.org/quest/QT-22-Brinton-Biography-Excerpt.html


2.          “Translucent teachers of the Light”: the Brintons as Quaker Educators. How did the Brintons influence Quaker educational ideas through their long involvement at Pendle Hill? What was the role of Anna as well as Howard in this educational experiment? http://laquaker.blogspot.com/2013/06/translucent-teachers-of-light-howard.html


3.          The philosophical/theological basis of Quakerism and the “invention” of our modern Quaker testimonies (Simplicity, Peace/Harmony, Integrity, Community, Equality). Howard Brinton not only studied religion with Rufus Jones at Haverford, he also studied philosophy at Harvard with Henry James, George Santayana, Josiah Royce, and was deeply influenced by Barclay and Fox. We will examine the theological ideas and agenda of Friends for 300 Years, and also how Brinton “invented” the modern Quaker testimonies we call SPICE. See http://laquaker.blogspot.com/2009/10/how-how-brinton-invented-spice-quaker.html and http://laquaker.blogspot.com/2011/04/howard-brinton-as-theologian-and.html
See  also "Howard Brinton and the World Council of Churches" http://quest.quaker.org/Manousos-QT-17.html
4.          Science and Quakerism. Trained as a physicist at Columbia and Berkeley, Brinton taught physics at Earlham College and was interested in an “experimental” approach to religion based on the methodology of science. His interests ranged from the German mystic Jacob Boehme to modern evolutionary theologians like Teilhard de Chardin. How has the scientific method and ideas influenced modern Quakerism? See http://laquaker.blogspot.com/2013/06/quakerism-mysticism-and-modern-science.html


5.          The Peace Testimony. The Brintons met while volunteering for the AFSC during World War II and maintained a keen interest in peacemaking and the AFSC throughout their lives. We will explore how Brinton’s writings and Spirit-led activism helped shape a Quaker understanding of the spiritual basis for Quaker peacemaking. See http://laquaker.blogspot.com/2013/06/the-making-of-20th-century-quaker.html

I also want to recommend a recent article by Chuck Fager, who responded to a review copy of my book  with some very probing questions about the Brinton legacy. See http://quaker.org/quest/QT-22-Brinton-Review.html

For those who would like to do a study of Brinton's theology, I have put together this study guide:

Quaker Beliefs According to Howard Brinton:


What do the Inward Light and your spiritual experience reveal to you?


Quakers do not have a creed, but hopefully we do think about our religious experiences from time to time. That is what theology is all about—reflecting on and sharing our thoughts about what we experience in times of worship and practicing our faith.


In Friends for 300 Years, Brinton makes it clear that what unites Friends is not our theology but what Robert Barclay calls our “secret want” to find “something beyond words which might satisfy [our] weary souls” (p. 39).


Today you will have an opportunity to share what you believe, and to learn what others believe, and especially to learn something about what early Friends believed, according to Howard Brinton. Here are some questions that Brinton addresses in Friends for 300 Years.


•Is the Bible the ultimate source of authority, or the Inward Light, or both?
•What is the difference between conscience and the Inward Light?
•What role does reason play in Quakerism?
•Is the Light universal? Is there a Christian basis for universalism?
•How do Friends feel about the historical Jesus? What is the Universal Christ?
•What is the Quaker view of the atonement? How has this shaped Quaker attitudes and actions?
•What did Quakers believe about Good and Evil and human responsibility? What about the Fall of Man? Original sin?
•What did Quakers believe about human perfectibility? How do Friends feel about the relation between the Divine and the human?


For Brinton’s response to these questions, see Friends for 300 Years, Chapter III, “The Light Within as Thought About.” Here are some quotations from this very important, though often overlooked, chapter:
Scripture and the Holy Spirit. “For the Protestants, the Scriptures were primary and the Holy Spirit secondary as an aid to their understanding. The Bible was the word of God. Nothing could be added to it or subtracted from it by any further revelation of religious truth. For the Quakes the Light Within or the Spirit was primary and the Scriptures a word of God, that is, secondary, confirming and clarifying the revelations of the Light Within”(Brinton, p. 40).
Conscience and the Light Within. “The Light Within is not to be identified with conscience. Conscience is not the Light in its fullness but “the measure of Light given us.” The Light illumines conscience and seeks to transform an impure conscience into its own pure likeness” (p.43).
Reason and Religious Truth. “A great deal is said in Quaker writings about the inability of reason to reach religious truths unless the Light, or the Scriptures or other writings inspired by the Light, furnish it with the right premises on which to work. The same is true in science. Scientific truths are not produced by reason alone, but by reason operating on physical facts ascertained through experience” (p. 45).
Universalism. “No Quaker belief aroused more opposition than the doctrine that the Light of Christ had been given to all men everywhere, since the beginning of the human race. This concept was especially repugnant to Protestants who believed that only the elect would be saved” (p. 45).

The Atonement. “The Quakers did not apply to the sacrifice of Christ the Old Testament concept of a blood sacrifice offered to appease an angry God….” Rather, Christ’s sacrifice was to “bridge the gap between the divine and the human, overcoming the isolation and estrangement of the human individual. This would be an at-one-ment, a uniting of that which had been separated”  (p. 53).
Man’s Responsibility for Good and Evil. “On two important religious doctrines the Quakers differed from their Protestant opponents and were closer to the Catholics. They believed that righteousness could not be imputed to man by God unless man was actually righteous, while the Protestants believed that God, because of the sacrifice of Christ, could impute Christ’s righteousness to man even though he continued to sin. The Quakers also believed that perfection and freedom from sin was possible in this world, while the Protestants believed that all men, even the saints, continue to sin in ‘thought, word and deed’” (p. 55). “This brings us to the heart of Quaker theology as it grew out of actual experience. Man finds himself in the twilight zone of reason, poised between two worlds, an upper world of Light, and a loser world of Darkness, a Spiritual world which is superhuman and a material world which is subhuman. He is free to center his life in one of the three: he can live by the Light, he can live by human reason, or he can live at the mercy of his sensual cravings. His body is animal, his mind rational and the Light Within him is divine. He is never without all three, though the three are so intimately related it is impossible to distinguish between them sharply. Much depends on their relationship. The Light of Truth should be a guide to reason and reason should help instinct in a properly ordered life. This is a simple empirical theology, but it seems up much of early Quaker thought” (p. 63).
Perfectionism. “The Quakers believed that the process of redemption and regeneration might go so far as sometimes to free man completely from sin and leave him at least temporarily in a state of perfection. It is easy to misunderstand this doctrine. Perfection not only permits growth, it requires growth. Did not Christ grow in wisdom and stature (Like 2:52)? As Barclay says, a perfect boy can become a perfect man and he is not a perfect boy unless he is on the way to becoming a man.” (p. 59).