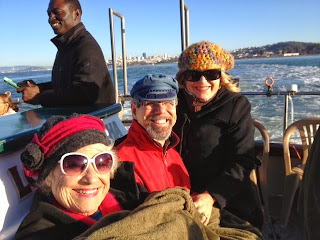 We just returned from an amazing week-long road trip from Pasadena to San Francisco with Jill's Mom (who is 83 years old, and full of fun and enthusiasm for life). We saw a glorious display of frisky monarch butterflies near Pismo Beach, cruised along the breathtaking California coast to Big Sur, and explored the many wonders of Monterey and San Franscisco. Among the highlights of our trip was visiting my brother- and sister-in-law and my eleven-year-old nephew, who has become an accomplished fiddler.  We enjoyed visiting the Monterey Aquarium, where we were blown away by the beauty of the jelly fish.
We stayed in a motel in the Tenderloin, explored China town, the Mission District, and Fisherman's Wharf. We worshipped with Friends and  lunched with Steve Matchett, clerk of San Francisco Friends Meeting, and a man with a mission: to spread Bible studies throughout Quakerdom. Steve also “walks his talk” when it comes to environmentalism: he won't ride in a private car and travels by bike and public transport!
After going to the amazing David Hockney exhibit at the De Young Museum, we visited with one of the leading Quaker peace activists, David Hartsough, in his home in Haight Asbury. Director of Peaceworks, and co-founder of the Nonviolent Peaceforce, David has been arrested over 100 times for his anti-war work and is so passionate about ending war that he supports the efforts of David Swanson to start a "abolish war" movement, similar to the movement that abolished slavery. Along with Joyce Hollyday, David is author of Waging Peace: Global Adventures of a Lifelong Activist, which is being released next fall. Here’s some snippets from this remarkable book:


David Hartsough has used his body to block Navy ships headed for Vietnam and trains loaded with munitions on their way to El Salvador. He has crossed borders to meet “the enemy” in divided Berlin, Cold War Soviet Union, and Iran. He has marched with mothers confronting a violent regime in Guatemala, stood with refugees threatened by death squads in the Philippines, and been attacked with tear gas and concussion bombs in Palestine.
Waging Peace: Global Adventures of a Lifelong Activist provides a front-row seat to many of the most significant nonviolent struggles around the world in the past half-century. It is the story of one man’s effort to live by Jesus’ command to “love your enemies” and the example of Martin Luther King, Jr.
Hartsough tells the story of witnessing his dear friend Brian Willson, while participating in a peaceful protest, get run over by a train loaded with munitions destined for Central America. Passing his severed leg, Hartsough ran to Willson’s side and joined others attending him while he lay on the tracks bleeding, suffering, broken bones and a gaping hole in his head. That moment deepened his determination to do everything he could to stop war through nonviolent means.
Waging Peace is testament to the difference one person can make. In a world permeated with violence and despair, it provides inspiration for those involved in struggles for peace and justice—and those who may want to join in.
****

David sent me a review copy of this book, which I am eager to read and review in my blog.


What a wonderful way to end 2013 and begin a new year! Like my delightful wife Jill, I am full of hope and gratitude to God for this opportunity help bring God's kingdom a little closer to earth.

Here is her report on our road trip, which focuses on the need for decent, affordable housing, a prerequisite for true shalom:


Today, Dec. 31st,  I am with my dear husband and sweet wonderful Mom here on the Central Coast of California. On Christmas day we took a jaunt up the magical coastline to San Francisco—God led our every step!  I’m so thankful for tons of laughter, the breath of history and struggle for justice we witnessed in art and murals, the indescribable natural beauty that God painted for us all along the way. I am blessed beyond imagination to have such a wonderful husband and Mom, family and friends like you who have believed in me and my calling.
Where every we go, the cost of housing is one of the biggest factors in people’s lives. We stayed in a inexpensive hotel in the tenderloin district of San Francisco (where homeless roam the streets) next to a towering vacant building where all the low-income folks had been evicted, and is now being converted into a fancy hotel. Six such hotels are now in the works in Pasadena, that once housed many of the folks now on our streets. Service workers everywhere struggle to find an affordable place to live close enough to work without spending hours on the road using precious gasoline. As I witness city after city up and down the coast, and hear stories of people we meet, I am more convinced than ever of God’s calling on my life to address the housing crisis in our nation.
When I attended Cal Poly, San Luis Obispo, from ’71-’76 I was deeply involved in campus ministry. I memorized the full book of Philippians! (notice that was in the past tense…) As I think back on 2013, I have found myself re-quoting many of these verses over and over this year. I take much hope in joy in this passage (Philippians 4: 1-9) in amid the beautiful struggle for mercy and justice.  May you too find this passage a joy as you enter 2014.
With loads of love and appreciation for you who have made my work possible though your prayers, giving and love.


Therefore, my brothers and sisters, you whom I love and long for, my joy and crown, stand firm in the Lord in this way, dear friends! I plead with Euodia and I plead with Syntyche to be of the same mind in the Lord. Yes, and I ask you, my true companion, help these women since they have contended at my side in the cause of the gospel, along with Clement and the rest of my co-workers, whose names are in the book of life. Rejoice in the Lord always. I will say it again: Rejoice! Let your gentleness be evident to all. The Lord is near. Do not be anxious about anything, but in every situation, by prayer and petition, with thanksgiving, present your requests to God. And the peace of God, which transcends all understanding, will guard your hearts and your minds in Christ Jesus. Finally, brothers and sisters, whatever is true, whatever is noble, whatever is right, whatever is pure, whatever is lovely, whatever is admirable—if anything is excellent or praiseworthy—think about such things. Whatever you have learned or received or heard from me, or seen in me—put it into practice. And the God of peace will be with you.
Posted by LA Quaker at 10:16 AM