Surmounting the limits of Quakerism: A reflection on the Friends World Committee for Consultation

I am thrilled that the Board of Western Friend will be coming to Orange Grove Meeting this weekend,  even though I am a little overwhelmed by the prospect of coordinating arrangements for them.  Nonetheless, I am glad that I took on this responsibility. I love this magazine.  For eleven years I was its editor when it was still called Friend Bulletin, the name that Anna Brinton bestowed on it in 1929. Editing this magazine was a life-changing experience for me and I hope for many readers. I came to know Friends from the three Western Yearly Meeting--Pacific, North Pacific and Intermountain--from states including Montana, Utah, Colorado, New Mexico, Arizona, Oregon, Washington, and Hawaii. I attended over 33 Yearly Meeting sessions (my favorite location was Ghost Ranch in New Mexico) and had the joy of seeking out the most interesting and passionate Friends and convincing them to write articles. I also had the opportunity to edit three timely books: Western Quaker Reader, Compassionate Listening and Other Writings by Gene Hoffman, and EarthLight: Spiritual Wisdom for an Ecological Age.
Western Friend continues to publish relevant books, most recently Eastern Light by Steve Smith, an outstanding Quaker philosophy professor and former clerk of our Yearly Meeting. I am eager to read Steve's book, which is intriguingly described as follows:

This spiritual autobiography integrates perspectives of early Quakers, Zen Buddhists, and contemporary Christian thinkers. Smith draws from these sources as he tells a personal tale of his Quaker childhood, his years of spiritual crisis, and his ultimate return to Quakerism by way of Zen Buddhism. Along the way, Smith explores and explains the Quaker peace testimony and liberal Quaker views of gender, power, education, and care for the natural world."

You can find out more at  https://westernfriend.org/
Today Western Friend is in the capable hands of Mary Klein, a Friend from Palo Alto Meeting who shares my concern for social justice and spirituality. This is the unabridged version of the article that I wrote for the most recent issue of Western Friend: 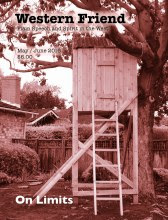 Consultation, she suggested that I write about it for the issue on “Limits,” with April 1 as the deadline. My initial response was: “Is she kidding?” I was grateful for her offer, but something in me bristles at the word “limits.”