My summer trek for the interfaith movement begins with a wonderful weekend in San Jose, and the tragic news of the Freedom Flotilla 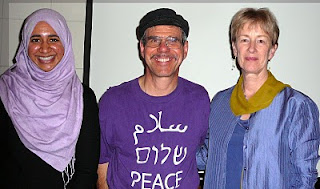 I just returned from a wonderful weekend in San Jose, CA, which brought together outstanding leaders of the interfaith community who shared their vision of a world in which people of diverse faiths work together for justice and peace.

Pictured here are two of the panelists, Zahra Billoo (left) and Ellen Grace O'Brian (right). Rabbi Elisheva Salamo couldn't have her picture taken because of Shabbat. Below are the two Quakers who made this weekend possible: Donna Poulos and Jeff Kroeber of San Jose Meeting. (Wild, silent applause!) 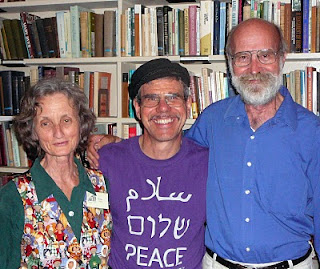 Over 50 people showed up for a delicious potluck meal and an inspiring panel discussion, which included a talk by Rev. Ellen Grace O'Brian, Founding Ministear of the Center for Spiritual Enlightenment, San Jose, and member of the Board of Trustees of the Council of PWR, Zahra Billoo, Program and Outreach Director of the Council on American-Islamic Relations (CAIR), an activist attorney committed to social justice and community, and Rabbi Elisheva Salamo of Keddem Congregation, Palo Alto, who taught Jewish culture at Catholic high schools and attended PWR. We had a lively discussion about what we could do to promote interfaith understanding. I was esp. pleased to meet a couple of Catholic high school students (one of whom was a Muslim!) who want to do interfaith youth projects in their community.

During our Quaker meeting for worship on Sunday, a woman gave an inspired prophetic message. She said that during Memorial Day, we should remember not only soldiers who have died fighting to defend US interests, but also peace activists who sacrificed their lives for peace. I thought of Ben Linder (killed by contras in Nicaragua), Rachel Corey (killed by Israelis intent on destroying a Palestinian home) , Tom Fox (killed by religious fanatics in Iraq), and now the Turks killed by Israeli commandos while trying to bring humanitarian aid to Gaza.

Upon learning of this brutal attack on peace activists, I went to the Israeli embassy to join protesters who included Muslims, Christians and Jews. I was pleased to see my dear friend Dick Platkin, a founding member of LA Jews for Peace, and Marcy Winograd, a Jewish peace activist running for Congress against Jane Harman. I was glad to stand in solidarity with people of conscience who oppose the siege of Gaza and other Israeli war crimes.

I will be writing my elected officials tomorrow calling for a condemnation of Israel's brutal attack on unarmed ships in international waters, which is clearly a violation of international law. I will demand that those responsible for this crime be brought to justice.

I also want an end to the siege of Gaza and an end to the occupation of the West Bank so that Palestinians can enjoy the same freedoms and the same rights enjoyed by Israelis--the right to travel to and from their homes without being harassed, the right to buy land and build homes in their homeland just like Israeli Jews, the right to travel to and from their homeland without having to seek permission from Israeli authorities--in short, the rights that free men and women deserve. As our Declaration of Independence says, all human beings "are created equal and endowed by their Creator with certain unalienable rights...."

Palestinians are condemned when they resort to violence, but the Freedom Flotilla is clearly an effort to use Gandhian nonviolence to bring about justice. We need to give these brave nonviolent soldiers for peace our support.