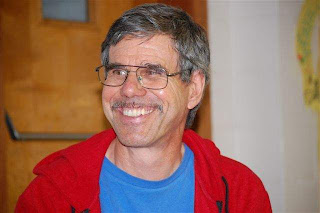 Michael Gillespie sent me this article which appears in Washington Report on Middle East Affairs (Sept/Oct, p. 66). He also took this picture of me looking amazingly happy. Thanks, Michael, for capturing how I feel when I am following the Inner Light!
Anthony Manousos of Culver City, CA spoke to Iowa peace and social justice activists at the Des Moines Valley Friends Meetinghouse on June 28.
“I study the Koran and I hang out with Muslims,” said Manousos, flashing a smile.
The Quaker activist speaks with unabashed enthusiasm about his continuing interest in other religions and his involvement in interfaith activism.
“After 9/11, I felt led to fast during Ramadan. That was my entrée into the Muslim community. I told Muslims I was fasting and they were so excited. They invited me into their homes. I decided to continue fasting during Ramadan and have done so now for 10 years,” said Manousos.
The former English teacher and editor is touring the USA, speaking about the growing interfaith movement and his experiences at the Parliament of the World’s Religions, which convened in Melbourne, Australia in 2009.
The author of a pamphlet published by the Friends Bulletin and titled Islam from a Quaker Perspective and Friends and the Interfaith Movement (Updated 2008), Manousos told his Des Moines audience that he had spoken about the Israel/Palestine crisis and his experience in the Holy Land in the context of his presentation about the Listening Project at the 2009 Parliament.
An accomplished and experienced activist, Manousos serves on the boards of the South Coast Interfaith Council and Interfaith Communities United for Justice and Peace in the Los Angeles area and is vice-chair of the executive committee of the Southern California Committee for a Parliament of the World’s Religions. He is also active in the Quaker Christian and Interfaith Relations Committee of the Friends General Conference, a national organization.
“When I heard about the Parliament, I knew I needed to go. The Parliament is kind of like the Olympics of interfaith. It’s held every five years and it attracts major religious leaders and spiritual leaders,” said Manousos.
Australia had not been high on his list of places he wanted to visit, said Manousos, but when he learned that the 2009 Parliament of the World’s Religions, the world’s largest interreligious gathering, would convene in Melbourne, he was intrigued.
“I e-mailed Quakers in Australia and got such a friendly response that I ended up staying for six weeks. I went not only to Melbourne but to Canberra, Sydney, and eventually to Adelaide where I spent a week at a national Quaker conference,” said Manousos.
The Parliament features hundreds of lectures, workshops, forums, and panel discussions by people from all the various religions. Manousos noted that several religious leaders from the USA attended the Parliament in Melbourne, including Sister Joan Chittister, a Benedictine nun and internationally renowned author and lecturer on peace and justice, spirituality, and women’s issues, and Michael Lerner, a rabbi, political activist, and editor of Tikkun magazine, a progressive Jewish and interfaith journal.
And we now have a Chair of the Board of Trustees of the Council for the Parliament of the World’s Religions who is a Muslim, Imam Abdul Malik Mujahid, said Manousos.
Manousos says he is encouraged that so many people from so many different faith traditions are interested in the rapidly expanding interfaith conversation.
The Parliament in Melbourne “drew about 6,000 people, which was very good given the [distant] location and the economy. A lot of conferences were cancelled, but this one went on because there was a lot of strong feeling, especially since 9/11, very strong feeling that this one needed to go on, a lot of passion,” said Manousos.
The theme of the Melbourne Parliament was “Helping each other, healing the earth,” said Manousos.
“You can’t turn around the whole world overnight, but what we can do is be supportive when people are moving in the right direction,” said Manousos.
Manousos blogs at http://LAQuaker.blogspot.com. He has published a report on his experiences at the Parliament in Melbourne in Universalist Friends, the Journal of the Quaker Universalist Fellowship, which is available on-line at http://www.universalistfriends.org/journals.html.
Posted by LA Quaker at 6:27 PM