Remembering Kathleen Ross and her dedication to interfaith peacemaking 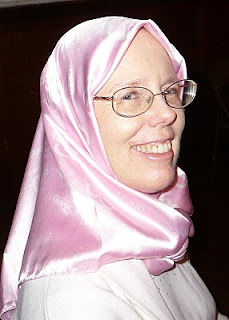 Today marks the 14th month since my beloved wife Kathleen Ross passed on, and it's also the midpoint of Ramadan. During this time of fasting and prayer I can't help remembering how Kathleen supported my interfaith work and fasted during Ramadan (which caused some Methodists to worry about her health!). I am including an article about her fast that appeared in Circuit West, the Methodist newspaper.

During her final year, Kathleen showed her respect for Muslims by wearing an hijab during Ramadan (this was partly to cover her head, which became bald due to chemo). Our Muslim friend Sherrel Johnson supplied her with beautiful silk head scarves, for which we are eternally grateful. I might add that Sherrel is a member of the Council on American Islamic Relations (CAIR) and one of the most deeply spiritual and kind people I know. When she learned of our cancer journey, she wrote us an email expressing a profound, though challenging truth: "God must love you a lot to send you such trials." She also added lovingly: "If there is anything I can do for you, if you need a place a stay, please let me know." Such is Sherrel's heart, and the heart of the Muslim faith.

We received many outpourings of love during our cancer journey, but none moved me more deeply than when our dear friend Shakeel, the executive director of the Islamic Shura Council of Southern California, came with his wife to visit and pray for Kathleen on Mother's Day at the City of Hope. Kathleen was in ICU and heavily sedated, but I am quite sure that she heard with her spiritual ears Shakeel's deeply felt prayers. I will never forget that act of unexpected kindness, coming at a time when I needed the prayers of a true friend.
Since Kathleen's death, Shakeel has graciously invited me to his home for a family iftar (fast-breaking meal) during Ramadan--an act of kindness for which I cannot thank him enough. He makes me feel a part of his wonderful family (he has three teenage girls and a boy, as well as a lovely and devoted wife).

Before our meal, Shakeel and his family always face Mecca and bow down in worship to God, the "most caring and merciful." And I feel blessed when I bow down in worship with them, After the formal prayers there is a time of spontaneous prayer or supplication (dua) during which Shakeel always lifts up "Uncle Anthony" and "Aunt Kathleen who is in the highest place in paradise." Just thinking about his words, and the feeling behind them, brings tears to my eyes.

Perhaps this is why my heart breaks when I hear the malicious lies that are being spread about Muslims, and the hate-mongering and scape-goating being spread by Fox news and right-wing politicians. And that's why I have devoted a lot of my time during this Ramadan to combating the Islamophobia that is poisoning the soul of America.

In my blog (http://laquaker.blogspot.com/2010/08/quran-burning-and-other-issues-of.html_) I talk about the rise of Islamophobia and what we can do to counteract it. I am quite concerned about a Florida preacher who is threatening to burn Qurans on 9/11--such a stupid and hateful act could spark a violent reaction among Muslims around the world. Which is exactly what Islamophobes would like to see happen, so they can say: "See how violent and terrible Muslims are!"

My Quaker Meeting in Santa Monica plans to host a time of worship sharing and reflection on Saturday, 9/11, at 7:00 PM so we can have some healing. Sadly, as a nation, we did not make time to heal after 9/11; instead, we rushed into futile wars and ended up causing millions of Muslims to lose their homes, and hundred of thousands to lose their lives. America has also suffered grievous loss since it embarked upon this disastrous course action--the loss not only of American lives, but also of many American souls.

Kathleen believed deeply, as I do, that war is not the answer. War can only destroy lives--it cannot resolve conflict or bring justice and healing. The answer is to take seriously the teachings of Jesus, and of the prophets (including Prophet Mohammad), and to treat others as we would wish to be treated, with respect and love. If this were the basis of our foreign policy, as well as of our daily lives, the world would be a much more secure and friendly place.

Methodist Pastor Observes Ramadan Fast, Prays with Muslim Community for Peace on Earth
(an article that appeared in Circuit West, the Methodist newspaper)
Dec. 8, 2002: Rev. Kathleen Ross, pastor of the Walteria United Methodist Church in Torrance, California, decided that she would observe the Ramadan fast. From Nov. 6-Dec. 6, she neither ate food nor drank any liquid during the daylight hours.

“The best part of Ramadan were the times we broke fast with our Muslim friends,” she said. “It was a great opportunity to get better acquainted with a culture and a religious tradition that I had not had much first-hand experience with. After September 11th, it seemed very important to show Muslims that Christians respect their faith.”

This September Rev. Ross and her husband Anthony Manousos led an interfaith curriculum developed by the California Council of Churches. They invited local Muslims, Hindus, Buddhists, Jews, and Orthodox Christians to share their faith journey with members of their Methodist congregation.

“During these times of religious strife and misunderstanding, we feel that it is important to build bridges between people of different religious traditions,” explained Pastor Ross. “Methodists have been on the forefront of interfaith work. We are a very diverse group (Methodist preachers in the Long Beach area preach in over forty languages on a given Sunday) and we believe in celebrating diversity!”

Rev. Ross decided to observe the Ramadan fast in part because her husband Anthony (a Quaker) was also doing so. When he had observed the Ramadan fast after September 11th, many Muslims were surprised that a non-Mulsim had enough self-control to fast.

“Fasting used to be an important part of our Christian faith,” explained Pastor Ross, “but many of us Christians have become too self-indulgent to give up our addiction to food. That’s why I wanted to try fasting during Ramadan. It wasn’t easy, especially the getting up before dawn part and not drinking any liquids. Fasting not only teaches self-control, it also helps us to experience what it is like to be poor and hungry and thirty—the condition of the majority of the world’s people.”

During the last week of Ramadan, members of Rev. Ross’s church accompanied her to the South Bay Islamic Center in Lomita, where they were graciously welcomed. Each evening of Ramadan, mosques provide food for those who come to break fast and worship together. It is a powerful bonding experience.

On Eid, the final day of Ramadan, Rev. Ross and her husband joined several thousand other Mulsims at the LA Convention for closing prayers. Afterwards, they broke fast with a Muslim family from Kashmir.

“Eid is a lot like our Christmas,” said Rev. Ross. “Gifts are exchanged, and everyone acknowledges their gratitude to God. Because Ramadan has not been commercialized like Christmas, it is easier to remember that this is a religious celebration, a time to affirm God’s presence in our midst. It is often hard for Christians to reclaim Christmas from our consumer culture.”

Rev. Ross concluded: “Observing Ramadan has been a very important learning experience, and I am still trying to figure out how to apply some of its lessons to my own faith as a Christian. At the mosque I learned that many Muslims memorize the entire Qur’an word for word in Arabic. At the Islamic Center of South Bay, even a teenager had memorized the entire Qur’an! It’s hard to get Christians to memorized verses from the Bible, never mind the entire Gospels! We Christians need to take our Bible as least as seriously as the Muslims take the Qur’an. And we need to re-claim some of our traditions of fasting and prayer. I think that learning more about other faiths can help us to become better Christians as well as become more tolerant and respectful.”
Posted by LA Quaker at 9:11 AM