How I converted my cat to Quakerism.... 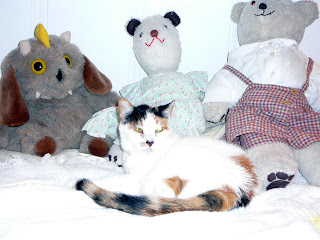 My 20-year-old cat Xenia had become a convinced Friend during the first 16 years she resided with us. By this I mean she learned how to get what she wanted nonviolently and quietly. For example, if her food dish were empty, Xenia would stand by it and stare at me reproachfully. This was her way of "eldering" me. She hardly ever meowed. She didn't need to. Her silence was an irresistible force.

But when my wife was ill, we had to leave Xenia with a Quaker family who indulged Xenia beyond what was good for her Quaker soul. She was given canned cat food, which affected her like alcohol and caused her to become addicted. When Xenia finally returned to me, she was a changed cat. She was loud, demanding, and utterly impossible to live with. She was no longer a Friend; she was a fiend.

I realized the extent of my cat's fiendish nature when I left her with a woman who offered to be a cat sitter. This Friend, whose name was Suzie, was simply supposed to feed Xenia and change her kitty litter. Suzie had addictive tendencies, however--she was in AA--and Xenia learned how to make Suzie do her bidding. When I returned home, Suzie had moved into my apartment and was sleeping with Xenia. And there were not one, but two bowls of cat food on my bed. That's when I realized Xenia had turned Suzie into her slave!

It took many months for me to enable Xenia regain her Quaker composure. I understand the nature of cats pretty well, being of a feline disposition myself. Cats are strong-willed,  independent creatures who must be treated with great deference. But they also are highly emotional and crave affection. To train them, you must love them. A lot.

So whenever Xenia would meow loudly for canned catfood, I would pick her up very gently and say in a quiet voice, "Every time you make noise, I am putting you into the 'meow-meow' room."

The 'meow-meow' room was the bathroom--the only room my little apartment with a door I could close. In this room were all the necessities of life for a cat: food, water and the kitty  litter box. But once the door closed, Xenia was in total darkness. Sometimes she would whimper pathetically, but soon she fell asleep. I usually released her after half an hour or so. It was hardly onerous punishment, just a reminder that crying doesn't pay.

I did this consistently for several months, although once or twice I made the mistake of giving her canned catfood and her addictive behavior returned. This taught me the importance of being consistent and feeding her only what is good for her soul.

Besides dry cat food, I fed her with lots of sweet talk and petting, which she craves even more than canned cat food. Gradually her craving for canned catfood abated, and so did her meowing. Now, when her food dish is empty, she stares at me reproachfully, but also with longing, as if to say, "Can't you see your sweet adorable cat is hungry? When are you going to feed irresistible me?"

At night, Xenia has become increasingly affectionate. During her fiendish days, she slept at the foot of my bed, snoring, but now she sleeps next to my pillow, purring. When I cradle her under my arm, she purrs in ecstasy and I confess, so do I. During the night, when I awaken, I give her a little petting and she resumes her ecstatic purring. We both have sweet dreams.

It is clear that tough love is what cats need if they are going to become convinced Friends.

One more cat story, this time about a Bengal tiger, which is, after all, just a very big pussy cat.

I once saw a documentary about a woman who tames Bengal tigers, who have been known to eat a man when they were too old to hunt more challenging game. These tigers range in weight from 300-500 pounds and can gobble a medium-sized child for breakfast.

This Bengal tiger tamer was a petite woman who weighed perhaps 120 bounds. Even a female Bengal tiger weighs twice as much as she did.

So I asked teenagers and others: How did this little woman tame these big, ferocious beasts?

People usually responded: "Through intimidation?" But clearly this answer made no sense: nothing this little woman could do would intimidate a Bengal tiger, which have been known to kill elephants. In fact, if you make a Bengal tiger testy, watch out!

Only rarely did anyone guess the answer this woman gave when an interviewer asked how she managed to make these tigers do her bidding.

The way she showed her love was through action. She is the first person to greet them in the morning, and the last to say goodnight. She feeds them and cares for them, and they know she is loving as well as fearless. Perfect love drives out fear, as Jesus pointed out. And perfect Love is the strongest force on the planet.

If Love can tame tigers, or kitty cats, why not humans, the planet's most dangerous predator? (Far more dangerous than the tiger, or even the shark, which kills fewer than a dozen human per year while humans kill several million sharks.)

The Love that tames tigers, and transforms humans, is not romantic or sentimental love, but deep, committed bonding--the kind of love that truly understands and appreciates the Other. Such love transforms both the lover and the beloved.

Such is the love that has enabled my cat Xenia and me to honor "that of God" in each other and behave like true Friends. For this gift of Love, I thank my Creator and hers.
Posted by LA Quaker at 7:28 PM