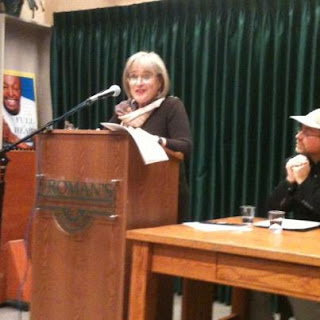 Over seventy people showed up for a book signing at Vroman's Bookstore by Jill Shook (my wife and author of "Making Housing Happen: Faith-based Affordable Housing Models") and Bert Newton (author of "Subversive Wisdom: sociopolitical dimensions of the Gospel of John"). There were so many people that a number of them had to stand!

Vroman's is the oldest and most prestigious bookstore in Pasadena, and is known nation-wide. Best-selling authors and notables like Jimmy Carter and most recently, Sonia Sotomajor have given book signings at Vroman's. So my wife was in very good company!

Bert and Jill have worked together for many years--organizing the yearly Palm Sunday Peace Parade (where Jill and I met), going to City Council meetings to speak out about affordable housing and other issues affecting the marginalized and low-income folk, etc. They also collaborated on a chapter in Jill's book entitled "Ownership, Land and Jubilee Justice," which provides a biblical rationale for land redistribution, debt forgiveness, and economic justice for the poor, landless and homeless. Jill and Bert each took turns speaking for about 5 minutes each, interweaving theology and practical solutions to the current housing crisis.

People loved what Bert and Jill shared, and purchased 21 copies of her book! She signed many of her books: "Let's make housing happen!"

Pat O'Reilly, executive director of ECPAC (Ecumenical Council of Pasadena), invited Jill to give a 15-minute inspirational talk at ECPAC's annual dinner in which religious leaders from throughout Pasadena take part. This is a golden opportunity for Jill to share her message of hope based on a gospel vision of housing justice for all....

If you missed this book signing, not to worry. There will be another one here in Pasadena on Saturday, Feb 9, at 4 PM at the Archive Bookstore, 396 E Washington Blvd, Pasadena CA 91104. This is the largest religious bookstore in the area, with over 75,000 used and new theological books, so it is well worth a visit. See http://www.archivescalifornia.com/


I’ve had the joy of helping several people save their homes from foreclosure here in Pasadena. I totally admire the work of Rose Gudiel, whom I feature briefly in my book. She saved her home and has helped many others to save theirs. In many ways she exemplifies subversive wisdom. Like those I have helped and thousands of others, she attempted over and over to get a home loan modification to no avail, even though she qualified. Despite hundreds of calls, completed forms turned in on time, the banks would consistently lose the paperwork, say they would incomplete, and start the process over again…

To finally get the attention of Indymac, which is now One West here on Colorado and Lake, clergy and other brave folks stood in the bank and refused to go, like Jesus the rule-breaker and liberator. Like Jesus who overturned the money tables in the temple, they did a public action that finally got the attention of the bank. They stayed until they finally had dialogue with the bank about modifying her loan.

The churches of Hawaii also saw the need for this face-to-face dialogue. In fact, the churches got together and passed a law called Face-to-Face. Simply by requiring that bank personnel sit down with someone facing a foreclosure and have a face-to-face conversation, they cut their foreclosure rate in half!

One-on-one conversation can be “subversive” …that is how the churches initially in Brooklyn, then in South Bronx in NY began organizing their community, with one-on-one conversations. After hundreds of people shared their concerns and stories with each other, people realized they had internalized what the movies and outsiders were saying about the horrors of South Bronx and Brooklyn.

By listening to each other they began to view the burned out properties in their community as an asset and each other as an asset. They gained enough relational power though thousands of one-on-one conversations to have the audacity go to the city and ask for the land. The city believed in them and gave them the land!

To date, the churches of Brooklyn and South Bronx have built 5,000 units of for-sale affordable housing using the Nehemiah Housing Strategy. By infusing the pride of home ownership back into their communities, they began to break the downward cycle of poverty, and the crime rate plummeted. Nehemiah in the Bible was a master organizer and community developer.

Chapter in my book that tells about this, focuses on the churches of South Bronx which built 1000 of these 5000 homes. When my husband Anthony was reviewing this chapter for this Revised Version Making Housing Happen, he felt it was too fairy tale; too good to be true. So we found articles in the NY Time and from NPR, telling how the Nehemiah homes have been “a bulwark of stability in neighborhoods devastated by arson and neglect… especially during the mortgage crisis.” To date not one low-income family in South Bronx has defaulted on their loan—not one foreclosure among the 1,000 Nehemiah homes built by the churches of South Bronx. Now that is good news to the poor!

To double check I called the office president of the borough of South Bronx to see what he thought of the Nehemiah Homes built by the churches. Wilhelm Ronda explained that the investment of the churches, at a time when no one would touch this community, has turned the community around. South Bronx now attracts businesses that invest in this community. Sarah Plowden, one of the home owner said, “We more than just bought homes, we bought into each other as a people.”

Other chapters in my book have focused on a similar kind of subversive wisdom—a living out of the kingdom of God here and now. You can go to the corner of Union and 8th in downtown LA and can see for yourself a beautiful building, once so gang infested and dilapidated that floors were falling into each other. Through a small Bible Study the residents began to dream and feel empowered, eventually bringing lawsuits against the negligent landlord. The landlord eventually gave up the building and these low-income immigrant residents became the owners. They partnered with the city of LA and Low income Housing tax credits. Today this building, that was once an eyesore, stands as a beautiful monument of God’s love and grace, full of hope and dreams. Rather than turning to gangs, the youth now graduate from college and dream of bright futures.


Organized people that creates power for justice is the power of non-violence, a demonstration of God’s love and power to create beauty and hope.
[Jill concluded with practical ways to help in this work.]
Right now we are helping a family in Monrovia to save their home. There’s a Greater Pasadena Affordable Housing Group that you can join. We are working on local policies. Additionally, I’m involved with family Promise, where homeless families are housed in churches, synagogues or mosques for a week then move within a rotation of 14 congregations. During the day they are at a resource center with a full time director who helps them to find jobs and housing. 176 of these networks exist nationwide. We are blessed to have one in San Gabriel Valley. But we need you help.

Bert is again planning the Palm Sunday Peace Parade, celebrating the Prince of Peace… If you are interested in exploring any of these ways to get involved and to help make housing happen, please contact me at
jill@makinghousinghappen.com
To order her book, go to
https://wipfandstock.com/store/Making_Housing_Happen_2nd_Edition_FaithBased_Affordable_Housing_Models
To read her article in Sojourners magazine, go to