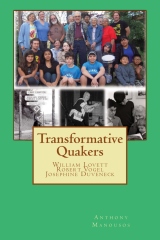 I am pleased that my latest book, Transformative Quakers, is now available online. It consists of biographies of three remarkable California Quakers--William Lovett, Robert Vogel, and Josephine Duveneck--who made a difference in the world, working for peace, helping the poor, and caring for children and youth.You can order this book through Amazon. https://www.createspace.com/4832073

The book is an outgrowth of a series of lectures called “Transformative Friends” that was started by Brian Vura-Weis at Pacific Yearly Meeting (PYM). Over the years, Transformative Friends lectures have focused on notable Quakers such as William Penn, Elizabeth Fry, John Greenleaf Whittier, Thomas Kelly and Howard Brinton. This booklet focuses on Quakers closer to home.


In 2013, Pacific Yearly Meeting established a “Bob Vogel Fund” to help fund youth projects. This fund came from the Pacific Friends Outreach Society (PFOS), of which Bill Lovett was a founding member. It therefore seemed appropriate to honor these two Friends who cared deeply about young people and Quaker education. Josephine Duveneck also cared deeply about young people and organized many youth activities at Hidden Villa Ranch in Palo Alto. It seemed fitting to include her in this volume, especially since Quakers from the very beginning have recognized the importance of women called to prophetic ministry. Peace and justice cannot be achieved without men and women at all levels of society working together.


Bill Lovett has been a beloved and respected member of the Pacific Yearly Meeting since coming to California with his family in 1965. A birth-right Friend whose family became Quakers in the time of William Penn, Bill was born in 1923 in Fallsington, a small rural Quaker community in Pennsylvania not far from the Delaware River. He has been a passionate pacifist all his life and served time in prison during World War II because of his uncompromising commitment to conscientious objection. Bill refused to seek CO status as a Quaker because he wanted CO status to be extended to non-religious people of conscience.  Bill became involved in helping low-income farmworkers in the Central Valley build affordable homes through Self-Help Enterprises, a precursor to Habitat for Humanity. He and his wife Beth helped to found Visalia Meeting and built its beautiful meetinghouse in a lot near their farm. In the latter years of his life, Bill became involved in efforts to establish a permanent site where Pacific Yearly Meeting could hold its annual session. This cause attracted many young Friends who became acquainted with the Lovetts through Quaker Oaks farm. When the permanent site project was no longer deemed feasible, its funds were turned over to PYM to be used for its fledgling Youth Service Program.


I came to know Bill through the Youth Service Program that I helped to start for Southern California Quarterly Meeting and the American Friends Service Committee (AFSC). In 1994, I took a youth group to the Central Valley to do a project with Self-Help Enterprises and we stayed at the Visalia Meetinghouse. There Bill shared with us his amazing story, much to the delight of our young volunteers. I must add that when my wife Jill heard Bill’s story at a PYM gathering, she was so impressed she insisted we stop off in Visalia and record it. The afternoon we spent with the Lovetts at Quaker Oaks Farm was not only an unforgettable experience, it was also the genesis of this booklet!


Like Bill, Robert Vogel (1917-1998) was a conscientious objector during WW II. Born in Rochester, NY, Bob became a Quaker during grad school and spent three years in a Civilian Public Service (CPS) camp rather than join the military. There he began working for the AFSC—an organization that he served faithfully for over forty years. Bob moved to Pasadena with his wife Etta and lived there for the rest of his life. During his years as AFSC staff, he worked on peace education and traveled through the world visiting and supporting Quaker work in China, Japan, Africa, the Middle East, Latin America and the Soviet Union—as well as visiting Friends throughout the United States. He built bridges not only with America’s “enemies,” but also between different branches of Quakers: he was a true ambassador for peace. He also worked on local issues, moving into a low-income, multicultural area of Pasadena, serving on the Pasadena Healthy Start Program, the LA County Children’s Planning Council, and the ACLU. In addition, he and his wife raised a family of four children: Janice, David, Jonathan, and Russell. Jonathan Vogel-Borne followed in his father’s footsteps, worked for the Friends Meeting in Cambridge, served for many years as yearly meeting secretary of New England Yearly Meeting, and is currently giving the keynote address at Pacific Yearly Meeting’s 2014 annual session. Thanks to Jonathan, I was given permission to publish excerpts from Bob’s unpublished memoir in this booklet.


I first became acquainted with Bob when I moved to California and had scruples about signing a loyalty oath after landing a teaching position at El Camino College in 1989. He gave the support and materials I needed to explain to the dean why, as a Quaker, I could not sign such an oath in good conscience. As I came to know Bob, my respect and admiration for him grew. My most memorable experience occurred when I was helping to start the youth program in Southern California. During a somewhat contentious meeting, Bob calmly stood up and spoke with deep feeling about the need to support youth programs. As he spoke, he put his hands on my shoulders and I felt a surge of energy course through my body that I can only describe as the Holy Spirit. At that moment I felt confident that the youth program would be approved and succeed, and it did. I knew that Bob was truly a man in touch with the Spirit, as his life and writings clearly testify.


Josephine Duveneck (1891-1978) came from a well-to-do Boston family and had a deep concern for social justice, peace and young people. In a memorial address (July 8, 1978) Paul Seaver, a history professor at Stanford University, wrote: “Josephine Duveneck joined Palo Alto Meeting in 1937 and on several occasions served as Clerk of Meeting for a total of nine years. She was largely responsible for the fact that our present meeting house is located in one of the few interracial neighborhoods in Palo Alto. Her contributions to Friends’ concerns were manifold and manifest: let me just mention her work with Japanese Americans, interned during World War II, and with Native Americans, which led to the Indian Program of the AFSC’s Northern California office...” Seaver goes on to point out that many of the children of Palo Alto Meeting spent time during the formative years at Hidden Villa, a ranch that the Duvenecks turned into a summer camp and retreat center. As the Los Altos Historical Society notes, “Hidden Villa became a center for social, educational, environmental, and humanitarian activities. In summer it was a youth camp, to which the Duvenecks brought minority and disadvantaged children, and minority counselors, which given the mostly white demographics of the San Francisco Peninsula, was particularly unusual and innovative. It had the first youth hostel on the Pacific Slope. World War II refugees and Japanese-American victims of the World War II ‘relocation’—internment—were released to Hidden Villa. Gatherings included church outings, interracial parties, and fundraisings. Minority groups were welcome. The hostel accommodated a Moslem group which met to instruct children in Moslem faith and rituals. Native Americans met for dancing and feasts.”


I read Josephine’s spiritual autobiography just prior to becoming editor of Friends Bulletin in 1996, and it was a profoundly moving experience. I felt led to write something about Josephine so I toured Hidden Villa with her daughter Elizabeth Duveneck Dana. Exploring this ranch was an unforgettable experience. In Hidden Villa Josephine’s spirit lives on, in its natural habitat: the California landscape, with its cattle and rolling hills and trails winding through bay laurel, live oak and chapparal—the land virtually untouched from the days it was inhabited by the Ohlone Indians.  I am glad I finally have an opportunity to lift up the example of a Quaker who loved the land, and loved people,  and found a balance between activism and spirituality. As Paul Seaver wrote, “As long as [Josephine’s] memory remains green among us, we will possess an enlarged vision of the potentialities of our common humanity and of the work God calls us to do in our time.”


Peace, justice and young people—these are the concerns that link these three Transformative Friends. May their lives inspire and challenge us to be transformed, and to transform others, through the Spirit of Love and Truth.


At the end of this booklet is a section containing “queries”—open-ended questions—designed to help you think more deeply about the lessons you can learn from the lives of these Friends. I hope you will share this booklet with others, start study groups, and reflect upon important queries, such as, What are you being called to do with your life? What inspires you to make a difference in the world? What brings you deep and lasting joy? How is your life speaking?


“Be patterns, be examples in all countries, places, islands, nations wherever you come; that your carriage and life may preach among all sorts of people, and to them; then you will come to walk cheerfully over the world, answering that of God in everyone; whereby in them you may be a blessing, and make the witness of God in them to bless you.” –George Fox, 1656.