Wishing you a wonderful life for 2016!

Jill and I want to wish you all the best during this holiday season and a wonderful life for 2016! We're posting our Christmas letter so you can have glimpses of how God has been at work in our lives and hopefully be inspired and encouraged. We'd love to hear back from you! 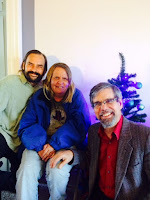 Anthony's reflection: I feel deeply grateful to God, to Jill, and to all my friends and family for another wonderful year, doing things I love with people I love: writing, traveling in the ministry to Mexico, being certified as a spiritual director, and working for justice and peace.  What fills my heart with special joy this Christmas season is that our homeless friends Melissa and Shaun are finally housed--after over 12 years of living on the street and in a cheap motel, and 7 years of waiting for a Section 8 housing voucher, and almost a year helping her search for a landlord willing to accept the voucher. Abandoned by an abusive family, Melissa has adopted me as “her father in Christ.” I am overjoyed that my “daughter in Christ” can finally celebrate Christmas in a decent, safe, and affordable apartment, thanks all of our efforts, including the dedicated work of a Korean Church in Gardena and the Walteria UMC church in Torrance who petitioned help from the Mayor of Torrance. Because of his significant role in helping to get Melissa housed, Mayor Patrick Furey was invited to be part of a Christmas celebration at Walteria on Saturday, December 12. There he was publicly thanked and met with Melissa & Shaun, Roy Currence (a Methodist elder who also played a key role in getting Melissa housed), Jill and me. We shared with the Mayor our concerns about the critical need for affordable housing to help address our country’s housing crisis. The Mayor was very sympathetic and has decided to start a commission to address homelessness in Torrance. We’re thrilled by this exciting development!


Jill's reflection and letter to her supporters: This year your support has had a multiplying effect: the NW JobFest and Community Resource Fair on Nov. 21st   attracted over 500 people, many finding jobs, and serving to promote and unite the eighteen businesses and ten churches in a forgotten corner of Pasadena. Fairgoers won discount cards and prizes from these local businesses by attending its forty booths. We have enclosed a Fair registration card so you can get a taste of the Fair—free dress shirts for the job applicants (offered by Tyron Hampton, the city council rep), free haircuts, free hotdogs given by the police, a prayer booth with multiple churches praying for fairgoers if they wanted prayer, and tons of family fun!
It was in January, while sitting in our monthly gathering of African American pastors, that God stirred in my heart to help plan this year’s Fair. Little did I know that it would take practically every waking moment—tons of emotional and spiritual energy—not only on my part, but also a huge commitment on the part of Anthony, my supportive husband, plus several part-time assistants and a dedicated team representing seven of the ten churches in our target area. This was not just a job fair, but also an empowerment initiative, with a goal both to employ  this underemployed community as well as to tap often overlooked leaders and assets in a blighted community--to create hope and resurrection… a glimpse of the kingdom of God on earth amidst broken lives. Because this community was once a thriving African American professional business disrict, our theme verse is:

Your people will rebuild the ancient ruins and will raise up the age-old foundations; you will be called Repairer of Broken Walls, Restorer of Streets with Dwellings.” Isaiah 58:12,

In Phase 1, from April to July several of the ten churches in our target geographic hosted survey orientations. We talked with 150 of the residents, business owners and more, asking them about their dreams and concerns for the area…and if they wanted to help plan the Fair. In Phase II, the planning team that emerged met fifteen times at New Hope Church, on N. Fair Oaks—around the corner from Tremont, the street we closed to host the Fair. This demonstrated our commitment to restore “streets of hope.”
We are now launching Phase III, with a passionate team committed to addressing common concerns—slowing traffic, curbing crime, creating more parking—and strengthening the businesses, our staff, more technical support and the relational network needed for this work.

January and February: Completed Jill's book Justicia y Vivienda. Another book “baby” is born!
March: Mexico City for a gathering of Quaker religious leaders called Friends World
Committee for Consultation and an immigration fieldtrip at Casa de Los Amigos. What a joy to connect with un-programmed and Evangelical Friends throughout Latin America!
May: Anthony graduated from the Stillpoint, with a certificate in spiritual direction. We hosted ReconciliAsian, with a focus on creation care, giving tours of our “green” home.
June: Anthony completed the second editions of Transformative Friends and his sci-fi novel Relics of America and
continues to serve as clerk of Pacific Yearly Meeting Peace Committee.
Jill gave two day-long retreats on housing justice for Habitat for Humanity Colorado and for pastors and city leaders in Broomfield, CO. She returns in February.
July: Jamaal Dominique Hopkin lectured on the “Dead Sea Scrolls and the untold story of Africans in the Bible.” This church outreach, with a Mustard Seed matching grant yielded $3,000 for the NW Jobfest. With your help, plus sixteen $100 Gold Sponsors from N. Fair Oaks churches and business, and $5,000 given by the city of Pasadena, over $15,000 was raised for the Fair!!
Jill “escaped” with her mom, Donna, to Santa Fe, NM. They had a blast staying in an adobe guest house (built in 1850) at the Quaker Meeting house, and visiting tons of inspiring art galleries.
August: We spent a week in San Diego for Bible study and spiritual renewal at a monastery, saw cousins and friends, & sailed on the Golden Rule, refurbished by Veterans for Peace!
September: We celebrated our fourth anniversary at the Riviera Motel in Malibu, one of our favorite dumpy and funky places. We renewed our wedding vows at Getty Villa, where Anthony first proposed to Jill.
October: Anthony attended the Parliament of the World's Religions in Salt Lake City with 10,000 religious leaders.
November: While Anthony attended the Friends Committee on National Legislation Quaker Lobby Day in Washington, D.C. (a spiritual highlight!), Jill attended the Christian Community Development Conference in Memphis, TN, co-leading two affordable housing workshops. 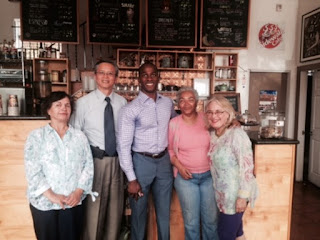