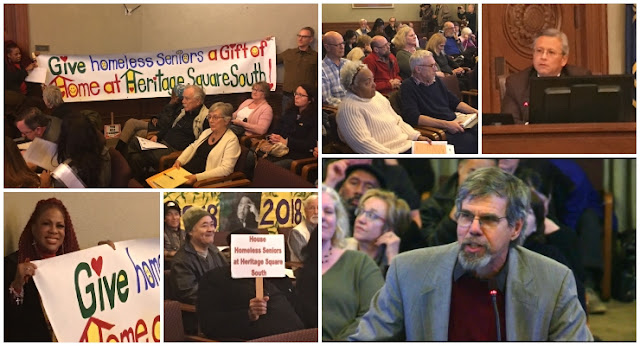 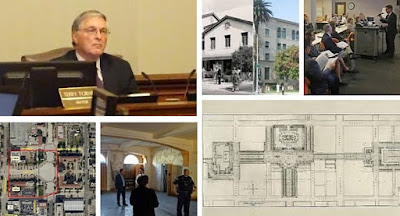 An amazing moral victory took place at City Hall last night: the Pasadena City Council voted unanimously for homeless housing (plus commercial development) at Heritage Square South! In addition, the Mayor surprised everyone by announcing his support for using the vacant YWCA near City Hall (designed by famed architect Julia Morgan) for homeless housing. (This property has been considered for a boutique hotel, but this deal fell through.) Other Councilmembers expressed strong support for converting motels to homeless housing in every district and urged every City Councilmember to work with their constituents to make this happen. It was clear that our City Council is seriously committed to addressing the homelessness crisis in our city.
You  can read more about this at Pasadena Now: Heritage Square South and Julia Morgan YWCA.
The City Council received a lot of encouragement for its action. It received over 400 letters from constituents calling for homeless housing at Heritage Square South. Over 30 advocates showed up at this meeting with signs, banners and talking points. When the Council made its intention to support homeless housing clear, we were thrilled. Instead of giving our talking points, we took turns thanking the City Council members. We also gave each of them the Poverty and Justice Bible, which highlights in bold orange passages relating to social justice. This Bible, produced by World Vision, contains a prophetic foreword by Rev. James Lawson, the colleague of Dr. King who teaches nonviolent resistance.  We also gave the Mayor a copy of Rabbi Waskow’s Freedom Journeys. We want the Council to be clear that we are a faith-rooted effort, committed to the moral imperative of housing our homeless neighbors.
I want to thank all those who came to the City Council meeting, as well as those who signed letters and took part in our vigils and other actions. Special thanks to the religious leaders who were present and spoke: Mike Kinman, Connie Milsop, Brita Pinkston, John Stewart, and Rabbi Joshua Grater. Thanks also to homeless service providers: Annie Miskey, Barbara Bowman and Bert Newton.
We were also grateful to two homeless residents who spoke: Max and Crayton. One had been homeless for 20 years, and the other was recently housed in permanent supportive housing. Their testimonies were powerful.
We have worked for ten months on this campaign and it has produced many good fruits. We have reached out to our elected officials and encouraged them to do the right thing. We have created a beloved community of advocates committed to the beautiful struggle for affordable and homeless housing in our city. We have the support of religious leaders, homeless service providers, people of conscience, and concerned citizens.
This is just the beginning.
GPAHG’s goal is to reduce the homeless population by at least 50% in the next five years. This is not unrealistic. Between 2010-2015, the city reduced its homeless count by over 50% by producing homeless housing. We can do this again, with God’s help and the support of our beloved community!
Now that the Council has authorized how it wants this property to be used, the Housing Department can begin to make plans to find a developer willing to undertake this project. The Housing Director responded to the following important questions:
1)                  How long will it take for this project to “break ground”? Approx. 1 ½ to 2 years.
2)                  How much will it cost? $30 million.
3)                  Where will the funding come from? Approximately $14 million will come from state and county sources, the rest from 4% low-income tax credits (a federal program used by affordable housing developers).
4)                  How much will come from the City’s general fund? Zero.

What next? GPAHG is committed to working with churches, community leaders and concerned citizens in East Pasadena (as well as other parts of the city) to address our homeless crisis through homeless housing. For the past month we have been meeting on a weekly basis in East Pasadena and will be organizing small group meetings over the next six months or so to hear the community’s concerns and to share information about best practices to address homelessness. We intend to partner with LA Voice, United Way, and Faith Partnership to End Homelessness in this educational effort.
Our special thanks to came to the City Council meeting to speak or offer support: Tom Petersmeyer, Divine Johnson, Faithanne Truong, Donna Sider, George Patton, Brita Pinkston, Aretta and Russ Crowell, Michelle White, Bertha Downs, John Stewart, Una Jost, Lorynne Young, Bert Newton, Debra Francis (who made a beautiful banner), Peter Hartgens, Anthony Manousos, Barbara Bowman, Anne Miskey, Jill Shook, Mike Kinman, Allison Henry, Connie Milsop, Rabbi Joshua Grater, Juliana Serrano, Georgia Daniels.
We also want to thank those who wrote letters to the City Council.
Your efforts made a huge difference!

If you'd like to contribute, there aretwo ways: On line: https://makinghousinghappen.wedid.it/

Or send checks made out to “Social Good Fund” with “Making Housing and Community Happen” in memo line and send to: