There is a growing consensus among religious leaders in Pasadena that the City Council should approve homeless housing at Heritage Square South. This parcel of land on the corner of Fair Oaks and Orange Grove was purchased by the City for affordable housing fifteen years ago. For political reasons, it has been left vacant, except for leasing part of it to Church’s Chicken.
Because the city is facing a growing homelessness crisis, with the number of homeless seniors increasing by 65% in the past three years, many members of the religious community in Pasadena are calling on the City Council to take immediate action and use this “affordable housing asset” to build urgently needed permanent supportive housing. Two prayer vigils have taken place on this site. The first vigil took place on March 11 and drew around 30 people, including Pastor Jerred McDaniels. See March 11 prayer vigil


The interfaith vigil that took place at Heritage Square South on Friday, June 8, drew 50-60 people, including religious leaders, activists and our homeless neighbors. It began with Rev. Dr. Larry Campbell leading us in a moving prayer and ended with Muslim attorney Tarek Shawky chanting the Muslim call to prayer in Arabic as the sun set.
Around a dozen people spoke, including Mel Tillekeratne, an activist with an LA group called “Shedoes.” This group helps house homeless women and stands in solidarity with groups throughout the LA area that are seeking to create homeless housing.
After our time of prayer and reflection, we had a shared meal with our homeless neighbors at Church’s Chicken.
Seven of us slept overnight on the sidewalk on Fair Oaks to be in solidarity with our homeless neighbors, some of whom joined us. We posted a banner on the fence that said: “House our Homeless Neighbors” –Isaiah 58:7-- on Heritage Square South.” We tried our best to sleep but it wasn’t easy with traffic roaring by at 50 mph and firetrucks barreling by every hour or two.
Even though it wasn’t very comfortable sleeping outdoors, we were better off than our homeless 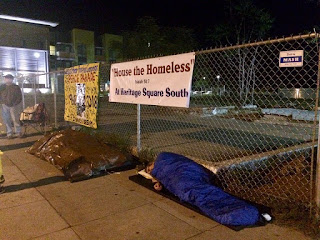 neighbors. That’s why my Muslim brother Tarek gave away his lounge chair and I gave my sleeping bag and mat to an elderly African American woman who had only a thread-bare blanket to sleep on.

The list of religious leaders in Pasadena who took part in the June 8th vigil and support homeless housing on this site includes:

Other leaders who wanted to attend but sent regrets include: Jonathan Klein of CLUE and his wife Tera Klein of Throop Church; Pastor Terry Turrentine of the Deliverance Tabernacle Church of God in Christ; Rev. Mathew Coldwell of Knox Presbyterian Church; Dan Davison, pastor of Rose City Church; Pastor Kerwin Manning of the Pasadena Church; and Rabbi Joshua Grater of Friends In Deed. Other religious leaders who took part in our meetings include Rev William Turner and Pastor John Stuart.
The Interdenominational Ministerial Alliance (IMA), the oldest association of African American pastors in Pasadena, is calling on the City Council to house our homeless neighbors on Heritage Square South. Orange Grove Quaker Meeting, of which I am a member, unanimously approved the following statement to be sent to the City Council:

Orange Grove Quaker Meeting of the Religious Society of Friends urges the Pasadena City Council to approve using Heritage Square South to provide permanent supportive housing for homeless seniors. The need to house this vulnerable population is urgent since the number of homeless seniors increased 65% over the past three years, from 153 in 2016 to 253 in 2018. The overall homeless count increased 28% in the past two years, from 530 to 677.[1]  We feel that housing our homeless neighbors is an issue of social justice as well as a moral imperative for our City.

My name is Claire Gorfinkel and I am pleased to bring a Jewish perspective to this interfaith vigil and call for affordable housing for homeless seniors.
As Jews, we are motivated by a deep sense of obligation.  Like Muslims who fast for Ramadan, we do not view our obligations as a burden or a chastisement, but as sacred opportunities which enable us to engage with the divine, with one another and the wider world.
“Welcoming the stranger,” providing shelter and hospitality is one of our most fundamental obligations, as is it for Muslims and Christians, because the central narrative of our people asserts that we too were once homeless wanderers, after having endured generations of thankless labor in Egypt.
Tikkun olam, repairing the world, is another Jewish obligation which we share with our Muslim and Christian colleagues and people of good will throughout the world.  We feel called upon to steadfastly work for justice, in this case to demand that our civic leaders support construction of permanent supportive housing for members of the community who have been marginalized and made to feel unwelcome.
Along with people of all faiths, we recognize that everyone, everyone is made in the image of that which we call God; everyone carries within them a spark of the divine.  Everyone, regardless of race, gender identity, religion, national origin or economic status, is deserving of our respect.  Everyone deserves to be sheltered and fed.  Homeless people are our neighbors and with an unexpected twist of fortune, they might be ourselves or our family members.
Let us commit ourselves to work for affordable housing and to recognize the inherent worth and dignity of those who currently seek shelter.
As Muslims break their fast today and the Jewish Sabbath begins, I would offer this prayer:
Baruch atah Adonai,  Eloheinu melech ha’olam,  asher kid’shanu b’mitzvotav,  l’asok   b’tzor’chei   ha’tzibor.
Blessed are you, Adonai our God, sovereign of the universe, who has sanctified us with obligations, and commanded us to immerse ourselves in the needs of the community.
And let us say, Amen.