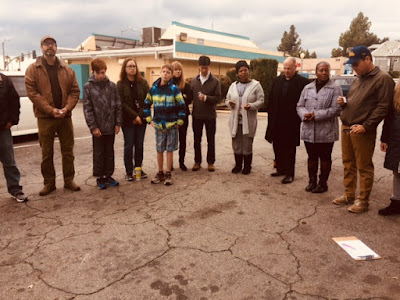 On Sunday, March 11, around thirty people of faith mostly from Northwest Pasadena gathered on the city-owned property known as South Heritage Square. We had learned that Vice Mayor John Kennedy had raised the possibility of using this property for permanent supportive housing for our homeless neighbors, and we  prayed that the City Council  "defend the rights of the poor and needy" (Proverbs 31:8-9) by housing homeless seniors on the land where we stood.

Ours was a diverse group: African American pastors, Latino pastors, and an assortment of neighbors and lay people all deeply committed to social justice and compassion. I was the lone Quaker.

As we formed a circle, Pastor Jared McDaniels and Pastor Marcelo Alvarado as well as others spoke about the importance of housing homeless seniors on this land.

On a cyclone fence we placed a banner with the words of the prophet Isaiah: GIVE SHELTER TO THE HOMELESS (Isaiah 58:7). Ironically, this fence was purchased with taxpayer dollars to keep homeless people from sleeping on this city-owned property. (Rather than sleep on public property, our homeless neighbors are forced to sleep in bushes next to private businesses and in alleys.) 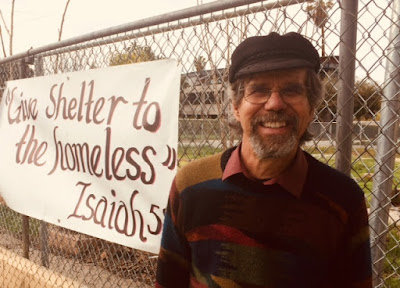 We feel it would be better to house homeless seniors with dignity (as is already happening at North Heritage Square) rather than let them live and die on the streets like animals. God made his intention clear: "let justice roll down like waters, and righteousness like an ever-flowing stream" (Amos 5:24).

We are planning an interfaith prayer vigil and shared meal on this site on Friday, June 8, at 7:00 pm. For more info see https://laquaker.blogspot.com/2018/06/join-us-for-interfaith-prayer-vigil-and.html

During our prayer vigil each person shared biblical passages like these relating to poverty and justice:

A righteous man knows the rights of the poor; a wicked man does not understand such knowledge.

"If your brother becomes poor and cannot maintain himself with you, you shall support him as though he were a stranger and a sojourner, and he shall live with you. 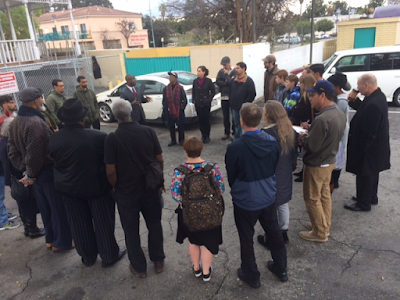 But if anyone has the world's goods and sees his brother in need, yet closes his heart against him, how does God's love abide in him?

The Lord works righteousness and justice for all who are oppressed.

But let justice roll down like waters, and righteousness like an ever-flowing stream.
Posted by LA Quaker at 7:11 PM