Fasting for Peace and Justice: The Peaceable Kingdom and the Interfaith Peace Movement

I am grateful that Marium used one of my favorite quotes from William Penn to announce today’s speaker, Blase Bonpane, who has dedicated his life to interfaith peace and justice work:

"The humble, meek, merciful, just, pious, and devout souls are everywhere of one religion; and when death has taken off the mask, they will know one another, though the liveries they wear here make them strangers." 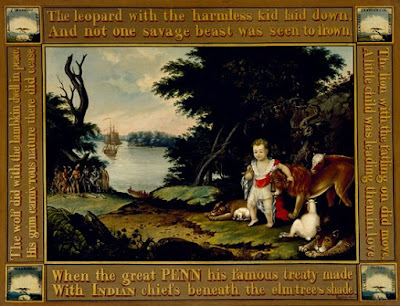 Penn wrote these unifying words in the 17th century, an age of sectarianism and religious wars that killed millions of people throughout Europe. During this tumultuous age of religious violence, Penn became a Quaker and a Christian universalist who did not believe in war. He felt that every person, every religion has some measure of truth and every life is sacred. He had great admiration for indigenous people and negotiated a treaty with them in good faith that was never broken. One of the icons of Quakerism is a series of  paintings by the 19th century American artist Edward Hicks called “Peaceable Kingdom.” It shows Isaiah’s vision of peace in which the lion lies down with the lamb and children hang out with wild aniimals and are not harmed. Behind this idyllic scene you see Penn negotiating a treaty with the Indians. While Quakers don’t have a perfect track record in our treatment of Indians, organizations like the AFSC and FCNL advocate on behalf of indigenous rights. The Peaceable Kingdom is a vision to which Quakerism aspires.

What drew me to Quakerism was the very things that Blase Bonpane advocates in his fascinating autobiography No More Religion. What the world needs is not a religion based on dogma, but a reverence for all life and all people based on compassion and justice.

This creedless faith is what inspired me to become an interfaith Quaker back in 1984 when I became editor of a magazine called Fellowship in Prayer. The founder of this magazine believed that if people of different faiths prayed together for peace, peace would be inevitable. During my stint as editor, I had the privilege of interviewing religious teachers of various faiths: Buddhist, Sufi, Jewish, and many more. I even spent a year living in a Zen Buddhist center, practicing meditation. As a Quaker and a Christian, I felt that I could learn from people of different faiths since every faith has something of value to offer. As a result, my spiritual horizons broadened  and I was able to see beyond the confines of my Quaker community.

This openness is what led me to the interfaith peace movement after 9/11. I was working on a book called Compassionate Listening when I heard the news about the tragic attack on the Twin Towers in New York. In the aftermath of that tragedy, I saw flags flying everywhere and our country heading towards what Gore Vidal ironically called “perpetual war for perpetual peace.”  Feeling anxious and afraid, I turned to prayer and sought divine guidance. The word that came to me was “Perfect love drives out fear.” I was led to fast during the month of Ramadan and get to know my Muslim neighbors. This was a life-changing experience.

Because I was fasting and showed respect for Islam by reading the Quran, I was warmly received by my Muslim neighbors and invited to their homes for iftars. Prior to 9/11, I didn’t know any Muslims, but thanks to my Ramadan fast, I acquired many Muslim friends. I started attending interfaith events and was deeply impressed by the people I met—people of diverse faiths who cared deeply about justice and peace.

I began writing pamphlets and articles and even a book about interfaith peacemaking.  A dozen years ago I was led to Interfaith Communities United for Justice and Peace, which has become my second spiritual home, along with my Quaker meeting. I am infinitely grateful to be part of this beloved community of peace and justice activists.

This is my 17th year fasting during the month of Ramadan and it has become a very important spiritual practice for me.  I feel that in many ways fasting and being part of the interfaith peace movement has clarified and deepened my faith as a Quaker and a Christian. Over the years, my understanding of this practice has evolved and my rationale for fasting has expanded. I find that fasting helps me to grow closer to God by making God a priority more important than sleep or food. I also find that fasting makes me feel closer to less fortunate neighbors. I “hunger and thirst for justice” in a visceral way during my time of fasting.

This year, Ramadan coincides with the Poor People’s Campaign, and I have felt led to organize a campaign in Pasadena to persuade the City Council to support building permanent supportive housing for homeless seniors on city-owned land. This land was purchased with HUD and other funding to be used for affordable housing but the City Council has let it lie vacant for fifteen years, except for leasing part of it to Church’s Church. I am organizing an interfaith prayer vigil and sleep over on this property on Friday, June 8, with help from my Muslim friend Tarek Shawky, whose wife you may know is Edina Lecivic. We are inviting people of diverse faiths to come together to pray and have a meal with our homeless neighbors. Some of us plan to sleep over at this site to be in solidarity with those who have no choice but to sleep on the street and in the bushes. We are urging our City Council to do the right thing and build more permanent supportive housing—the best practice for ending homelessness. Three months ago, we had a prayer vigil on this site and put up a banner that reads: “Shelter the homeless” (Isaiah 58:7). This is something about which all the Abrahamic faiths agree: we have a moral responsibility to show compassion for the poor and make sure they have adequate food and housing.

“Blessed are those who hunger and thirst for justice,” that’s the mantra for my Ramadan fast this year. I feel blessed to be part of a beloved community of people who care deeply about justice and peace, a community that includes people of conscience as well as people of diverse faiths. I’d like to end with the words of a song about George Fox, founder of Quakerism, who wore leather clothes and long hair and wandered about England preaching his message that the Light of God shines in every human being. Here’s the George Fox song that Quakers like to sing: