The Shape of Water: A Spiritual and Biblical Perspective 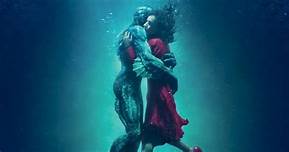 The Shape of Water is a strangely beautiful fantasy drama directed and mostly written by Guillermo Del Toro, a Mexican film maker who won an Academy Award for best director.

The story depicts a mute woman named Elisa Esposito who is abandoned as a baby at the side of a river with her vocal chords severed. Elisa works as a cleaning woman in a laboratory in Baltimore in the early 1960s. Her best friends are Giles, a gay man, and a black co-worker named Zelda Delilah Fuller. The plot centers on Elisa's relationship with a creature from the Amazon jungle that is brought to the lab to be the object of Cold War experimentation. Elisa and this creature end up falling in love, much like beauty and the beast.

This film has many biblical resonances that add depth and meaning to this mythic story. For example, Elisa’s birth is reminiscent of Moses’, who was also abandoned by a river and later became a liberator of his oppressed people. Elisa liberates a creature who is oppressed, and represents indigenous people. Like Elsa, Moses had a speech impediment and needed his brother Aaron to be his spokesperson. Elisa’s spokesperson is her gay friend Giles, who narrates the film.
Some have noted that the creature (also known as the Amphibian or "Asset") can be seen as a Christ figure. Early Christians used the symbol of the fish since the Greek word for fish  'Ichthys" formed an  acrostic: Iesous Christos Theou Yios Soter, i.e. Jesus Christ, Son of God, Savior. 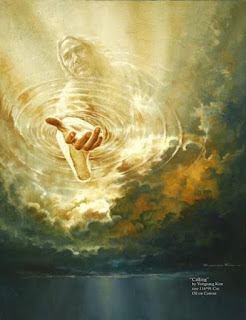 Jesus was associated with water since he was baptized in the River Jordan, referred to himself as Living Water,walked on water, etc. Water is a symbol of transformation, purification, and liberation among Jews. God parted the Red Sea and the Jordan River so that Hebrews could escape oppression and enter the Promised Land. Paul describes baptism as a death and resurrection experience:

"We were therefore buried with him through baptism into death in order that, just as Christ was raised from the dead through the glory of the Father, we too may live a new life." (Romans  6:4).

Water baptism, practiced by immersion in the early church, created a parallel between fish and converts. Second-century theologian Tertullian put it this way: "we, little fishes, after the image of our Ichthys, Jesus Christ, are born in the water."
Another biblical reference is the story of Ruth and Naomi. In the theater below Elisa's apartment, the movie "The Story of Ruth" is playing. This movie was released in 1960 and is based on the biblical story, with Hollywood additions. In the movie Ruth is portrayed as Moabite idolatress who is converted to monotheism by her husband, the son of a Jewish emigre named Naomi. The biblical story is about how Naomi's family is forced to leave their hometown of Bethlehem due to a famine. An economic immigrant, Naomi and her family move to Moab, a place despised by Jews because of its idolatry and checkered history (the Moabites were descendants of Lot, who committed incest with his daughter).
I don't know how much of this story the director Del Toro knew, but certainly he knew that Ruth, a Moabite, became so close to her mother-in-law that she left her own people and embraced the God and culture of Naomi. Ruth returned to Bethlehem, worked on a farm as an impoverished gleaner (much like a Mexican farm worker), but was able to attract the attention of the farm owner Boaz because of her beauty and good character. Because Ruth was a relative through Naomi, she eventually married Boaz and had children by him.
This Moabiite immigrant not only became a Jew, she became the grandmother of King David and is regarded by Christians as the ancestor of Jesus. How could Del Toro not love this amazing story about an immigrant woman whose success had such far-reaching implications? The relationship between Naomi and her Moabite daughter-in-law not only helped them to survive, together they created an ancestral line that transformed the course of history.
This story illustrates the transforming power of relationships between people who come from very different backgrounds. This is also the central theme of Del Toro's movie. A mute woman has a deep, transformative relationship with a gay man. A black and white woman form a deep friendship that redeems their lives. And most significant of all, a human forms a relationship with a creature that is not human, but "amphibian," able to live in the world of water and of air.
The word amphibian literally means having a dual life. This would be an apt description of Jesus the Christ since he had a dual life, fully divine, fully human, Spirit made flesh
This theology of life-giving relationships is contrasted with the theology of the main male character in this movie, Colonel Strickland, the US intelligence officer who prides himself on being "strict" and successful. He has no empathy for others. When he discovers a strange creature in the Amazon that is worshiped as a god by indigenous people, he captures it, tortures it to "tame" it, and finally tries to kill it so it can be dissected and studied for military purposes.
Colonel Strickland's theology is based on the cult of individualism, epitomized in the story of Samson. He sees himself as a lone strong man fighting in a world of enemies, whether they be Russians or women. Women like Delilah are his enemies since they have a will and a voice of their own. Like the creature he calls an "Asset" (i.e. a military resource), women are inferior beings to Strickland. He sees God as made in his image--a privileged white man. In a conversation with the black cleaning lady Zelda Delilah Fuller he says that the creature is not human since humans are made in God's image. "I'm made in God's image," says Strickland. "The creature doesn't look like me. So it's not human." He also notes that Zelda isn't quite made in God's image either, since she is a woman and black.
All the characters in this movie struggle with feeling like isolated individuals in an unfriendly world. But Zelda, Elisa, Giles and the Ambiphian are saved from their isolation through self-sacrificial friendship and love. Strickland ends up totally alone, abandoned even by his father figure, General Hoyt. Like Trump, Hoyt sees the world purely in terms of winners and losers. If Strickland fails in his mission, he is a loser and consigned to the "universe of shit." There is no room in the theology of the domination system for failure. There is no grace.
At one point in the movie, Giles asks Elisa why she is so concerned about the creature since it is not human. This leads Elisa to struggle with the ultimate question, what does it mean to be human? The creature has feelings and can understand language, but is that what makes us human? Finally, Elisa decides to flip the question. She concludes, "I don't know if the creature is human, but I know that if we don't try to save it, we aren't human."
What defines "human" for Elisa is our compassion, our yearning to save and protect those we love. This movie places this love in a context that is deeply spiritual. I don't want to be a spoiler and reveal the ending of this movie, but the final scene leaves us with the same question that we must face at Easter: do we or do we not believe in a power that can transcend death? If we surrender ourselves to the power of love, if we are willing to make the ultimate sacrifice, if we are willing to take the plunge and die to self, as true baptism requires, do we have faith that we will live a "new life" that is eternal? This is the ultimate question, one that this movie leaves it up to us to answer.