The Secret History of Housing, Racism and Cities


This article on " The Secret History of Housing, Racism and Cities" was published in the summer issue of a Quaker publication called "The Western
Friend,"  the official publication of Quakers in the Western USA.  I served as editor of this magazine from 1998-2008 and it was one of the most rewarding experiences of my life. I have partnered with Western Friend to 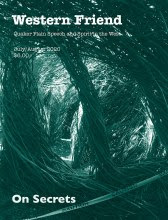 host a webinar called “Loving Your Neighborhood” on Thursday, August 6, at 7 pm. Together we’ll learn what Friends have done, and what we can do now, to address the homelessness and affordable housing crisis during this time of pandemic. This is not the time to hide what we know under a bushel. Let’s proclaim the good news from the rooftops: we know what it takes to end homelessness and poverty. Let’s work together to make ending homelessness and poverty a reality!

Register in advance for this meeting:
https://us02web.zoom.us/meeting/register/tZUqceChrDsuE9ealBspC7ihrOY1Gq1ovthz

After registering, you will receive a confirmation email containing information about joining the meeting.

“Whatever you have said in the dark will be heard in the light, and what you have whispered behind closed doors will be shouted from the housetops for all to hear!” Luke 12:13 (New Living Translation)

WHITE CARD: Congratulations! Your father received a GI Bill, a loan program initiated in 1944. He bought a nice home in the suburbs. This helped your family to do well. (Around 98% of recipients of this loan were white.) Collect $300.

BLACK CARD: After a seven year wait, you receive a Section 8 Housing Voucher enabling you to pay only a third of your income on rent, but unfortunately (like around 50% of recipients of voucher) you can’t find a landlord willing to accept this voucher within the require time limit and you lose your voucher and go back on the waiting list. Forfeit $200.

In 2017, the LA county waiting list for the voucher program was estimated to have an 11-year wait time, and there were about 40,000 Angelenos on the waiting list, which was closed to new names since 2009. The situation has worsened since then. In Pasadena, there are approximately 22,000 people on the waiting list, with 1400 vouchers circulating, 1350 in use, and only 50 available.

WHITE CARD:  You live in a town with very few poor people or people of color. Your property values rise!  Receive $500.

In the 1990s new suburban towns across the US incorporated to prevent low-income Section 8 voucher holders to “encroach.”  These new cities prevented multifamily zoning and ensured large lots sizes. They were typically over 90% white with very low poverty rates. Many LA and Orange County cities were formed for these same reasons.

BLACK CARD: A freeway runs through your neighborhood, your community is destroyed and you lose your home through eminent domain. You aren’t given enough compensation to buy a new home and you become a renter. Forfeit $400.

This is exactly what happened in Pasadena when the 210 Freeway cut through and destroyed a thriving African American business district. Homeowners were not given enough compensation to purchase homes in the city so many were forced to move.
As you play this game, you realize that the real estate game is rigged against people of color. (No surprise if you happen to be a person of color!) Housing injustice is a major reason for the income disparity between whites and blacks. The game helps you to experience what it feels like to be discriminated against, or privileged.
We also teach people how to organize for housing justice using faith-based methods similar to those of FCNL. The secret of good organizing is that we are not just trying to pass good policies and win victories, we are also striving to empower those who are marginalized and build long-term relationships with those in power.
Our goal is systemic change.  Feeding programs and shelters are fine stop gaps, but as a homeless woman told me, “I like it when people make me sandwiches, but I’d rather make my own sandwich in my own apartment.”
What ends chronic homelessness is permanent supportive housing (PSH). Those experiencing homelessness are sent not to a temporary shelter, but to permanent housing where they feel secure and can receive the services they need to thrive. Over 90% of those housed in PSH stay housed after three or more years. Marv’s place is a stellar example of PSH in Pasadena. Nineteen formerly homeless families live in this beautiful Mediterranean style apartment complex and all now have jobs and/or are attending college.
We work with and not just for our homeless neighbors, including those whose lives have been transformed by PSH. Those who have experienced homelessness are often the best advocates.
The need for housing and housing justice will no doubt intensify during this Covid 19 crisis. Many will face eviction and homelessness will dramatically increase unless we enact policies to prevent this from happening.
We Quakers have played an important role in addressing housing injustice in the past (among other things, we started Self-Help Enterprises, which became the inspiration for Habitat.) Today Orange Grove Meeting has become a center for housing justice in our city, and I’d like to see other Quaker meetings play a similar role. That’s why I have partnered with Western Friend to host a webinar called “Loving Your Neighborhood” on Thursday, August 6, at 7 pm. Together we’ll learn what Friends have done, and what we can do now, to address the homelessness and affordable housing crisis during this time of pandemic. This is not the time to hide what we know under a bushel. Let’s proclaim the good news from the rooftops: we know what it takes to end homelessness and poverty. Let’s work together to make ending homelessness and poverty a reality!

Anthony is a member of Orange Grove Meeting and former editor of Western Friend. The author and editor of numerous books and pamphlets (including Relics of America: the Fall of the American Empire, Transformative Quakers, Howard and Anna Brinton: Reinventors of Quakerism in the 20th Century, Interfaith Peacemaking, Western Quaker Reader, etc.) he serves on the Board of FCNL and Interfaith Communities Uniting for Justice and Peace. He is co-founder of Making Housing and Community Happen. If you’d like to become involved in peace or housing justice activism, contact Anthony at interfaithquaker@aol.com.  For more info, see makinghousinghappen.org and laquaker.blogspot.com. We are promoting affordable housing on many different fronts: inclusionary zoning, Safe Parking, Accessory Dwelling Units, converting motels to homeless housing, as well as building affordable housing on church land.