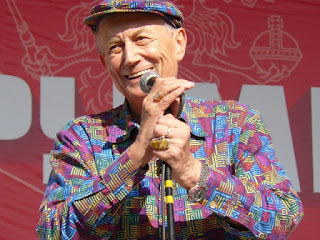 Today at ICUJP I want to talk  a Russian poet who hated borders and walls  and loved to build bridges of understanding and connection through his poetry. His name is Evgeny Yevtushenko and he died recently at age 84, on April 1st of this year. He was in many ways the Bob Dylan of the Soviet Union—a quirky, passionate defender of human rights and freedom. He became world famous by writing a poem called Babi Yar that denounced anti-semitism. He also denounced Stalinism, war, and everything else that stifled the human spirit. While I was helping to edit a Quaker-inspired collection of poetry and fiction in the Reagan era, I got to travel to the Soviet Union and visit Yevtushenko in his summer home, his dacha, in Peredelkino.  I’d like to share with you a poem he wrote in 1984, during the period known as Glasnost or Openness. The poem is called “On Borders.”
Before I do, I’d like to say something about my own journey and how it brought me to the Soviet Union. Poetry was my entrée into the Quaker peace movement. I’ve loved poetry all my life but wasn’t able to connect it to peace making until I moved to Philadelphia in 1984 and became involved with the Quakers. I was drawn to a book project that was to be edited and published in both countries as a way to overcome stereotypes by showing that Americans and Russians are not enemies but human beings. This idea intrigued me and I became one of the book’s editors and publicists.
Yevgeny Yuvtushenko loved the idea of our book and was eager to meet with us Quakers, as were many other Soviet writers. And we were thrilled to meet with him since he was a kind of rock star.  When he gave readings at this time, tens of thousands of people would show up, cheering him wildly.
Yevtushenko published his first book of poems when he was only 19 years old and his early work gained admirers in the West that included Robert Frost. But what made him famous was Babi Yar, a poem named after a place in the Ukraine where over 30,000 Jews were massacred. When Yevtushenko visited Babi Yar, he was outraged to discover that no monument commemorated this terrible slaughter. Anti-semitism was rampant in the Ukraine and in Russia, and some Ukrainians collaborated with the Nazis to kill Jews. In this poem, Yevtushenko identifies with those Jews who were killed and persecuted. He wrote:

“I myself am one massive, soundless scream
Above the thousand thousand buried here.
I am each old man here shot dead.
I am every child here shot dead.
Nothing in me will ever forget!
The “Internationale,” let is thunder
When the last anti-Semite on earth
Is buried forever.
In my blood there is no Jewish blood.
In their callous rage, all anti-Semites
Must hate me now as a Jew.
For that reason, I am a true Russian!

Yevtushenko saw himself as a true Russian, and true socialist,  because he had compassion for the poor, the oppressed, the victims of persecution. For Yevtushenkso, being a true Russian meant hating war and speaking out for justice. I’m sure he’d love to have visited a group like ours.
He was not a saint. He was an earthy Siberian who loved women and had many lovers and wives. When I met him, he had married his fourth and last wife, a teacher considerably younger than himself. He told us, “You probably think she seems very young. But when she is married to me for a while, she won’t seem so young.” The way he said it in his thick Siberian accent seemed very funny at the time.
He was also fascinated with religion. He wanted to know all about Quakerism and he shared with us how he gotten sick and visited a church and asked for healing in front of an icon. This was a surprising and a little shocking coming from a poet who grew up in a communist country where religion was frowned upon, but Yevtushenko had an open mind. He wasn’t interested in organized religion but he was certainly a spiritual person, like the poet Walt Whitman. He sensed the deep unity and connection between people and all life.
Today I’m sure he’d be appalled by Trumpism and the rise of bigoted nationalism in Europe and in Russia. Yevtushenko loved and was deeply rooted in his native land, but he was also an internationalist. From an early age he expressed his distaste for borders. In 1958, when he was 25 years old and there were severe travel restrictions on Russians traveling abroad, he wrote this simple, heart-felt and funny poem:

All these borders—
they
bug me! Nothing
do I know
of Buenos Aires , or
New York
–and I should
know! I should be able to go
to London
and walk around,
and talk to the people,
even if I can’t talk so good,
just walking
around. Like a little kid
I want to ride a bus
through Paris
some morning,
and I want an art
that is something
else, is an exciting sound—
like myself! 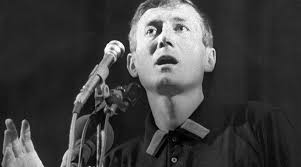 Yevtushenko’s poetry had a unique sound, brash, tender, naïve, worldly wise, passionate, funny, the sound of sometimes shockingly honest feeling, like Bob Dylan’s folk poetry. Yevtushenko’s poems spoke to a rising generation of Russians who were sick to death of the Iron Curtain and all that it represented. He became so popular the authorities didn’t know what to do with him, whether to jail him or hail him as a symbol of the post-Stalinist Soviet Union. Some radical dissidents considered him a sell out for not being more outspoken. But Yevtushenko was not afraid to take risks; he defended dissidents, and aligned himself with those on the cutting change of social change in his country. He was a dreamer, a visionary.
And his dream of overcoming borders come true. During the course of his career he traveled to over 92 countries to give poetry readings. And he got to teach in a place he loved—Tulsa, Oklahoma. Yes, he preferred Oklahoma to New York, probably because it reminded him of the little town where he grew in Siberia—Zima Station. Yevtushenko loved people, Americans as well as Russians…
That’s why we choose this poem to introduce our collection called the “The Human Experience.”
It’s a challenge to read one of Yevtushenko’s poems and do it justice.  A poet who heard Yevtushenko read in Madison, WI, wrote:

Forget your slams, your rap, your Bukowski sputtering drunk on stage. Check out Yevtushenko if you ever get the chance. He brought all of Russia, poetry, history, culture, his life to the stage. He shouted, whispered, sang to the rafters, laughed, appeared humble, aggressive, defiant, flailed his arms, pranced around the stage, even walked into the audience, ala the old Phil Donahue, reciting his poems by heart to people—to women, especially.

Well, I’m not going to go quite that far, but I will wear my Russian hat and try my best to read like a Russian, and hopefully give you some sense of what this unique Russian poet is like.

giving me orders..
I recognize only one race
the race of all races.
How foreign is the word foreigner!
I have four and a half billion leaders.
And I dance my Russian,
my death-defying dance
on the invisible threads
that connect the hearts of people.

Turning the Iron Curtain into a playground seemed like a poet’s fantasy in 1984, but 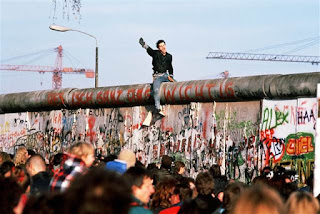 that’s in fact pretty much what happened with the dismantling of the Berlin Wall. The Cold War ended  thanks in part to dreamers like Yevtuskenko and peacenics like the Quakers and countless others. We not only dreamed of ending the Cold War, we also rolled up our sleeves and did our best to make it happen. As Yevtushenko said,

“My generation of poets did a lot of things to break the Iron Curtain. We wounded our hands breaking this Iron Curtain with our naked hands. We didn't work in gloves.”

I think we can learn a lot from this extraordinary event. Today we need to use the same tools to break down the walls of Trumpism. We need imagination and hard work, we need poets and activists, workers and dreamers, teachers and students, people of faith and people of conscience, mothers and fathers, a coalition of all colors and ethnicities and sexual orientations, all working together to tear down walls of fear and build bridges of peace and understanding. As an American poet Robert Frost said, “Something there is that doesn’t love a wall, that wants it down.” Can I get an Amen?